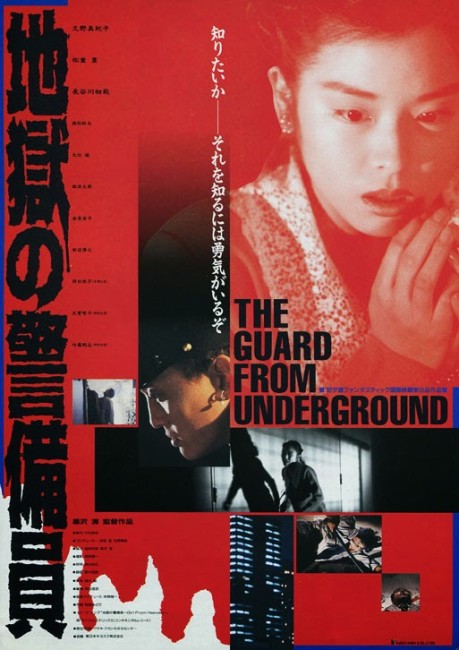 Akiko Narushima starts a job as an art expert in the mysterious Department 12 of the Akebono Corporation. Her co-workers all appear odd in various ways, including her boss Kurume who attempts to expose himself to her. At the same time, a new security guard, the giant-sized Fujimaru, has started work in the building. Akiko is accidentally locked in the documents room and is scared when someone tries to batter down the door. Afterwards, she becomes concerned when she finds that Fujimaru is wearing an earring that she dropped and has stolen her id photo. Fellow security guard Nomiya finds dead bodies piling up and discovers that Fujimaru is killing people. One night Fujimaru locks all the members of Department 12 in the building and starts killing everybody in turn.

Japan’s Kiyoshi Kurosawa is a genre director who is gradually becoming better known in the West, even potentially developing a cult. Kiyoshi Kurosawa makes films that are often baffling and unfathomable but also have an undeniably effective mood. Kurosawa had made the likes of the haunted house film Sweet Home (1989); Cure (1997) about hypnotised killings; Serpent’s Path (1997) and Eyes of the Spider (1998), both darkly studies study in obsessive revenge; Charisma (1999) about an enigmatic tree; the medium thriller Seance (2000); the ghost story Pulse (2001), probably his most well-known film; Bright Future (2003), a strangely unfathomable film about two frustrated workers and an amok jellyfish; Doppelganger (2003) about an overworked man being helped out by a mysterious double; the mummy film Loft (2005); the ghost story Retribution (2006); the dreamscape film Real (2013); the ghost story Daguerreotype (2016); and the alien invasion film Before We Vanish (2017) and its follow-up Foreboding (2017). Guard from the Underground was one of his earliest films.

Though it is early Kiyoshi Kurosawa, Guard from the Underground has an undeniable mood and above all a considerable strangeness to it. Initially, for at least a good half of the film, one sits there wondering what on Earth is going on. Kurosawa’s visual style is banal and rather dull. The pace of the film is slow and not that much seems to happen, while the score seems something like the muzak lifted from a low-budget 1980s video release. You are not sure what Guard from the Underground is meant to be about or even what type of film it is that you are watching.

It appears to be shaping up to be some kind of peculiar deadpan comedy about office politics. We watch as Makiko Kuro takes up in her new job in a department that nobody else in the building seems to know about. Kurosawa sets up some odd characters around her – her boss Kurume who is prone to random outbursts of anger and at one point calls her into his office and starts taking his clothes off; Hatsunori Hasegawa as some high-up in the firm who seems to spend all his time sleeping in his office and avoiding doing any work and when he meets Makiko Kuro goes on at length about how incompetent all the others in her department are; and most of all the impressively imposing seven-foot tall Matsushige Yutaka as the guard whose face is not seen for the bulk of the film and is then found having stolen her id photo and to be wearing her dropped earring. There are some decidedly strange happenings – like Makiko Kuro’s visit to the documents room where she gets accidentally locked in and something (quite possibly supernatural, it seems) starts trying to batter down a locked door.

About halfway through Guard from the Underground, it eventually becomes apparent that what we are seeing is a slasher film of sorts. The threateningly tall security guard Matsushige Yutaka is really another variant on Jason out of the Friday the 13th sequels, or even more so Matt Cordell in Maniac Cop (1988) and sequels. What we in fact end up with is a slasher movie with a very odd sense of humour – a cross between Maniac Cop and The Office (2001-3) perhaps? In an American exploitation equivalent, the film would likely focus on the stalking scenes but here these never emerge proper until about the last third of the show, with most of the rest of the film being taken up by Kiyoshi Kurosawa’s wilfully strange portrait of the office environment.

Certainly, when it comes to the horror elements, Kiyoshi Kurosawa produces a number of brutal jolts – various scenes with Matsushige Yutaka appearing and suddenly bashing victims in the head with an aluminium baseball bat; an especially nasty scene where he holds the character of Nonomura down in the kitchen and beats his head with the bat and then a saucepan, before pouring a jug of boiling water over him; and another scene where he forces Miss Tadaka into a locker, shuts the door and then batters the locker with his body until it crushes and blood runs out. Strange, baffling but, like most of Kiyoshi Kurosawa’s films, eventually quite compulsive.