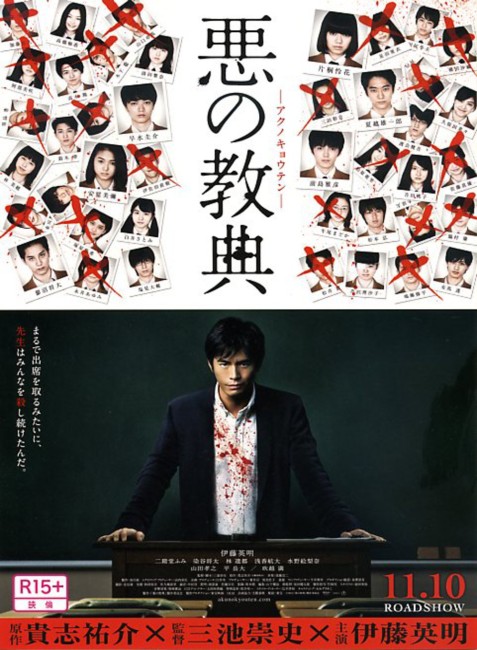 Seiji Hasumi is a popular and charismatic English teacher at a Japanese high school. Behind the smiling mask of civility, Seiji begins to blackmail and extort pupils and other teachers and then murder them when they threaten exposure. This culminates one evening as he starts hunting a group of pupils that he suspects of cheating through the school with a shotgun, massacring them en masse.

Japan’s Takashi Miike is a cult director. Miike emerged around 2000 and made a name for himself with wild and crazy films like Audition (1999), Ichi the Killer (2001) and Visitor Q (2001), which went to extremes of violence and/or pushed things way across taboo lines, along with other efforts like Dead or Alive (1999), The Happiness of the Katakuris (2001) and Gozu (2003) that were applauded for their sheer dementia. Miike has been extremely prolific, putting out 3-4 films per year, sometimes twice that, and placing his fingers into dozens of genres.

To the disappointment of the Miike cult, as soon as his name began to grow, rather than continue in the same vein, he began to veer off into a series of experiments that left everybody scratching their heads with the likes of Gozu (2003), the incomprehensible sf/gay prison love story Big Bang Love, Juvenile A (2006), the Japanese Western Sukiyaki Django Western (2007), God’s Puzzle (2008), the madcap YatterMan (2009) and Yakuza Apocalypse (2015).

Lesson of the Evil received some negative reviews. My impression is that most of these detractors got bored with the long preamble where Miike takes up nearly an hour of the running time with the not terribly interesting lives of the staff and pupils at the high school. This is the sort of film – the slice of high school life, which often merges into the juvenile delinquency genre – that the Japanese make with a good deal of regularity. Indeed, Takashi Miike has dabbled in this genre before, most notably with the Crows Zero films.

However, around the one-hour mark, Lesson of the Evil suddenly gets interesting. This is the point where Hideaki Ito follows fellow teacher Mitsuru Fukikoshi onto the subway and abruptly hangs him from the handrail by the strap of the man’s satchel. Next, Ito replaces the bottles of water surrounding an annoying parent’s home with gasoline and blows him up, followed by his binding and gagging pupil Shota Sometani with masking tape and torturing him with a soldering iron. It is finally, after a long absence, Takashi Miike returning to the perversely ultra-violent films that gained him his cult name.

Thereafter, Lesson of the Evil kicks in with a perverse pleasure. There’s the scene where Hideaki Ito takes Erina Mizuno, the student he has been sleeping with, to the school’s rooftop, bashes her unconscious with a plastic bag filled with fruit and prepares to drop her over the side in an apparent suicide, only to be interrupted by her friend and turn and snap the friend’s neck.

The rest of the film takes place in a series of scenes as Hideaki Ito moves through the school, blowing pupils away en masse with a shotgun. Unlike the coolly neutral point-of-view of a similar film like Elephant (2003) that set out to examine the US school shooting phenomenon, Miike is clearly enjoying the carnage. The students and others teachers are so slimly characterised they rarely attain much individuality and all of the emotional focus of the film is on Hideaki Ito’s psychopathic teacher.

If you look at the outrage, shock and public grief that surrounded real-world incidents like Columbine, Sandy Hook and Virginia Tech et al, you can see that Miike’s stepping over to effectively cheer on the shooter seems to be he once again gleefully crossing a taboo line. In the US, a film that took sympathy with a school shooter (let alone had the teacher be the shooter) would be regarded with outrage and calls for its banning. Stephen King, for instance, felt an obligation to withdraw his Richard Bachman school shooting novel Rage (1977) from print after the dramatic rise of school shootings in the 1990s.

As with all of Miike’s other films throughout the 00s, Lesson of the Evil includes several surreal touches where it is often a scratch of the head trying to work out what he is trying to do. Here he includes several songs from Berthold Brecht – even a flashback where Hideaki Ito is having a conversation with an American (that takes place all in English) about Brecht, Kurt Weil and the superiority of the original moritat versions of the songs while cleaning up buckets of gore. The film ends with the bizarre credit ‘to be continued’, although short of following Hideaki Ito’s trial for mass murder, it is hard to see how this could work.

Takashi Miike’s other genre films are:– Full Metal Yakuza (1997), a yakuza/cyborg film; the teen film Andromedia (1998) about a schoolgirl resurrected as a computer program; The Bird People in China (1998) about the discovery of a lost culture; the torture and sadism film Audition (1999), the Yakuza film Dead or Alive (1999), which comes with a gonzo sf ending; the surreal Dead or Alive 2 – Birds (2000); the six-hour tv mini-series MPD Psycho (2000) about a split-personalitied cop tracking body-hopping terrorists; the surreal black comedy The Happiness of the Katakuris (2001); Ichi the Killer (2001), a Yakuza film with some extreme torture scenes; the controversial taboo-defying Visitor Q (2001) about a mysterious visitor; the Cyberpunk future-set Dead or Alive: Final (2002); the surreal Yakuza film Gozu (2003); One Missed Call (2003) about ghostly cellphone calls; the ultra-violent Izo (2004) about a cursed, immortal samurai; an episode of the horror anthology Three … Extremes (2004); the superhero film Zebraman (2004); the fairytale Demon Pond (2005); the supernatural fantasy epic The Great Yokai War (2005); Big Bang Love, Juvenile A (2006), a prison murder mystery with SF elements; the SF film God’s Puzzle (2008); YatterMan (2009), a gonzo live-action remake of a superpowered anime tv series; Zebraman 2: Attack on Zebra City (2010); the videogame adaptation Ace Attorney (2012); As the Gods Will (2014) with high school students being slaughtered by a doll; Over Your Dead Body (2014) wherein the roles in a ghost story play come to replay themselves in the lives of the actors; the gonzo horror film Yakuza Apocalypse (2015); Terra Formars (2016) about giant mutated cockroaches on Mars; Blade of the Immortal (2017) about an immortal samurai; JoJo’s Bizarre Adventure: Diamond is Unbreakable – Chapter 1 (2017); Laplace’s Witch (2018); and The Great Yokai War: Guardians (2021).