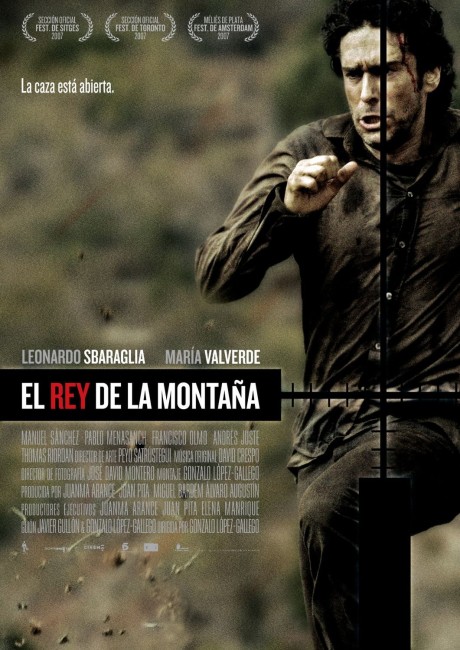 Quim is driving to see his ex-girlfriend in the countryside. As he stops at a gas station, he sees a girl Bea stealing a chocolate bar. He follows her into the ladies’ bathroom and they have sex. Afterwards he discovers that she has stolen his wallet. He races after her but suddenly someone shoots at him, hitting his car. Fleeing from the shooter, Quim runs into and kills a man that steps out into the middle of the road. Forced to continue on foot, Quim comes across Bea whose tires have been shot out. They travel on in her car but are arrested by two police officers for killing the man on the road. The unseen hunters then shoot the two policemen. Quim and Bea are forced to flee across the countryside on foot, hunted all the while by their mysterious pursuers.

The Backwoods Brutality genre was at a peak of the 1970s, as popularised by films like Straw Dogs (1971), Deliverance (1972), The Last House on the Left (1972), The Texas Chain Saw Massacre (1974) and The Hills Have Eyes (1977). Common to the genre were the recurrent themes of people from the city straying into the backwoods where they were savagely assaulted by the locals and forced to abandon the veneer of civilisation in order to fight back.

The Spanish-made King of the Hill – which is not in any way related to the popular satirical US animated tv series King of the Hill (1997-2010) – is another entry in this European Backwoods Brutality cycle. There are a number of similarities between King of the Hill and Them – both films keep the assailants pursuing the couple as shadowy figures before revealing them to be children at the end, while both films leave explanations for what is happening at a scanty minimum, while the cross-country pursuit by disturbed children was also a feature of the British Eden Lake. Indeed, very little that happens in King of the Hill that is ever given much explanation – like why Maria Valverde steals Leonardo Sbaraglia’s wallet? Or even if the car with the baby seat in the back is hers or stolen too? Who the boys are and why they are hunting people? Or who the man that Leonardo Sbaraglia runs over is and what his relation to the boys is?

Director Gonzalo Lopez-Gallego does well. He does not show the central characters being brutalised and tortured to extremes as Eli Roth or Darren Lynn Bousman might – King of the Hill is relatively restrained in the gore department. Essentially, Lopez-Gallego sets the situation up in the most minimally sketched terms possible – we learn nothing about Leonardo Sbaraglia (what he does, why he is going to visit his girlfriend, anything beyond a name) and even less about why things are happening – and then keeps throwing spins and jolting twists on it – Leonardo Sbaraglia finding his wallet has been stolen, the shots abruptly fired at his car out of nowhere, the arrests, the shooting of the police officers.

The hunters are hardly seen until about the last ten minutes of the film – appearing only as distant figures on hilltops or more commonly represented by bullets flying out of the blue – the focus of the film is on the harrowing struggle for survival by the victims. Everything hovers with an uncertainty – we know so little about the situation that we cannot be certain for much of the film whether Maria Valverde stole Leonardo Sbaraglia’s wallet to lure him away or whether the two policemen are part of the backwoods assault as well. Lopez-Gallego puts us through some harrowing moments – notably the traversal of the rocks where bullets start coming and the constable gets trapped between rocks with a broken leg – and succeeds in giving us a more than fair run-through for our money.