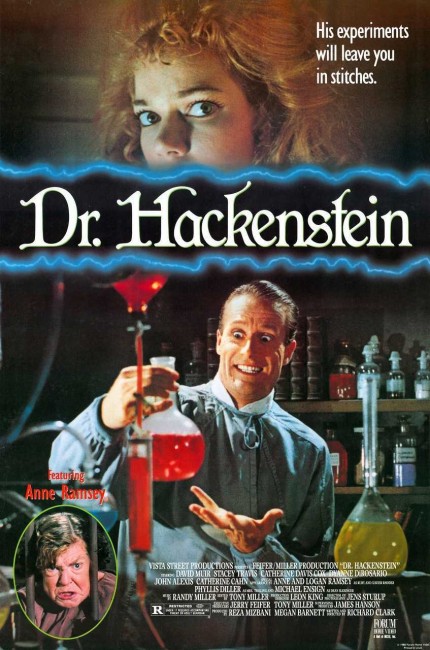 It is 1909. Dr Elliot Hackenstein shows Dean Slesinger his plan to attach his wife’s Sheila’s decapitated but still-living head to a body and bring it back to life. The Dean is so outraged he has a heart attack. Hackenstein needs three females corpses to build the body. These are conveniently provided when three nubile, bitchy cousins crash their car in the area and come to Hackenstein’s house looking for help. Over the course of the night, he contrives to lure them to his laboratory where he proceeds to carve them up.

This inept no-budgeter goes cheaply where Re-Animator (1985) and a host of B-budget Frankenstein films of the 1960s and 70s trod before.

You know you are in for something bad when the film shows three girls travelling through the countryside and then cuts to mad scientist David Muir saying, “I need three female bodies to bring my wife back to life.” The dialogue is some of the worst to ever grace a horror film – the head comes out with observations like “No wonder I have a splitting headache, I’m only a head.” David Muir colludes such excruciating prose as “ghosts of wonder, phantasms of inquisitiveness” and comments during a love reminiscence, “My beloved Sheila, you are disintegrating before my eyes.”

It is like a comedy that fails to get started, although the score certainly makes a determined attempt to play it as such. The film’s attempt at period setting looks miserably cheap. The ending does one of those what-happened-to-everybody comic bios.