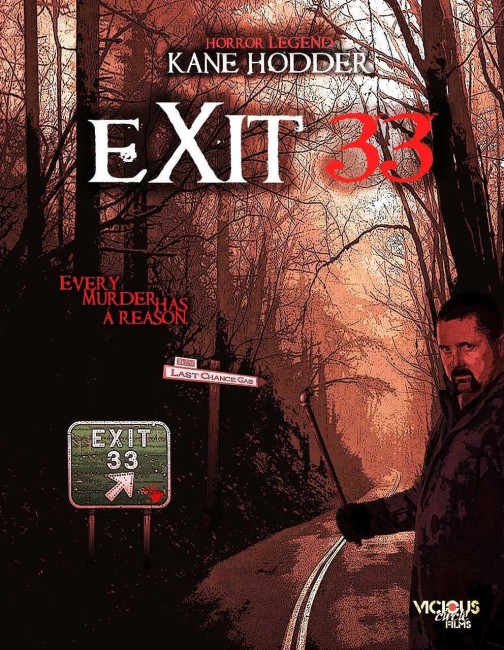 Angie sets out driving to her five-year high school reunion. Her friend Eva and Eva’s boyfriend Dax drive on ahead. Unknown to Angie, following behind is her boyfriend Matt who feigned disinterest in attending but is coming to surprise her with a proposal. They and several others variously contrive to turn off at Exit 33 to Ike’s Last Chance Gas. The hulking owner Ike has been traumatically shattered after he shot his wife during a hunting accident. He sabotages the gas he puts in the cars, causing them to have to pull over down the road, whereupon he abducts, makes prisoner and tortures those inside.

From its opening scenes, Exit 33 gives you the impression of a horror film made by hillbillies or back country rednecks. (The plethora of people with the same last names on the credits cannot help but give the impression of a very in-bred production). The opening credits play out against a montage of hunters shooting and gutting animals, as a jaunty country-and-western song plays on the soundtrack. You are not sure how any of this relates to the film that follows – at most, there are characters of two hunting buddies that turn up to the gas station later in the show and become victims. Nor do these hunting scenes seem part of the horror ie. the film seems to regard them as salutary and the implication is made that the audience watching Exit 33 will too. In a similar vein, the end credits rather nauseatingly take place against scenes of animals being slaughtered and the carcasses skinned in great detail. For most non-redneck/hunting aficionados (like me), this only serves to disgust.

The sole recognisable name anywhere in the film is that of Kane Hodder who played Jason Voorhees in Friday the 13th Part VII: The New Blood (1988) and the successive entries in the series through to Jason X (2001). This is something that Hodder subsequently built out into a career in numerous B horror movies. The 6’3″ Hodder is an impressively lethal presence and has employed that to great effect in other film appearances.

Alas, in Exit 33 Hodder is employed in a role that is essentially that of a regular guy – another variant on the backwoods psycho of Norman Bates from Psycho (1960). You feel that in doing so the film wastes the potential presence that Kane Hodder brings with him to the role. Hodder works when he is big and menacing. Stripped of the hockey mask, he is simply a big, beefy middle-aged guy who never says much. The film also signals its fannish obsequiousness in clunky obvious ways by having Hodder reading a copy of Fangoria and saying “scary” or one of the victims turning up wearing a Night of the Living Dead (1968) T-shirt.

Tommy Brunswick creates a dull film. Exit 33 is a hack movie, conducted with no originality, depth or suspense. Indeed, the film is dull to the point of inertia. Nothing happens throughout other than various people turning up at the gas station and predictably being killed/made prisoners by Kane Hodder, followed by more people turning up, becoming victims etc. There is nothing else to the film beyond this. A film like this can usually pepper things up with a high gore content but this is lacking, apart from a nasty scene where Hodder tears the skin off a woman’s back.

The film also tries to throw in a lame M. Night Shyamalan-styled twist ending where it reveals that the child that has accompanied Kane Hodder throughout is only a figment in his imagination. This is a revelation of astonishing unimportance and ends up being probably the single dullest Shyamalan-esque left field twist ending in memory.