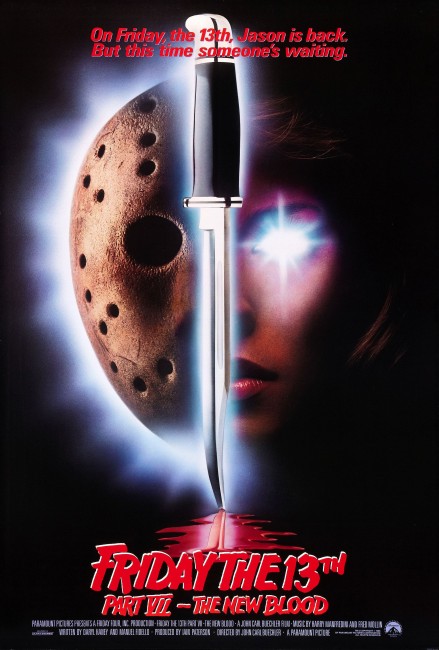 At the insistence of her psychiatrist, teenager Tina Shepard returns to her Crystal Lake shore home where she once inadvertently killed her father with her psychic powers. However, the visit stirs up Tina’s repressed anger. Unable to vent her emotions, she unwittingly directs her psychic powers into the lake. However, this succeeds in reviving Jason Voorhees where he is buried at the bottom of the lake. The revived Jason then starts slaughtering Tina’s friends.

The Friday the 13th series was one of those phenomena of the 1980s. These days they are viewed through the lens of nostalgia but nobody writing about the films at te time had anything good to say about them. Despite this, audiences lapped them to the point the series generated ten sequels (see bottom of the page for the other entries). On the whole, Friday the 13th Part VII: The New Blood film is much the same as the preceding six efforts in the Friday the 13th series.

In a bizarre need to add some novelty to the series, here the formula has been crosshatched with Carrie (1976). The results are fairly ludicrous – the psychic powers manifest in a series of absurd effects set-pieces with flying tv sets, collapsing piers, popping strings of pearls and an extremely silly final scene where the heroine brings her father back as a psychically enervated zombie to dispatch Jason. Elsewhere, it is the same old hack and stab. However, a tiredness seems to have set into the series.

The director this time is John Carl Buechler – better known as the head of Magical Media Imageries, which provided the low budget makeup effects for many Empire Studios productions such as Ghoulies (1985), Re-Animator (1985), Troll (1986) and others and developed out a minor career as a director (see below).

Directorially, Buechler never seem concerned to charge up even the most rudimentary suspense. What’s more, there is not even the usual quota of sex and blood to enliven things – it seems that the MPAA have had the last say and finally all but emasculated Jason. In fairness, there are one or two decent moments – an attack on a victim using a hand-held hedgeclipper, and a scene where Jason picks up one person in a sleeping bag and kills them by bashing them against a tree – and it is occasional pieces like this and a plot that it is certainly different to any other entry in the series that make Friday the 13th Part VII: The New Blood a more interesting effort than usual. Although, recommending it for such seems about as worthwhile as trying to recommend a demolished building as a tourist site because someone has painted the rubble.

Kane Hodder made his first appearance as Jason here and played the role in the next three sequels. He has gone on to become a fan favourite and has made numerous appearances in other horror films out of mask.

Although mostly known for his cheap makeup effects under the company MMI (which is variousl said to stand for Mechanical and Makeup Imageries and Magical Media Industries), John Carl Buechler has made a number of other low-budget genre films including an episode of The Dungeonmaster (1984), Troll (1986), Cellar Dweller (1988), Ghoulies III: Ghoulies Go to College (1991), Watchers Reborn (1998), A Light in the Forest (2002), Deep Freeze (2003), Curse of the Forty-Niner (2003), The Eden Formula (2006) and The Strange Case of Dr. Jekyll and Mr. Hyde (2006).