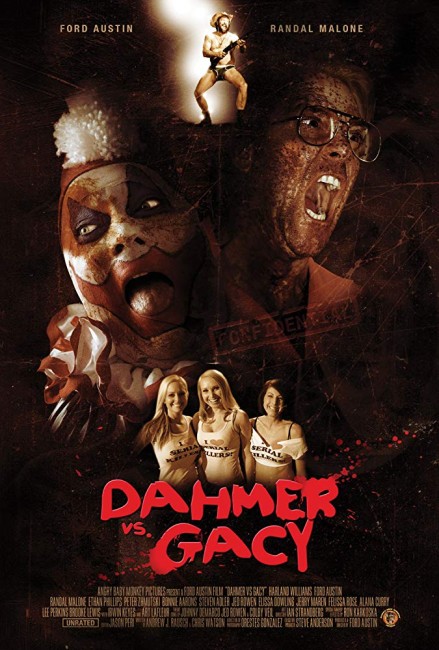 The military have mounted the top secret Project X-13 in an attempt to create the ultimate weapon – by cloning the most notorious serial killers in history. However, a fire in the laboratory causes clones of Jeffrey Dahmer and John Wayne Gacy to escape. The two go on new killing sprees, which catches the attention of the media and gains them fans. Meanwhile, Ringo, an Iraq War veteran suffering from hallucinations, is told by God to arm himself and follow directions. As Gacy goes to the home of X-13 head Dr Stravinski to settle the score with him, Dahmer also heads there for a showdown with Gacy. At the same time, the project’s military head has taken the reckless step of unleashing the X-13, the project’s ultimate killing machine, to eliminate both Dahmer and Gacy.

Ever since the great success enjoyed by the likes of Freddy vs. Jason (2003), AVP: Alien vs Predator (2004) and dvd shelf hits such as Boa vs Python (2004) and Mega Shark vs Giant Octopus (2009), the ‘versus’ concept title has become the in thing in horror. Filmmakers now seem to be attempting to come up with the most absurd and conceptually mismatched titles they can think of. Dahmer vs Gacy certainly has an arresting absurdity when you first hear it that makes you immediately want to watch the film to find out what it is about. Shame then that the film itself fails to match up to the conceptual wackiness that went into conceiving the title. Indeed, most of these ‘versus’ titles seem more like the old posters that AIP used to come up with – The Beast with a Million Eyes (1955), Teenage Caveman (1958), Attack of the Giant Leeches (1959) – that were designed as something sensationalistic and lurid, before filmmakers were then given the assignment to go away and make a film to go with them, which almost invariably always disappointed on the promise that had been offered.

Dahmer vs Gacy is made by Ford Austin, a child actor of the 1970s who had minor roles in some classic tv series of the era. Ford Austin has made a variety of other films as director with the genre likes of Cerebral Print: The Secret Files (2005), The Curse of Lizzie Borden (2006), Gothic Vampires from Hell (2007), Attitude for Destruction (2008), Grappling With Your Demons (2008) and Aliens vs. A-holes (2012).

With Dahmer vs Gacy, Ford Austin hits in with a gungily cheap and sarcastic gonzo approach. This is something that has become prevalent down the low-budget end of the market in recent years – see the films of Troma or something like Uwe Boll’s Postal (2007), perhaps at best the cult hit of Hobo with a Shotgun (2011). Surprisingly, the idea of a cloned version of a serial killer has been conducted before with the more serious-minded Jean-Claude Van Damme vehicle Replicant (2001). (To some extent, there was also Virtuosity (1995) about collective serial killer personalities replicated inside a nanotech android). Dahmer vs Gacy is however the first to conduct the idea with existing real world serial killers. That said, it has to largely ignore the pathology of either killer – neither Dahmer nor Gacy were random spree killers who targeted anybody they came across, both operated out of specific sexual urges and primary among these was the need to dominate and control rather than simply slaughter their victims. The film even shows Dahmer, who was gay in real life, enjoying the sexual favours of a woman at one point.

As with Troma, Ford Austin’s idea seems to be to set out to offend as many people as possible in lieu of any of the other basics of filmmaking. There is plentiful cheap-looking gore. There is also expectedly that which enters into highly dubious taste – scenes with Jeffrey Dahmer (played by Ford Austin) humping a corpse. On the other hand, most of the film becomes tediously repetitive. There seems to be no plot driving it for at least two-thirds of the show – just interspersed news broadcast scenes of various people reacting to the killing sprees; occasional scenes with Dahmer and Gacy killing people; and cuts back to the military and scientists. Some of the scenes seen decidedly random – monologues from Ringo (also played by Ford Austin) confessing to sexual fantasies about Anne Robinson from The Weakest Link (2000-12) and a super-awful scene where Bonnie Aarons’ thoroughly over-acted general has a meltdown.

The film does pick up somewhat during the last fifteen or so minutes when it has Dahmer and Gacy turn up for a showdown. Here the film does show that it has at least read up on both killers and has each taunting the other about their mutual shortcomings and stupidities, before breaking into a fight. The most amusingly wacky part of the film comes with the introduction of X-13, played by a nonchalantly unassuming corncob-chewing Ethan Phillips, who engages in a battle of taunts with Dahmer before killing everybody remaining.

On the other hand, Dahmer vs Gacy also mocks its own shortcomings in a way that is only self-deprecating. There is a scene between General Bonnie Aarons and Sergeant Jed Rowen where they are talking about what has happened as a potential film scenario: “Dahmer vs Gacy – God, that movie would turn out to be such a piece of shit. A regular Plan 9 from Outer Space [1959].” When a film starts seeing Edward D. Wood Jr films as a point of comparison for itself, you can only think that its’ sense of self-aspiration may be aiming just a little too low.

Dahmer vs Gacy has been cheaply made. This is evident in the cut-price sets, the often ragged camera set-ups and choppy editing. Ford Austin does get in minor roles from slightly known actors such as Art La Fleur, comic Harland Williams and Ethan Phillips, a regular from Star Trek: Voyager (1995-2001), where you get the impression that most of these came on board for about one-to-two days apiece, which was all the production could afford to pay them.