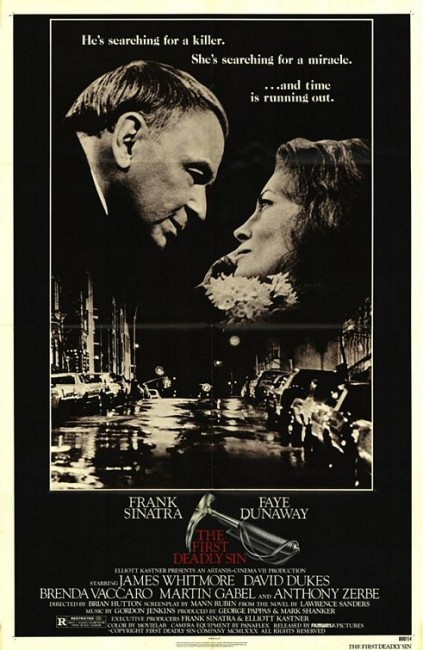 NYPD detective Edward Delaney is only several weeks from retirement. His wife Barbara has fallen ill and been taken to hospital. He tries to convince his superiors of the existence of a serial killer but is told to sit back and take it easy until his retirement. He ignores this and decides to pursue the case singlehandedly.

The film was adapted from a best-selling book, The First Deadly Sin (1973) by Lawrence Sanders, which led to three follow-ups, numerically going all the way up to The Fourth Deadly Sin (1985). This is a surprisingly lifeless police procedural.

It was not until after The Silence of the Lambs (1991) that filmmakers learned how to co-opt the strictures of forensic psychology and make this type of film compulsive. Back at this time (the late 1970s) these type of stories were told principally as detective stories. In the film, the thriller aspect is incredibly lacklustre – after a mildly promising build-up, the psycho of the show is cursorily shot by Frank Sinatra’s detective at the climax.

The First Deadly Sin is dreary. Stars Frank Sinatra and Faye Dunaway are made to look aged and rundown, the film is about their encroaching old age and this makes the film an exercise in tedium. One of the few bright moments in the film come from Martin Gabel as the armourer who joins Sinatra – there is an amusing scene in a hardware store with him nonchalantly asking a clerk about the best hammer for killing a person.

It was no great surprise, except it seems to the filmmakers themselves, that audiences failed to flock to The First Deadly Sin. The film was originally to have been directed by Don Siegel and then passed into the hands of Roman Polanski. Polanski would have been guaranteed to have made a more interesting film out of it than the eventually assigned Brian G. Hutton has. Of course, Polanski had to abandon the film after fleeing the US when he was charged with having sex with a minor.

Elsewhere, Brian G. Hutton is mostly known for war films such as Where Eagles Dare (1968) and Kelly’s Heroes (1970). His one other film of genre interest was the Elizabeth Taylor psycho-thriller Night Watch (1973).