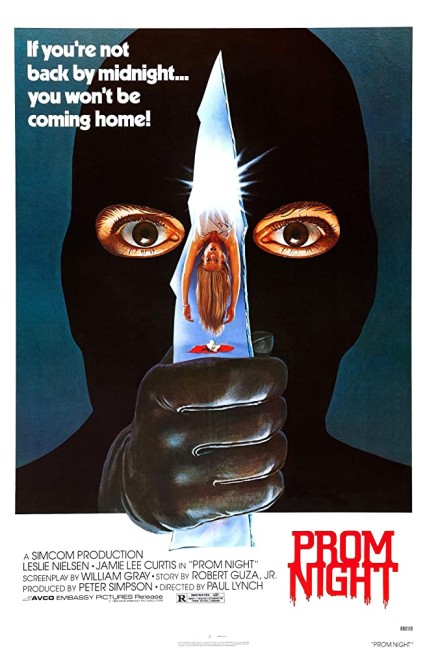 In 1974, a group of kids are playing in a ruined building and cruelly force one of their number Robin Hammond out a window to her death. Afterwards, they swear to cover up what happened. Six years later and it is prom night for the four now-teenage kids. As the prom begins, a black-hooded figure appears and starts killing them.

Prom Night was one of the earliest films to jump on the slasher bandwagon that began with Halloween (1978) and Friday the 13th (1980). It was also one of the slasher efforts to feature Jamie Lee Curtis before she refused to become typecast as a slasher movie heroine. (Certainly, with the undistinguished and poorly written part she is given here, it is not hard to see why she tired of such fare).

Prom Night is fairly dismal, even as the diminished expectations of the slasher genre goes. It takes forever to get going – the first hour of the film takes place almost entirely without anything in the way of significant plot development. It is interspersed with scenes where Jamie Lee Curtis, for no apparent reason, is attacked by a fellow student in the school cafeteria wearing a balaclava.

The killing scenes, when they come, have a base competence and are standard fare for the genre. They are however interspersed with a large amount of second unit disco dancing footage, which drags proceedings out in a big way. There is a mildly amusing scene where one student gets his head lopped off as he is about to be crowned prom king – even though the scene is a direct steal from Carrie (1976), which also must count as one of the film’s major sources of inspiration. The revelation of the killer – despite the raising of a number of red herring suspects – could almost have been chosen at random from the cast list for all the surprise relevance it has.

For no apparent reason, Prom Night has also inspired a series of sequels, all of which are tongue-in-cheek efforts centered around supernaturally avenging super-bitch Mary Lou Maloney and have no connection to this film beyond the title. The other films are:– Hello Mary Lou: Prom Night II (1987) and Prom Night III: The Last Kiss (1990), while there is also a Prom Night IV: Deliver Us from Evil (1991), which is unrelated to any of the others and concerns a psycho priest. Amid the spate of 1970s/80s horror remakes that came out in the 00s, Prom Night was very loosely remade as Prom Night (2008).