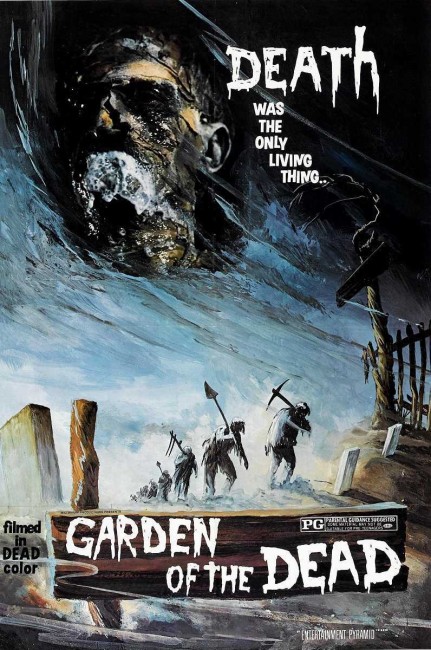 At the Camp Hoover prison work facility in Windsor, Colorado, the inmates entertain themselves by getting high sniffing formaldehyde fumes. Several of the group organise a prison breakout but are hunted down and shot by the warders as their getaway truck crashes. The warden orders the bodies buried but because of their inhalation of formaldehyde, the prisoners rise from the grave as zombies.

George Romero’s Night of the Living Dead (1968) changed the face of the zombie film, taking the zombie away from Caribbean voodoo ritual and forever identifying it with the risen dead mindlessly stumbling about, seeking to devour the flesh of the living. A decade later, Romero’s Dawn of the Dead (1978) added copious amounts of gore and intestine munching to the equation and it is from this that most modern zombie films take their influence. There were however a small number of films during that first decade (1968-1978) that came out directly influenced by Night of the Living Dead. Garden of the Dead was one of these – a 59-minute film that was released as the bottom half of a double-bill with Grave of the Vampire (1972), also from director John Hayes.

Given that Garden of the Dead was made fairly soon into the modern zombie film, some of the zombie behaviour is quite different to what we have subsequently become accustomed to. For one, that zombies seem a lot more alert that the stumbling dead we usually get – they can talk, organise together as a group and seem sufficiently in command of their faculties to wield tools. The film also dispenses with the usual shoot-them-in-the-head-to-kill-them imperative and it is rather contrivedly discovered that the zombies have a vulnerability to light. (As an interesting trivia aside, while most of the zombies here are slow-moving, this may well have been the very first film to feature fast-moving zombies).

What does surprise you about Garden of the Dead is that it is well made and takes itself seriously. John Hayes shoots the show with a gritty realism and this works well when segueing from the initial scenes with the chain gang and the tough warden to the dead rising from the grave and coming back after the living. There are some well sustained directorial sequences – one where Susan Charney wakes and glances out to see the zombies hacking apart her neighbour through the window of his camper, followed by her trailer being surrounded by zombies pressing in at all of the windows. There is also the sequence near the end where John Dennis leads several survivors to safety in the zone protected by a spotlight only for the light to start sputtering out. Your only real complaint is that the whole zombie mini-apocalypse is over and done with fairly quickly due to the film’s brief running time.