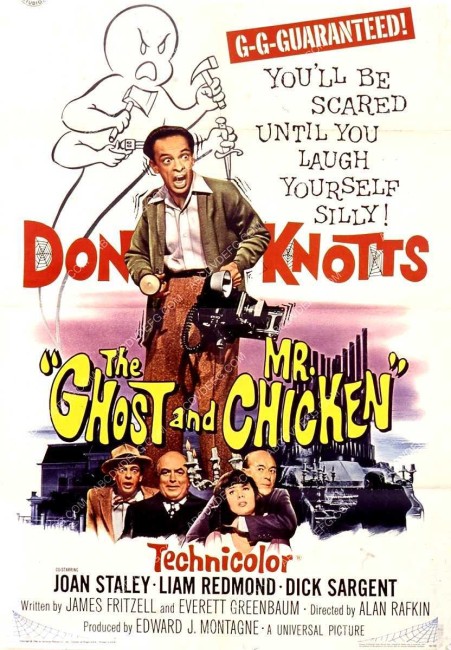 Luther Heggs is a typesetter with dreams of becoming a reporter at the local newspaper in Rachel, Kansas. Luther becomes a laughing stock after he rushes to the police station to report that a neighbour has been killed, only for the neighbour to walk in having merely been knocked out. Reporter Ollie Weaver takes every opportunity to make fun of Luther over this. It is announced that the old, reputedly haunted Simmons House, where the owner and his wife were murdered twenty years earlier, is about to be demolished. Luther’s co-worker Kelsey suggests that he write a piece about the history of the house. This is printed without the others at the paper realising that Luther wrote it and becomes the talk of the town. Ollie then dares Luther to spend the night in the house and write a front-page article about it. The nervous Luther plucks up the courage to take the challenge but flees from the house after witnessing spooky phenomena. He writes an article about this, only to be sued by Nicholas Simmons, the current owner of the house, for defamation of character. Luther’s only recourse is to prove to the court that the ghosts in the house are real.

Don Knotts (1924-2006) was a comedian who gained popularity in the 1950s and 60s. Originally starting out with a ventriloquist act, Knotts found recognition on Broadway and radio then landed his most famous role as Deputy Barney Fife on tv’s The Andy Griffith Show (1960-8). Knotts was able to spin this out into a film career with the likes of The Incredible Mr Limpet (1964), The Reluctant Astronaut (1967) and The Shakiest Gun in the West (1968). In later years, he appeared in several Disney live-action films and was a regular on tv’s Three’s Company (1977-84).

The Ghost and Mr. Chicken was Knotts’ venture into the Old Dark House film – the title is a play on the classic ghost romance film The Ghost and Mrs Muir (1947). The film feels like a throwback to the early 1940s after the success of the Bob Hope comedy remake of The Cat and the Canary (1939). Subsequently, a number of comedians of the era visited Old Dark House including The Ritz Brothers in The Gorilla (1939), Abbott and Costello in Hold That Ghost (1941), Laurel and Hardy in A-Haunting We Will Go (1942), as well as the East Side Kids/Bowery Boys who made no less than five ventures into the genre including Spooks Run Wild (1941) and Ghosts on the Loose (1943). These held a few scares, lots of laughs and one-liners, while anything spooky would be resolved as being of mundane origin by the end of the show.

Don Knotts perfected a certain schtick routine – one based around elastic-faced double-takes and a knee-knocking fearfulness. (It is hard to think that something like that would hold any appeal among today’s audiences). Much of the film is centred around placing Knotts into these routines to which he plays to standard without delivering anything that comes across as particularly funny. (Or maybe that’s just my taste in comedy). The script seems somewhat haphazard, not to mention improbable – Knott’s one paragraph story about the anniversary of the murders suddenly becomes a talking sensation around the town and his spending the night in the haunted house becomes the occasion for the mayor to throw a public picnic and declare him a hero.

Alan Rafkin, a tv director who had been recruited from work on The Andy Griffith Show, seems uninterested in the haunted house aspect – at least as anything other than a hook to hang Knotts’ exploits on. Far more time is given over to scenes at the newspaper office or in the courtroom. The haunted house scenes consist of a single scene where Knotts goes to spend the night and sees the organ playing by itself, where a secret door opens and scissors appear impaled in the portrait. Even then, Rafkin does nothing to generate anything in the way of spooky or comic-spooky atmosphere and the scene abruptly cuts off before it even comes to an end.

There is a later scene where the court and jury return to the house and Knotts is bamboozled when none of the phenomena occur again. This has even less to do with haunted atmosphere and tapers off to reveal that everything that has gone on has a mundane explanation, which serves to centre the story more in the arena of a murder mystery than a haunted house film.