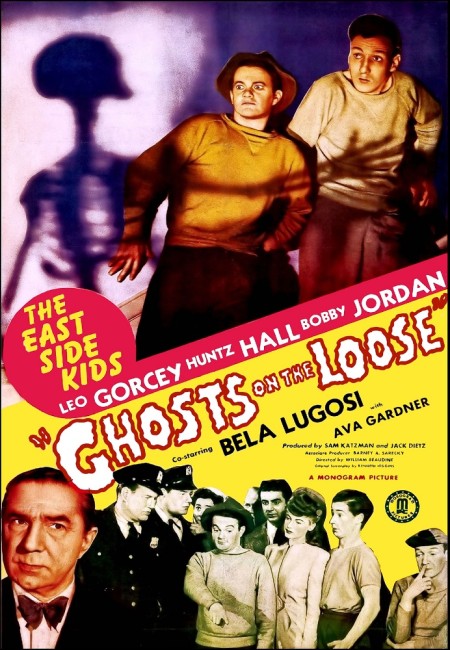 aka The East Side Kids Meet Bela Lugosi

The East Side Kids are helping prepare the wedding of Glimpy’s sister Betty and her fiance Jack. They decide to decorate the new house that Jack has brought by ‘borrowing’ furniture from the house next door. However, they then discover that the house may be haunted, while it also seems to house a Nazi propaganda press headed by the sinister Emil.

The East Side Kids, aka The Dead End Kids and The Bowery Boys, were an enduring comedy team throughout the 1940s and well into the 1950s. The complement of the gang changed considerably through their various incarnations, although the most famous of the famous of the faces were Huntz Hall and the gang’s leader Leo Gorcey. Although they became comic characters in the 1940s, the East Side Kids originally started out as an attempt to seriously portray juvenile delinquency in the slums in Sidney Kingsley’s play Dead End (1935). The play proved successful and was filmed in 1937, after which various of the actors who had played the juvenile delinquents both on stage and in the film went on to play similar jd’s in various dramas, most famously with James Cagney in Angels With Dirty Faces (1938) and Humphrey Bogart in Crime School (1938), and even in their own serials Junior G-Men (1940), Sea Raiders (1941) and Junior G-Men of the Air (1942). Sam Katzman then relaunched them under the name The East End Kids in 22 no-budgeters at Monogram, beginning with East Side Kids (1940), where their adventures were played strictly for lowbrow comedy. Leo Gorcey took control of the series in 1946 and rechristened them The Bowery Boys for a further 48 pictures at Allied Artists whose quality generally deteriorated even further than they had at Monogram.

A number of their efforts strayed over into fantasy – The East Side Kids did a number of haunted house/spook comedies with fairly interchangeable titles – Spooks Run Wild (1941) also featuring Bela Lugosi, Spook Busters (1946), Ghost Chasers (1951) and Spook Chasers (1957). Bela Lugosi, well on his way to the skids by this time, teamed up with The East Side Kids for two efforts at Monogram, Spooks Run Wild, which is regarded reasonably favourably, and Ghosts on the Loose here.

The most notable aspect of Ghosts on the Loose is its misleading title. There are no ghosts or haunted houses in the film, nor even the suggestion or belief that there are any. The closest the film comes is a running cameo from a next-door neighbour who rings up the police because she believes the noises she hears are ghosts. Being Monogram, Ghosts on the Loose is an amazingly cheap production – the camera is static throughout, the photography is poor. Moreover, the film is directed by legendary B-budget director William ‘One-Shot’ Beaudine, who helmed a number of the East Side Kids’ comedies.

Nevertheless, The East Side Kids’ have a engagingly energetic level of knockabout comedy. Leo Gorcey has a unique screen presence – a total motormouth with an Irish accent that you could chisel bricks with. Much of the comedy centres around his malapropisms – ‘morals on the wall’, ‘intimidating evidence’, ‘you should go to an optimist and get your eyes checked’ and so on. There is an amusing ending where Huntz Hall contracts German measles, which consist of swastikas all over his face.

Unfortunately, an engaging beginning pans into a pitiful middle. The hauntings – centred around faces appearing behind portraits, a picture of Napoleon that turns around, and some odd noises – are utterly banal. That is as scary as the film gets. The wartime propagandist message is dreadfully forced. Bela Lugosi, typecast again – one is certain the ghostly associations of the title have more to do with the simple fact of his casting than anything else – is given almost nothing to do.