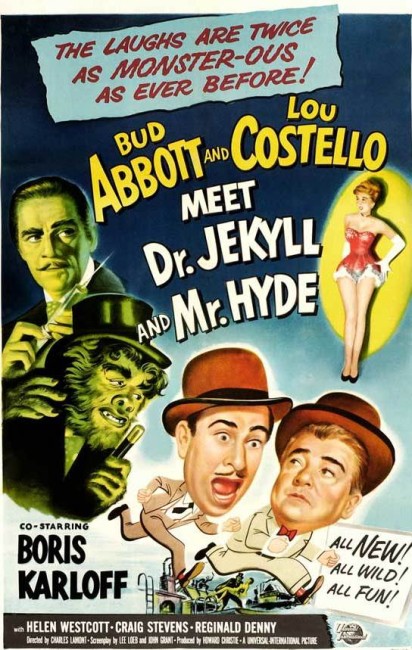 Turn of the century London. Slim and Tubby, two bumbling American detectives on loan to Scotland Yard, investigate the murder of a prominent physician. The trail leads to Dr Henry Jekyll who has perfected a potion capable of bringing out the bestial side of man and has been experimenting with it using himself as a subject. He has called his diabolical alter ego Mr Hyde. As Jekyll’s young niece Vicky becomes attracted to reporter Bruce Adams, jealousy brings the Hyde personality out in Jekyll and drives him to kill.

If one can stand Abbott and Costello’s lowbrow escapades – personally, I can’t – Abbott and Costello Meet Dr Jekyll and Mr Hyde is a fair entry. Some of the jokey slapstick skulkings-about, particularly the scenes at the wax museum, are even engaging once in awhile. However, the plot seems to consist of nothing more than comic running arounds, which get dragged out far longer than they should. There are some bad puns playing on the confusion between Jekyll/Hyde and Hyde Park. The film even manages to wind the suffragette cause into the storyline, although being an Abbott and Costello film it naturally has the women dancing.

Abbott and Costello Meet Dr Jekyll and Mr Hyde is interesting to see for the revisions it makes to Robert Louis Stevenson’s The Strange Case of Dr Jekyll and Mr Hyde (1886). The film adds a mildly indecent touch of incest with Jekyll’s reason for becoming Hyde partially being about defending his niece from sexual advances – a theme that uncannily prefigures Forbidden Planet (1956). The Jekyll/Hyde story was always a modern reworking of the werewolf myth, with the mad scientist’s laboratory standing in lieu of the full moon and silver bullets. This version takes Jekyll/Hyde far closer to his werewolf ancestor than most other versions in the prehensile design of the makeup and, in particular, the last scene that has the Hyde monster being passed on to a line of bobbies via a series of bites.