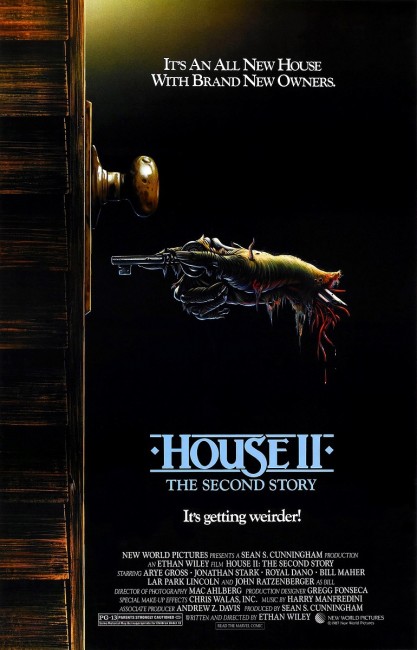 Jessie McLaughlin inherits a large old family mansion and moves in with several friends. Researching the family history, Jessie learns of his namesake great-great-grandfather who was a Western outlaw and about a crystal skull his grandfather found that promised eternal life to its possessor. They dig up Gramps, as they call him, who is still alive after nearly a hundred years thanks to the skull. When they return the skull to its rightful place on the mantle of the house, it opens different rooms up as doorways into the past. They find themselves fighting against barbarians, Aztecs and Gramps’ double-crossing partner, all wanting the skull.

The cheesily silly House (1986) proved an unexpected success for New World Pictures and producer Sean S. Cunningham. They returned with this sequel, which was one of three very loosely connected sequels to the original. In fact, House II: The Second Story is so loose it is not even related to the original except for the vague theme of a haunted house.

Instead, House II: The Second Story is a screwball haunted house comedy, maybe what one might imagine if a haunted house film was redone downmarket Indiana Jones-style. The results are in fact more entertaining than the first film was. There is a little too much running about with Gramps at the start, but the creatures – the fluidly animated baby dinosaurs and the zombie gunslinger who gets his head blown off by degrees and his skeletal horse – are excellent, certainly much better than the creations that appeared in the original.

The film is constantly laced with humour – at one point Gramps turns on a tv set and observes, “This Ronnie Reagan wouldn’t last five minutes in the West.” There is the appealing end image of the oddball family riding off into the sunset. Most amusing is the deadpan John Ratzenberger, replacing his Cheers (1982-93) drinking buddy George Wendt from the first film, as an electrician who doubles as an adventurer whenever the situation requires.

Not many people like the film, although one who regards it as superior to the original is screenwriter Kevin Williamson who includes a joke about the superiority of the sequel to the original in Scream 2 (1997).

The lineage of the subsequent House films is slightly complicated. There is no House III in the USA, however the Sean S. Cunningham-produced The Horror Show (1989) about an executed killer returned from the dead was retitled House 3: You’re Better Off on Elm Street internationally. However, House IV (1991) was a further sequel, directly following on from the first film, and released under that title around the world