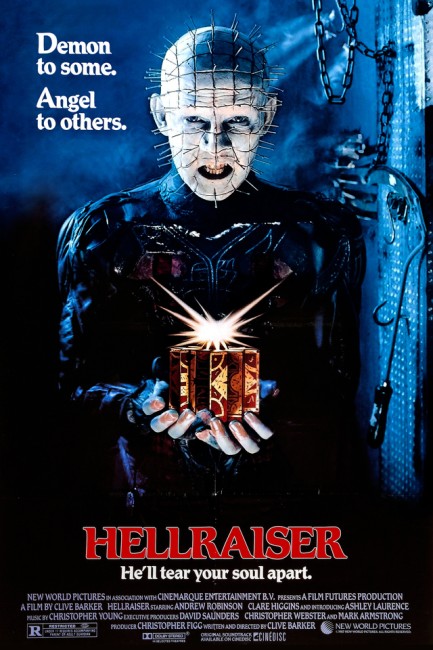 Larry Cotton and his wife Julia move into his family home in England. They find the house has recently been abandoned by Larry’s brother Frank, a petty criminal. However, Frank had opened up a puzzle box that has summoned The Cenobites, demons who offer ultimate pleasure through ultimate pain, and has been torn apart by them. When blood from a cut on Larry’s hand drips onto the floor in the attic, it manages to partially revive Frank’s remains underneath the floorboards. Gaining the aid of Julia, with whom he once had an affair unknown to Larry, Frank gets her to lure men to the house during the daytime on the promise of sex and kill them so that he can devour their bodies in order to reconstitute his skin.

“I have seen the future of horror and its name is Clive Barker,” Stephen King was quoted as saying by the trailer for Hellraiser. At the time, Clive Barker was a rising star, having in a very short time emerged first as a playwright – The History of the Devil (1981), Frankenstein in Love (1982), The Secret Life of Cartoons (1983); had produced one novel – The Damnation Game (1985); and written two screenplays that made for mediocre films – Underworld/Transmutations (1986) and Rawhead Rex (1987). However, it was Barker’s six-volume collection of short stories and novellas The Books of Blood (published between 1984 and 1985) that garnered him the most critical attention. And with the success of Hellraiser, Clive Barker became a cult name.

Hellraiser was an occasion when a production company had gambled a mere one million dollar budget on the then unproven director Barker – his only prior venture onto film had been two 16mm short films. The results far exceeded expectation with Hellraiser not only becoming a cult hit but also spawning seven sequels and a stack of spinoff merchandising. Although his star had faded by the end of the 1990s, Clive Barker did for a time seem to be the future of horror. Certainly, his brand of dark nihilistic no-holds-barred horror topped the crest of the mid-1980s/early 1990s wave of splatterpunk fiction.

Unlike other contemporary horror filmmakers/writers such as David Cronenberg or Stephen King, Clive Barker’s work is rooted in a Mediaeval Gothic universe. Like Cronenberg, flesh for Barker is a battleground. In Cronenberg’s work, the human body is like a warring ground between desire and technology with protagonists always on the cusp of transforming into a fusion of the two. On the other hand, science never enters the universe of Clive Barker – his is a universe of perverse beauty and ornate spleandour filled with demons, angels and deformities. Barker’s names and places evoke something Mediaeval and quasi-religious – book titles like Cabal, Sacrament, Galilee. In Hellraiser, for instance, the Cenobites are named after a 17th Century monastic order. In contrast to Cronenberg, flesh for Barker is not a laboratory of transformation but more akin to a torturer’s rack. Barker’s protagonists live in perpetual sense of Gothic ecstatic dread where their relationship to the monstrous is invariably a sadomasochistic one – one where they and their flesh play a role of submissiveness to The Other and the exquisitely dreadful tortures and mutilations it will inflict upon them.

Hellraiser is worth comparing to its contemporary A Nightmare on Elm Street (1984). Both Hellraiser and A Nightmare on Elm Street chart similar terrains, featuring young female teen protagonists (Heather Langenkamp and Ashley Laurence even look remarkably similar) and a middle-class suburban family environment that is invaded by monstrous beings from other realities (dreams in Elm Street; Hell here, which is perceived as an alternate dimension of sorts). Elm Street essentially features middle-class America under attack by a force of guilt literally emerging out of its repressed subconsciousness. For both Elm Street and Hellraiser, there are hidden secrets beneath the veneer of middle-class suburbia and nuclear family life.

The mid 80s was a period when fundamentalists and Republicans were using the myth of the middle-class family life and squeaky clean morality as a call for a return to decency and greater censorship. The era produced a number of films that subversively speared Family Values – Gremlins (1984) with its gleeful overturning of smalltown suburbia; Blue Velvet (1986), a film very similar to Hellraiser with its vision of a college kid leaving suburbia and discovering hidden sadomasochistic desires; and The Stepfather (1987) where a man’s desire to find the perfect family had him slaughtering all imperfect contenders.

Where Elm Street stays fairly much to black-and-white divisions and creates no sympathy for its boogey man, Hellraiser muddles the moral line in fascinating ways. Not far beneath a thinly drawn picture of family life – Barker never much concerns himself with drawing his human characters and all the life they have is given them by the actors – is a torrid cesspool of infidelity and unfulfilled desire. Barker taps into this cesspit of forbidden desire and links it to the Christian notion of sin. But then he ingeniously inverts it – rather than a pit of damnation, Hell is a baroque Gothic BDSM dungeon where protagonists seem to welcome as much as dread torture, dismemberment and damnation.

The images in Hellraiser have a perverse beauty. The Cenobites are genuinely original creations – they come in half-shadow, their pale bodies in black leather with sewn-up wounds, nails impaled through the head and bodily piercings. One cannot argue with the intensity of images like the shot in the opening moments that pans through a room of hanging chains and torture instruments to watch as one of the Cenobites pieces together the flayed sections of Frank’s face on the floor. There is also the daringly blasphemous moment of symbolism – which codifies Barker’s inversion of damnation and torture as perversely pleasurable – where Andrew Robinson gives an ecstatic sigh “Jesus wept” as he is torn apart by hooks.

In Hellraiser, Clive Barker is operating on a low budget but does miracles with it. The film is economically restricted to the single location of a dreary suburban home for the most part. The effects work from the Image Animation group is a remarkable credit to the limited budget – particularly stunning is the sequence where Frank’s body is reconstituted from slime. (Although, the Lovecraftian Engineer and the animation light show climax leave somewhat to be desired). Barker’s handling of actors is not the best – nor would improve with subsequent films – but he has a good cast on hand, young Ashley Laurence, Andrew Robinson who makes a fine mid-film transformation and especially the cold-blooded Clare Higgins. Before it became overworked by the sequels, Christopher Young creates a memorably sepulchral score.