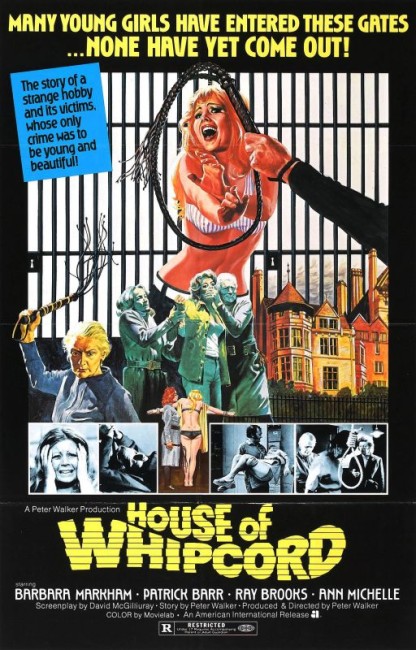 Anne-Marie Di Verney is a French model working in London. She receives a minor fine in court after a photographic shoot where she appeared topless in public. At a party, she meets and is asked out by the handsome Mark E. Desade. He asks her to come away with him to his mother’s place for the weekend. However, once they arrive there, Anne-Marie is placed in a cell. She is brought before the aging Justice Bailey and told that she is in a prison that has been privately set up to punish lax morality and deal with those who get off too lightly in the regular justice system. Anne-Marie is placed among other girls like herself who have all conducted minor offences. There they are treated with extreme cruelty, including being locked in solitary, whipped and even hung for infringing the laws that apply in the prison.

Pete Walker is a director who has been criminally ignored in the celebration of the English horror film. Walker is usually dismissed as an irredeemable sadist – yet this is often done by people who celebrate works of Sadean Anglo-horror like Circus of Horrors (1960) and Peeping Tom (1960). Pete Walker made such films as Die Screaming Marianne (1971), The Flesh and Blood Show (1972), Frightmare (1974), House of Mortal Sin/The Confessional (1976), Schizo (1976), The Comeback (1978) and the old dark house film House of the Long Shadows (1983). Certainly, in these films Walker’s focus is on sadism and cruelty, but what most detractors often fail to appreciate is that Walker’s attention to character and plot is far more intelligent and sophisticated compared to other films that came out around the same era such as the Italian giallo film or the 1980s slasher cycle.

House of Whipcord is Pete Walker’s single best film. A constant theme that runs throughout Walker’s films is the horror of conservative tradition and institutionalism. Walker’s villains are often people from an older, more morally repressed generation who display a cruel dislike for the sexual freedom and moral laxity of modern youth. These themes find their apotheosis in House of Whipcord. As the opening title card announces: “The film is dedicated to those who are disturbed by today’s lax moral codes and who eagerly await a return to corporal and capital punishment …” Now unless Pete Walker makes films with a sense of moral hypocrisy that is so gaping that everybody except he is able to see it, this is clearly a dedication we are not meant to take too seriously – it comes on the level of seriousness as a dominatrix who says “You’ve been very naughty boy and I’m going to have to punish you.” It is impossible to believe that Walker could mean such a dedication seriously; his sympathies throughout are far too much on the side of the people being tortured and punished.

Certainly, House of Whipcord plays like a sadomasochistic fantasy – you could hardly miss it with a character unsubtly named Mark E. Desade. There is the theme of the innocent from Swinging 60s London who is suddenly thrown into a harsh environment and given a sharp wake-up call from her blithely carefree lifestyle – in many ways, House of Whipcord is not too different from Wes Craven’s The Last House on the Left (1972), which similarly had two Flower Children being brutally jolted out of their Love Generation idyll at the hands of three sadists.

As the film progresses, Pete Walker unleashes an extraordinary cruelty. The depiction of Penny Irving’s progressive humiliation has a considerable nastiness as we see her being stripped, her hair being cut, she being placed in a cell filled with straw and rats, being whipped and witnessing another girl being hung. Especially good is Pete Walker regular Sheila Keith, who gives a standout performance, projecting a cold chill as she insists: “I’m going to make you ashamed of your body, Di Verney. I’ll see to it personally.”

Though House of Whipcord is on the side of Penny Irving and the other girls, one suspects that Pete Walker does sneakingly enjoy unleashing sadism – even the seduction of Penny Irving by Robert Tayman in the early scenes contains a fascinatingly cruel scene where he gets her to close her eyes while he teases her arm with an ice cube making her think it is a sharp knife.

House of Whipcord is a well worthwhile film. Pete Walker evinces a grim atmosphere inside the prison. His grasp of character has never been better – especially good is the blind judge Patrick Barr who is losing his faculties and has to be prodded to recite the incredibly harsh indictments by an impatient Barbara Wakeham. Sheila Keith, as mentioned, gives an excellent performance.

The only minor fault of the film is a desire to play some of it as a thriller, where Walker keeps crosscutting back to Penny Irving’s roommate Ann Michelle and her boyfriend Ray Brooks in a desire to develop a thriller subplot of sorts. These scenes are not particularly well developed, although some of the cruel ironies are made to effectively play off one another later in the piece. In the cutaways to these roommate scenes, Walker also aims for a sense of black humour – lines like “You’re a sadist,” “It’s like a prison here” – that fail to come off effectively.