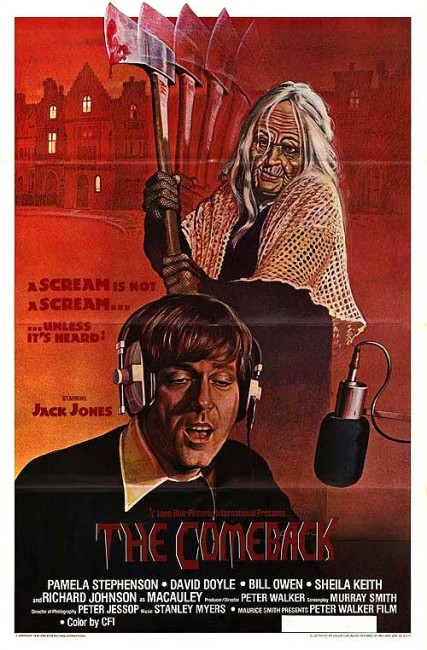 aka The Day the Screaming Stopped

Pop star Nick Cooper attempts to make a comeback after a six-year absence and a divorce but is plagued by doubts. He retreats to a country manor to sort himself out. Once there, he is tormented by eerie hauntings, although nobody else can find any evidence of what he sees. At the same time, someone starts killing off those around him.

The films of Britain’s Pete Walker (see below for titles) are often quickly passed over and dismissed as being exploitative Sadean thrillers. However, Pete Walker is a better director than that and should not be so easily dismissed.

The Comeback is a more than reasonable effort. Walker deals up some strong violence but The Comeback also balances this with a fair plot. Just compare The Comeback to the flood of slasher films that popped up following Halloween (1978) not long after this, most of which were designed solely as Sadean killing machines with plot only intended to connect sequences involving the slaughtering of teens together. In comparison, the films of Pete Walker suddenly appear in a much more favourable light.

The pace in The Comeback is on the slow side but Walker does an interesting job in managing to turn the supporting cast into threateningly perverse characters – like Peter Turner’s crass advances on Pamela Stephenson, while David Doyle is revealed as a closet cross-dresser. And then there is Walker regular Sheila Keith who gives a marvellously cold performance, managing to imbue even a line like “Perhaps I can spread the butter for you?” with something sinister. Jack Jones, a real life pop singer during he 1960s, gives a fair and likeable performance.

As with much of Pete Walker’s work, the end revelation of what is going on resides in conservative, institutionalised horrors, which, in Walker’s films, hold a psychopathic dislike of the freedom and perceived moral laxity of the youth generation. There is also an interesting end that suggests it might all have been in Jack Jones’s imagination anyway.