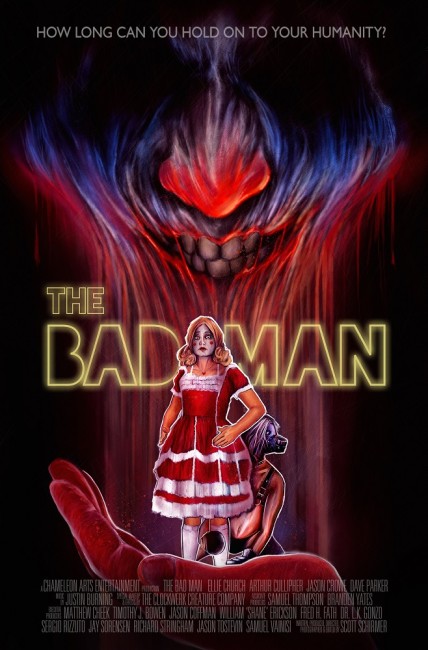 Mary inherits her grandmother’s house in her will and moves in with her boyfriend PJ. Her grandmother used to operate the house as a Bed and Breakfast. One of the grandmother’s customers Lawrence turns up at the door, saying he has booked a room. Mary says they are not ready to re-open yet but allows Lawrence in for the night. Over dinner, Lawrence tells them he is a clown. Mary wakes in the morning to find Lawrence in clown costume dragging PJ’s unconscious body down to the cellar. Lawrence and his associate Charlie make the two of them prisoners where PJ is outfitted and treated as a dog, while Mary is dressed as a doll. Together they are forced to undergo a series of sadistic degradations as Lawrence prepares to sell them in a slave auction held by a fetishist underground.

The Bad Man was the sixth film for Scott Schirmer, a director who has made an increasingly interesting body of work that has gotten little recognition. Following the non-genre Off the Beaten Path (2005), all of Schirmer’s work has been in horror with the likes of House of Hope (2010), Found (2012), Harvest Lake (2016) and Plank Face (2016). For other directors, Schirmer has also produced Headless (2015), The Legend of Wasco (2015) and Space Babes from Outer Space (2017).

The killer clown has taken off almost as its own mini-genre in recent years, particularly with the popularity of the remake of It (2017) – Scott Schirmer had even produced one of these killer clown films with The Legend of Wasco. (A listing of others can be found under Killer Clown Films). The Bad Man was made not long after It came out. That said, this is not entirely a killer clown film in the ways these other killer clown films are, which feature either psychopathic or supernatural clowns tormenting people. Instead, Scott Schirmer turns the clown (Arthur Cullipher) into the complex character of a sadist who evolves a relationship with his subjects. Cullipher even has a fascinating scene where he deconstructs the trope of the killer clown, pointing out that with the closure of circuses, all that a new generation of children have known the clown as being is a horror icon.

All of that said, The Bad Man is less a killer clown film than it is Home Invasion film along the lines of The Strangers (2008) where a regular couple have their home invaded by masked (or made up) strangers who proceed to torture and play sadistic games with them. The Bad Man is essentially The Strangers but with a heavy focus on BDSM elements where the imprisoned couple are turned into sexual playthings and humiliated – Jason Crowe, for instance, is treated like a dog, made to wear no more than leather underwear and kneepads, along with gloves over his hands to create paws, while being given a doggie bowl out of which to eat.

While most other killer clown films, It included, go for standard jumphocks, Scott Schirmer proceeds to get memorably twisted. In very short time, The Bad Man enters into an extremely disturbed headspace. I do have to qualify this in that I am at the disadvantage of watching what is clearly a cut version of the film where reportedly some 21 minutes have been removed – there needs to be a campaign to release an uncut version of the film.

Even in the cut version, there are still some disturbing visions like where we see Jason Crowe being forced to perform oral sex on Dave Parker and then placed face down on the bed where it is implied he is being anally raped. This is followed by Crowe being given an injection to increase his erection and ordered to be a good dog and get himself off against Arthur Cullipher’s leg. One of the more disturbing aspects is seeing that Crowe seems to enjoy his humiliation and being treated as a dog and that he has bonded with Parker – even seems bereft of his master when Ellie Church frees him. There is also a jolt scene where Ellie Church finds her bottom half has been wrapped like a present and she is told to tear it open only to find that boyfriend Jason Crowe’s severed eyeball has been place inside her vagina. With scenes like these, it makes you wonder how much more extreme the material that was cut out ended up being.