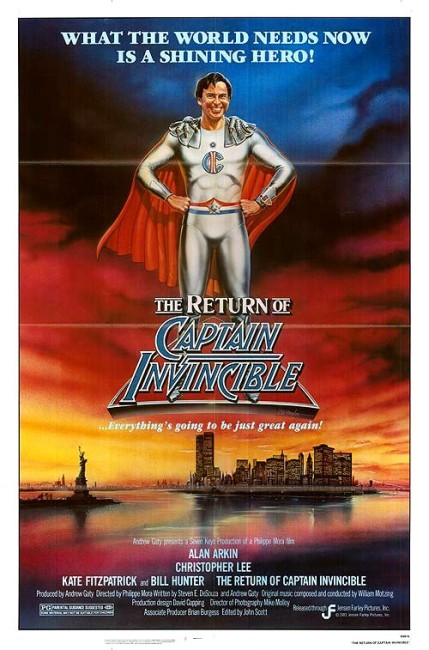 aka Legend in Leotards

When the evil master criminal Mr Midnight steals the Hypno-Ray, The President realises that they need a superhero to save the day. However, the only superhero left is Captain Invincible, who was forced to retire during the 1950s after his integrity was brought into doubt during the McCarthy witch hunts and is now an alcoholic living on the streets in Sydney, Australia. Mr Midnight begins an ingenious scheme of selling worthless property to people and using the Hypno-Ray to convince them that the land they are buying is prime real estate, which he then intends to fire nuclear missiles on. Meanwhile, the FBI desperately try to cure Captain Invincible of his alcoholism and regain confidence in his powers.

The Return of Captain Invincible came out during a period of renewed on-screen interest in comic-book superheroes that began with the lavish big-budget adaptation of Superman (1978). This era also produced a number of superhero spoofs, including the likes of Hero at Large (1980) and tv’s The Greatest American Hero (1980-2).

One of the best and most underrated of these was The Return of Captain Invincible. It is a film that has clearly been written by comic-books fans and contains both a clever and sophisticated parody as well as a wistful nostalgia for a lost era of stalwart Silver Age comic-book superheroism. It was the most witty and intelligent of the superhero parodies up, at least until the arrival of tv’s The Tick [the 1994-6 animated series version] and The Incredibles (2004). Much of the basic premise of The Return of Captain Invincible was later uncreditedly taken by the film Hancock (2008).

The film obtains a good deal of satiric mileage simply by rooting the comic-book superheroics in the real world. The opening mock newsreel and its pointed parody of the valiant moral heroism of 1950s comic-books, not to mention the contrast of it to the McCarthy witch-hunts, is a superb touch.

The film was directed by Philippe Mora, whose next two films, the rock bottom likes of The Howling II (1985) and The Marsupials: The Howling III (1987), make it difficult to believe is the same director. Here Mora demonstrates a surprisingly instinctive touch for the bizarre exigencies of parody, manic slapstick that the script demands – even leaps off into Rocky Horror-styled kinkiness. The most bizarre scene in a fight between Alan Arkin and a roomful of killer vacuum cleaners.

Alan Arkin seems somewhat miscast as Captain Invincible though, he lacking the necessary quality of heroic self-parody in his serious-intent performance, although the scene where his computer brain malfunctions ending with him running around the room hitting his head with books while babbling data at high speed, stands out memorably.