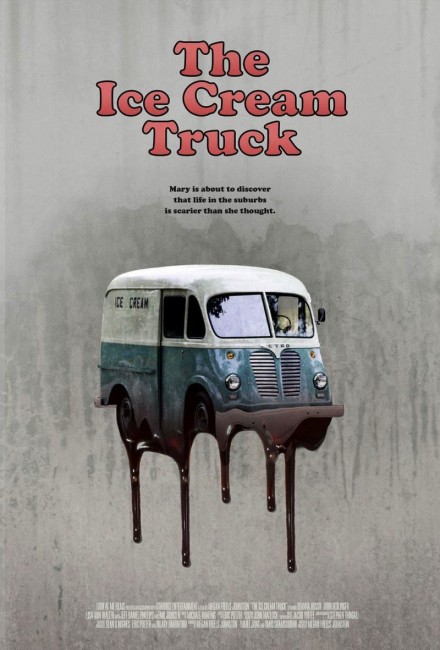 Mary has moved into a new home in the old neighbourhood where she grew up. She is waiting in the empty house for her husband and children to arrive in a few days’ time. She is befriended by the neighbours and invited by Christina to her son Max’s graduation party that evening. Mary attends and meets Max outside where she shares a joint with him. At the same time, an ice cream truck is prowling the neighbourhood and its driver killing people. The next day, Mary asks Max to come over and do some yard work. He returns with some more marijuana and propositions her. As Mary struggles with giving into temptation, The Ice Cream Man begins targeting her.

The Ice Cream Truck was the second directing-writing outing for Megan Freels Johnston. Then known as just Megan Freels, she had previously made the horror film Rebound (2014). She is next set to make Hunting Season (2020).

I ended up quite liking The Ice Cream Truck – and for reasons that have nothing to do with it being a horror film. The script has a psychopathic ice cream truck driver stalking a suburban neighbourhood – oddly enough nobody ever seems to notice a reasonable number of people disappearing in a short space of time or witness them being killed in broad daylight (sometimes right in the middle of the street). Freels Johnston does nothing with the psycho elements – there are one or two slaughters, a few scenes of Emil Johnsen stalking people but nothing that gets the pulse moving. The film does come with a score that homages the synth scores for 1980s slasher films.

On the other hand, The Ice Cream Truck is undeniably likeable. Freels Johnstone has a reasonable lead in Deanna Russo and does an appealing job of portraying her reactions to the off-centred normality of the characters she encounters in the neighbourhood. The best part of the film are the scenes where the married Deanna Russo starts to fall under the charms of neighbouring teenager John Redlinger after he propositions her and is tempted into having a fling with him before her husband and children arrive in two days’ time.

The end the film reaches [PLOT SPOILERS] is an offsetting restoration of the status quo, almost an All a Dreaming Ending where the husband arrives and Deanna Russo happily reunites with him, while John Redlinger walks past and waves hi, accompanied by the girlfriend that we saw killed earlier as the film fades out on the threatening presence of the delivery man (Jeff Daniel Phillips) standing on the street staring.