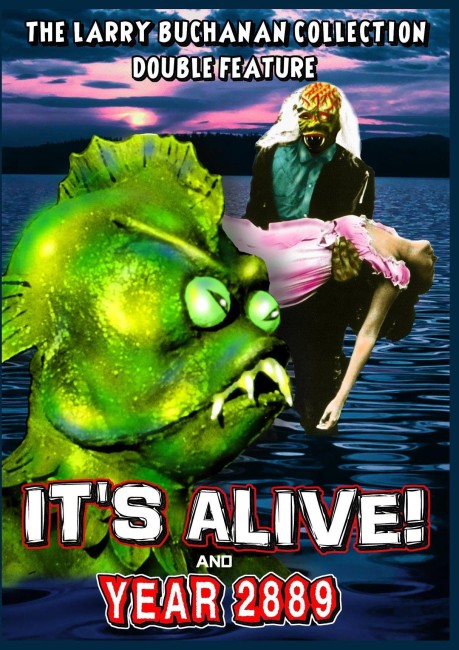 Driving through the Ozarks, Norman and Leslie Stearns take a wrong turning. Looking for gas, they come to the farm of Grevy. Grevy offers to show them his collection of animals but instead takes them down into a series of caverns and locks them up behind bars. There they learn he is planning to sacrifice them to the prehistoric masosaurus that he keeps in the caves.

There is certainly much to justify Buchanan’s reputation when it comes to It’s Alive!. The worst thing in the film is the masosaurus creature, which is seemingly made out of towelling cloth and the good old Buchanan standby of ping-pong eyeballs. Amidst a bad cast, former Disney teen star Tommy Kirk gives a performance that is fascinatingly awful to watch. He plays with these cringing facial contortions that are in no way relevant to the emotion required – after seeing the monster for the first time his reaction is to spend about five minutes shaking his head while crying in a nasal whine, “It’s unbelievable.”

Almost despite itself, It’s Alive! has a strangely obsessive atmosphere to it. Buchanan’s opening Twilight Zone (1959-63)-esque narration, as his camera drifts through the familiar yet offsettingly strange Ozark locations, filled with dark woods and peculiar dinosaur shapes in the fields, achieves something almost poetic in its peculiar banality. There is a captivating voiceover on the soundtrack: “For Leslie Stearns and her husband Norman, it was another day in a cross-country tour. But as they entered the Ozark Plateau, an ominous feeling invaded the privacy of the car, a feeling that intensified with each turn of the winding highway. There were reassurances from time to time – usually in the form of a familiar landmark. But soon these were behind them and it began to rain. There is a legend in these hills that when it rains and sunshines at the same time the Devil is kissing his wife. And speaking of the Devil … Look Norman! An exclamation at something out of time, out of place. Then a simple request to explore another in the strange oddities that dot the roadside of a thousand highways. Oddities that beckon the traveller to stop and see. But terror knows no time or place and jeopardy can hide behind rain or shine. And if Norman Stearns knew what danger lay, screened by an Ozark forest, he would never have left the highway.”

The most fascinating sequence is the long, narrated flashback where Annabelle Macadams tells how she became Corveth Ousterhouse’s prisoner. Here Bucahanan achieves a genuinely Sadian weirdness in the scenes of the sweaty Ousterhouse serving her up dead mice and blowing whistles as she sleeps. The sequence ends on a slow-motion chase through the forest before she is recaptured and the haunting final voiceover: “With each lash of his belt, I felt my will to live slipping away and myself becoming one of Grevy’s animals.” The peculiar atmosphere the film achieves at these times makes this the best amid Larry Buchanan’s otherwise eminently forgettable output.