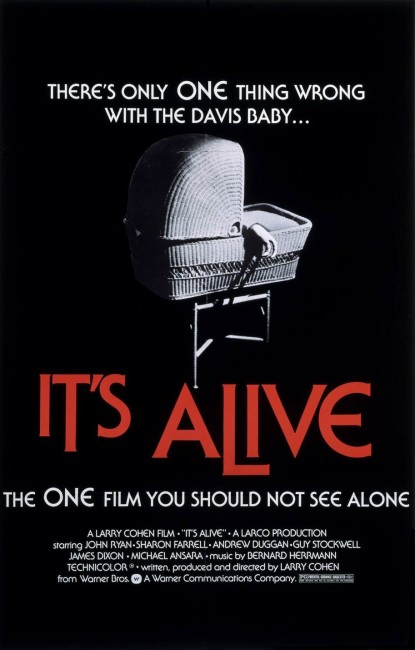 Lenore Davis gives birth to a hideous clawed and fanged mutant baby. It immediately slaughters the delivery team and then flees into the city. As it conducts a spate of killings in its search for food and shelter, the father Frank is suspended from his job. He joins the police manhunt, determined to exterminate the baby. Through the course of this, Frank instead becomes the baby’s saviour.

A small cult exists around firmly independent writer/director/producer Larry Cohen. It all began with the low budget success of It’s Alive. Cohen first emerged during the 1960s as a prolific writer of scripts for various tv shows including Way Out (1961), The Fugitive (1963-7) and The Invaders (1967-8) and then moved into film with screenplays for the likes of Return of the Seven (1966) and Daddy’s Gone A-Hunting (1969). Cohen then began to direct his own work beginning with the low-budget likes of the very strange Bone (1972) and two above average and highly regarded Blaxploitation films Black Caesar (1973) and Hell Up in Harlem (1973), before venturing into genre territory with It’s Alive.

Though It’s Alive was made on one of Larry Cohen’s usual low budgets, it was a considerable international hit. It was then with genre films such as God Told Me To/Demon (1976), Q – The Winged Serpent (1982), The Stuff (1985), the It’s Alive sequels, as well as non-genre thrillers such as Special Effects (1984) and Blind Alley/Perfect Strangers (1984), that Larry Cohen established his reputation as a director of witty, conceptually ingenious low-budget films. It was with these that Cohen gained a considerable critical cult, most notedly for his monster movies, which come with quirky twists and often amazing soliloquies that offer surprising sympathy for the monster.

It’s Alive exhibits an inevitable amateurishness of low-budget filmmaking, particularly when it comes to the weak colour photography. However, Larry Cohen rides through all shortcomings with a remarkable assurance. The initial delivery room scene is handled rather well, beginning with a shot down a long corridor where the calm is abruptly disrupted as John P. Ryan sees a body staggering out of the operating room and falling to the floor. The bloodied operating room scene seems tame today but background comments such as “the umbilical cord’s been severed, but not surgically – it’s been chewed off,” add an unnerving note. The later attack on the milkman balances gore, wit and style – with the entertainingly ludicrous sight of the milkman’s legs twitching in mid-air from the van compartment door and the image of blood and spilt milk combining in a single flow into the gutter.

Larry Cohen adds his characteristic wry wit throughout – the scenes in the waiting room downplay the usual anxieties with some highly amusing chatter from the other expectant fathers, including the rat exterminator offering discount rates to the other parents. There is even a remarkable little speech about the popular confusion of Frankenstein with his creation, while of course the title of the film is taken from the line that Colin Clive first says when he brings Boris Karloff’s monster to life in Frankenstein (1931).

It’s Alive is all the more effective not so much for the scares, which would make it merely a better jump in on the Rosemary’s Baby (1968) and The Exorcist (1973)-inspired malignant pregnancies and diabolical children cycle, but for Larry Cohen’s perverse inversion of paternal/infant imagery. It is subtle and understated but the baby’s trail of killings, for instance, seem to be related to a sense of its enforced self-sufficiency – having to find its own milk, a nursery, a home – against which is balanced John P. Ryan’s need to prove to himself that it is not human and by extension not his.

Most fascinating is the ending where John P. Ryan finds the pathetically mewling baby in the sewers and fathering instinct takes over, suddenly turning him from the baby’s exterminator to its saviour. The scenes with it bawling in the torchlight as he approaches it to tell it to stop crying and the subsequent chase lit in the red flash of sirens is something that Larry Cohen pulls off with great style.

The bucolic happiness of John P. Ryan’s performance, blankly grinning at everything, seems initially off-putting. Sharon Farrell is far more believable in the opening moments. However, what happens is that John P. Ryan gets better – in fact, one could hardly think of a more credible father trying to come to terms with a monstrosity. A pre-hair transplant Michael Ansara makes an appearance that lasts for all of about 30 seconds, for which he gets listing on the film’s opening credits and poster. Alfred Hitchcock’s usual composer Bernard Herrmann creates the fine soundtrack (his last work before he died in 1976), a grinding brass whine overlaid with swimming noir strings.