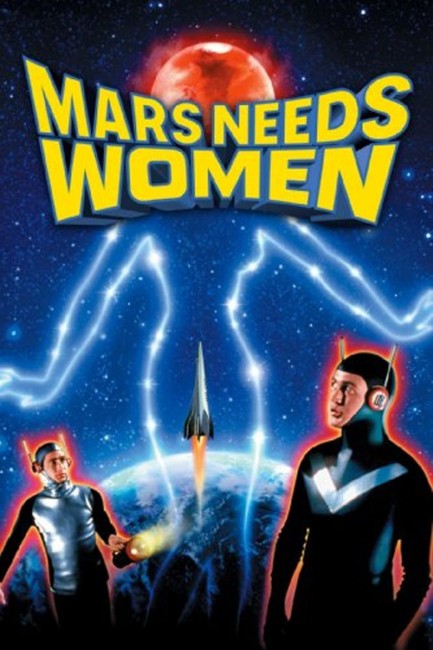 Earth military pick up a message from outer space saying “Mars needs women”. A Martian, Dop, appears, announcing that a deficiency in Martian genetics has resulted in a one hundred percent male population and that they want five women to take back for breeding purposes. When the military refuse to accommodate, the five Martians land in secret and set out to each abduct one Earth woman.

Larry Buchanan is one of a handful of regular genre directors who rank up along with the likes of William Beaudine, Donald Farmer, Herschell Gordon Lewis, Richard E. Cunha, David DeCouteau and, the undisputed king of them all, Edward D. Wood Jr who have made a singular body of thoroughly bad films. (See below for Larry Buchanan’s other genre films).

Needless to say, Mars Needs Women has all the hallmarks of a Larry Buchanan film. The budget is extremely low and the effects cheap – Buchanan should get some award for entrepreneurial effort for a scene that attempts to convince us of a flying saucer attack by cutting back and forth between stock footage of Air Force planes conducting manoeuvres and between watching Air Force personnel listening to the off-screen attack being described on a speaker. There is no particular plot to the film – all it seems to consist of is cutting between various scenes of the Martians following Earth women about. As with most Buchanan films of this era, it was shot in 16mm and blown up to 35mm.

There is a certain amusement to be found in some of the Martian takes on Earth culture. Tommy Kirk – a former Disney teen star who became a Larry Buchanan regular – plays with a bizarre deadpan intensity. Some of the most unintentionally funny scenes in the film feature Tommy Kirk – like his intense and over-the-top attempts to provide the narration when the soundtrack at a planetarium breaks down or his hilarious cliche declaration of love for Yvonne Craig and abandonment of the mission at the end.

Biggest howler – Tommy Kirk to scientist Yvonne Craig: “He must be proud of you winning the Pulitzer Prize,” where Buchanan seems unaware that the Pulitzer Prize is awarded for excellence in journalism not scientific discovery.