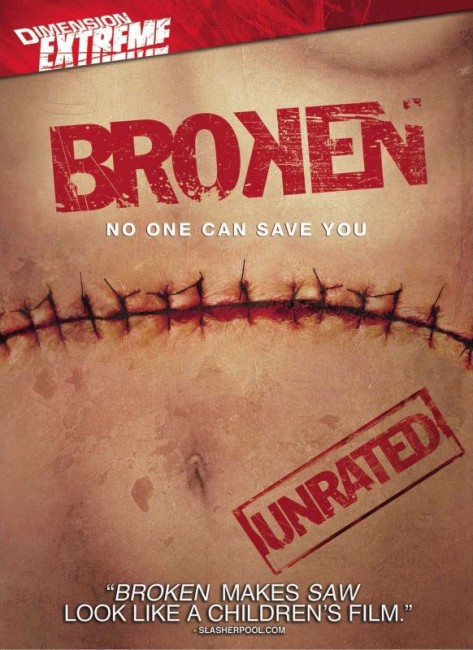 Hope comes around to find that she has been abducted by a man who lives in the forest. The man places a noose around her neck, leaving her precariously balanced from a tree where her only choice to get free and not hang herself is to tear open her stomach and cut the noose with a razor blade that he has sewn inside her stomach. After she succeeds in freeing herself, the man chains her up under a tree, ordering her to scrub pots. He gives her a patch of garden to tend, threatening to kill her if any of the plants die. She makes every effort to get the key to her manacles. However, when she does manage to escape, he catches her and breaks her leg. The man brings another abducted girl to join them. Through this ordeal, Hope’s only desire is to know if her young daughter Jennifer is still alive, even though the man tells her that she now no longer has any family except him.

Broken is a British-made entry in the modern fad for torture films made following the success of films like Saw (2004) and Hostel (2005). Broken was the premiere production from Brand Mason, a production company formed by expatriate South African actress (and this film’s star) Nadja/Nadya Brand (she is billed by both spellings on the credits of Broken) and her British husband, the film’s co-director Adam Mason. Mason and Brand had previously made Dust (2000) and The 13th Sign (2000) and subsequently went onto make The Devil’s Chair (2006) together. Following their divorce in 2006, Mason went on to direct Blood River (2009), Luster (2010), Pig (2010), Hangman (2015), I’m Just F*cking With You (2019) and Songbird (2020), all of which are horror films, as well as the script for the Joe Johnston-directed thriller Not Safe for Work (2014). Simon Boyes has not directed any other films but has co-written all of Adam Mason’s other films.

Broken is a strong and immensely assured showing from Adam Mason and his co-director Simon Boyes (all the more so given that the film only had a budget of around £5000). There is a gripping opening with a woman balanced on a piece of wood, hanging from a tree by a noose around her neck, where she then has to tear her stomach open and retrieve the razor that has been sewn there in order to cut herself free. There is something gut-churningly gruesome to watching her delving into her stomach with her own hand and then crawling on the ground with her intestines hanging out. The scene ends with her coming up to her assailant (whose face is never seen) and reaching up a bloodied hand to place the barrel of his shotgun against her face and pull the trigger.

The film then bewilderingly cuts to Nadja Brand out on a date with a guy and then coming home to her daughter. (The two women in both these scenes are so alike it is hard to tell if this is not the same woman we have just seen cutting herself down from the tree). The film then abruptly cuts away to show Nadja up the tree in a repeat of the situation we just saw with the other woman, where watching her cutting herself open and her intestines falling out as she tries to stuff them back in is just as gruesome a second time over.

This initial set-up starts out seeming like a copy of Saw – woman wakes up in a strange place, has to tear herself apart in order to escape from a fiendishly devised trap. After the point that we see The Man’s face, the trap/puzzle aspect drops away and is forgotten. We never find out why he hangs women in a tree like that – it feels like such a scene was thrown in because Broken wanted to create an audience hook that was imitative of one of Jigsaw’s traps in Saw. Thereafter the film becomes an imprisonment story. If there is a film you might compare Broken to it is Wolf Creek (2005), which likewise had people imprisoned by a strange and sinister man who lived in the wild. You could travel wider to look at other imprisonment films like The Collector (1965) and Paranoid (2000).

The scenes between the imprisoned Nadja Brand and Eric Colvin have a considerable tension. (One of the most concerning things about Broken is that the film never deigns to give us any explanation of why the man is abducting women). He chains her up in the woods and then incongruously gives her a gardening book and points to a small patch beside her: “This is your garden now … If any of it dies, you’ll answer for it.” There are some grim and horrible scenes with he breaking her leg after she briefly escapes and then dragging her back to the camp with the broken bone protruding through her skin and sitting before the fire to sew her wound back up.

The nastiest of all is the introduction of the second girl (Abbey Stirling) who will not stop screaming until the man abruptly goes over, whips his knife out and slices out her tongue. You could compare this to the similar scene in Blood Feast (1963), although the effect here is truly grim rather than something not meant to be taken too seriously. Mason and Simon Boyes cannot resist throwing in a sardonically nasty final shot of the scene where we see the severed tongue frying after being thrown into the fire.

There is a long and gruesome scene at the end where Nadja Brand finally does escape and bashes Eric Colvin’s head in with an iron bar where, with gut-churning impact, we watch the man’s head being caved in and his teeth and brains splattered everywhere. The film’s coda is a final bleak black joke that gives the heroine no quarter at all.

Broken is claimedly based on a true story, although the film’s promotion and website fail to provide any details about the incident. Most amusing is an interview with Adam Mason at Horror Asylum where he claims that Broken was fuelled by his anger and frustration at trying to get finance for a film in England.