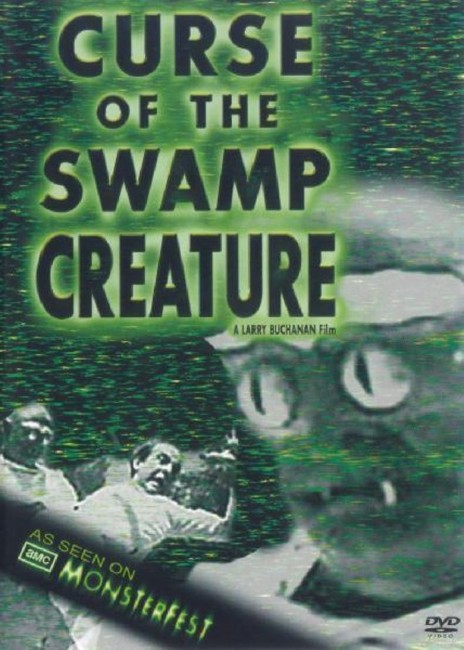 At the backwoods Fly N Fish hotel, Brenda Simmons and several of the hotel staff are determined to get the secrets of guest Driscoll West who has come seeking oil in the area. However, West returns while Ritchie is rifling through his luggage, a scuffle ensues and West is killed. With West’s geologist Barry Rogers flying in in order to lead the way into the swamps tomorrow, they decide the only recourse is for Brenda to pretend to be West’s wife. The ruse is successful and the group set forth on the expedition into deep swamp territory. They arrive at the laboratory home of Dr Simon Trent who has been engaged in a series of experiments to revert humans to their crocodile ancestors. He has been choosing his experimental subjects among the voodoo-worshipping African-American locals of the area but this has caused the natives to become restless.

Curse of the Swamp Creature was another of these AIP remakes. In this case it is based on the film Voodoo Woman (1957), an entertainingly cheap potboiler that featured Marla English as a gold-digging strumpet heading into native jungle in search of treasure and coming across mad scientist Tom Conway who is trying to use voodoo to create a female monster. Larry Buchanan embellishes the original far more so than he did with any of his other AIP remakes. The nature of the monster the scientist is experimenting on is changed from a mind-controlled voodoo monster to some nonsense about creating human-crocodile hybrids and returning people to their evolutionary beginnings, while the purpose of the expedition had been changed from a treasure hunt to a search for oil.

Voodoo Woman was set in an unspecified jungle territory represented by cheap backlot photography and stock footage. By contrast, Buchanan actually goes on location into the bayous of backwaters Texas to shoot. The difference between the two is that Curse of the Swamp Creature is able to spend more of its time on the adventure aspect of the film – even if this never consists of much more than the cast passing through the swamps by boat and setting up camp. The oddity is that, despite being located on US soil, Curse of the Swamp Creature still retains the notion of restless natives beating the drums and practicing voodoo rituals in the jungle, which does seem just a little eyebrow-raisingly odd when you try to think of it applying to African-Americans in the backwater bayous of Texas.

As usual, Larry Buchanan does not make a very good film. None of it is terribly interesting and things are further killed by what is possible one of the dreariest film scores ever recorded. (Given that there is no music credit, you suspect that this is a library score that was rehashed from elsewhere). On the plus side, the film picks up once it arrives at the mad scientist’s house where Jeff Alexander plays to the gallery with entertainingly theatrical effect while delivering most of the role behind a pair of sunglasses.

The only recognisable name present is B movie regular and former Mr Shirley Temple John Agar who, for all his headline status, never gets up to much. One of the standouts points of Voodoo Woman was the performance of Marla English who went to town on the cruelly murderous strumpet routine – it was she who became the title creature – but Shirley McLine’s performance in the equivalent role here disappears into the utterly anonymous.

The big cheat of the film is the actual provision of the swamp creature. Although we get a few glimpses of a claw protruding from a mist-filled tank in the laboratory scenes, the full creature only appears in the last five minutes of the film. It eventually turns out to be the good old Larry Buchanan standby of the monster with ping-pong ball eyeballs. It is almost a completely useless monster in that all it does during its time on screen is stagger out the doorway of the house, throw mad scientist Jeff Alexander into the river to be devoured by crocodiles before jumping in after him itself.