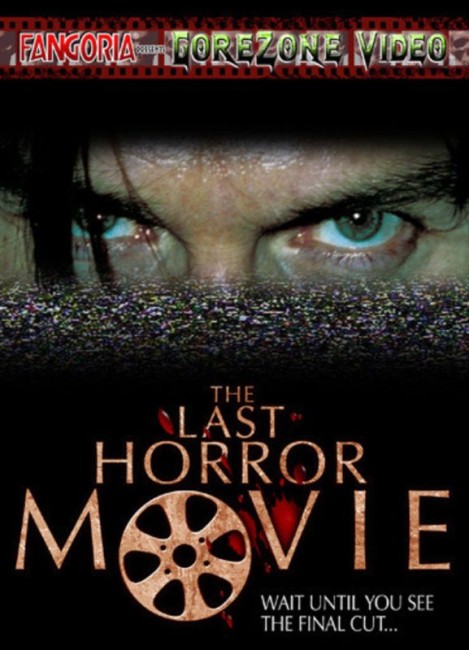 Wedding videographer Max takes his assistant with him as he makes a film detailing his activities as a serial killer. Max cheerfully demonstrates his killing techniques, while remonstrating those watching for their complicity.

The Last Horror Movie was the third film from British director Julian Richards. Before this Richards had made the horror film Darklands (1996) and the thriller Silent Cry (2002) and he would subsequently go on to make Shiver (2012), Daddy’s Girl (2018) and Reborn (2018). I must admit to initially overlooking The Last Horror Movie. In my mind, I had the title confused with the Caroline Munro slasher film The Last Horror Film (1982) and thought they were one and the same.

The Last Horror Movie is a Found Footage film, although it doesn’t easily slot into the hallmarks of what we identify as the Found Footage film today. It is cleanly shot and edited, lacks a lot of the ragged shooting style of people running around holding cameras or jerky broken frames. (I suppose this can be justified by saying that we are meant to be watching is something shot by a professional wedding photographer). The Last Horror Movie was made not long after The Blair Witch Project (1999) and you can see that Julian Richards is taking his lead from much of that film; on the other hand, it was still several years before Paranormal Activity (2007) went stratospheric and the look of the Found Footage film was essentially established.

Julian Richards’ real source of inspiration was almost certainly the Belgian black comedy Man Bites Dog (1992), which uses the same proto-Found Footage style and also features a serial killer as he walks about with a film crew cheerfully describing his methods and every so often diverting off to demonstrate them. You could maybe also stretch things to draw a connection to American Psycho (2000) that had a cocky Christian Bale addressing the audience before turning to kill people.

The main difference is that both Man Bites Dog and American Psycho played themselves as a black comedies but The Last Horror Movie does not. Certainly, there is an undeniable funniness to scenes like where Kevin Howarth stabs a woman in her kitchen and tells her about the beauty of what is occurring only for her to die in mid-speech and ruin his point. Nor would I say that the deaths here are that well staged. There seems a lack of violence and viscerality to them that leaves you feeling the film could have gone for the throat far more than it did.

I never much connected with Kevin Howarth’s central character. He seems less like a serial killer than a charismatic street hustler trying to con us into something. There is more a devilish charm in his performance than you ever get the sense he is following his darkest urges to kill. On the other hand, where this starts to come together quite well is in the scenes where he begins remonstrating the viewer. In one scene, he taunts the audience asking whether they would sell their tv to save a child in China – what then if he were about to kill a child, would you give up your tv to save their life? If so what makes the child in China of less value than the one in front of us? In another scene he kills a couple and directs his assistant to turn the camera away as he does the act and then afterwards taunts us over the fact that we did want to see what happened and are complicit. “Why are you still watching?” he taunts. The only other psycho film, also Found Footage, that dug in and exposed our complicity in watching was Shane Ryan’s remarkable Amateur Porn Star Killer (2007). It is in these scenes that The Last Horror Movie starts to work.