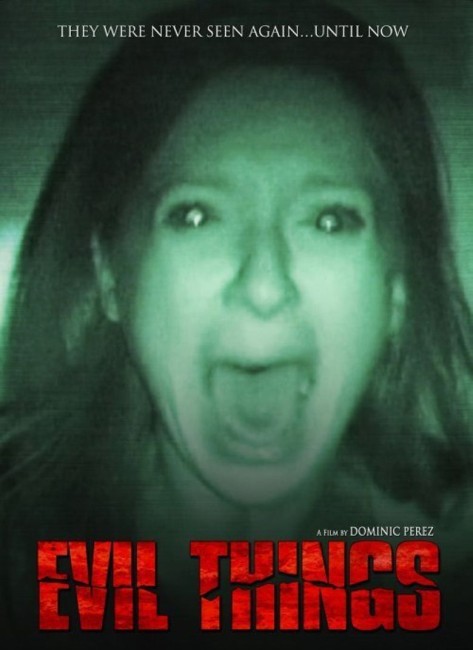 Five friends went missing in 2009. No evidence was found until a videotape was delivered to police. It shows how the group drove upstate from New York City to hold a twenty-first birthday party for Miriam in the home that her aunt had loaned them. Leo filmed everything with his new video camera. Along the way, a black van began to follow them in an increasingly sinister manner. The mystery van driver even followed them to the home and left a videotape on the doorstep. The tape showed how the driver had been filming them the entire time, peeping in on them partying and even entering the house while they slept.

You greet Evil Things with a predictability as it opens amid newsclips and police statements about the missing people. We watch as the group set out on their journey and are soon being followed by an ominous black van. Here it almost feels as though Evil Things is setting out to be a Found Footage equivalent of Duel (1971) with its image of a large black truck following Dennis Weaver down a highway and engaging in a series of psychological games. (Just as in Duel, we never get to see the driver of the vehicle).

You eventually do absorb into what is going on. The group all give credibly convincing performances – some of them even not too bad. Director Dominic Perez gives an undeniable psychological tension to the van’s appearances – just the way it ominously cruises into the drive-in section of the diner in the background while they are sitting eating, or the fine scene where they think the van has followed them to the house and the driver is knocking at the door, only for Perez to deflate the tension by revealing the person at the door is Elyssa Mersdorf’s aunt (Gail Cadden).

Thereafter, as the group sit up drinking and fooling around, the incident with the van appears to be forgotten. The next day, the film follows them as they go out to explore caves in the area but become lost in the woods as it gets dark. Here the film gives the appearance that it has jumped tracks and is now venturing into Blair Witch Project territory with a group mysteriously lost in the woods as someone or something may be stalking them. However, this proves to not be the case – indeed, the complaint you could make of Evil Things is that it does not need this section, it feels superfluous to the main action. It lulls you into thinking that the menace of the pursuing van has been forgotten and wondering where the film is going.

Evil Things does eventually return to its mystery stalker – and it is during this last section that it settles in with modest effect. About the point that a mystery videotape is left on their doorstep – undeniably reminiscent of Lost Highway (1997) – Evil Things throws an amusing twist on the Found Footage genre wherein not only are the group shooting a home recording as they are being stalked but we find that the stalker has been filming them the entire time as well. The viewed videotape shows the killer peeping in on them through the windows while they were partying and even creepily entering into the house to film them as they slept.

Dominic Perez develops out this last section with a reasonable tension, especially when they find the killer is in the house with them – there is a great jolt as Morgan Hooper goes out to investigate noises and then suddenly the door he has just passed through slams behind him. Maybe Dominic Perez never drags this section out to the level of unbearable suspense it could have had but there is a creepy final scene, reminiscent of [Rec], with the last survivor getting up from behind the couch, unaware of the killer standing there filming them with an infra-red lens.