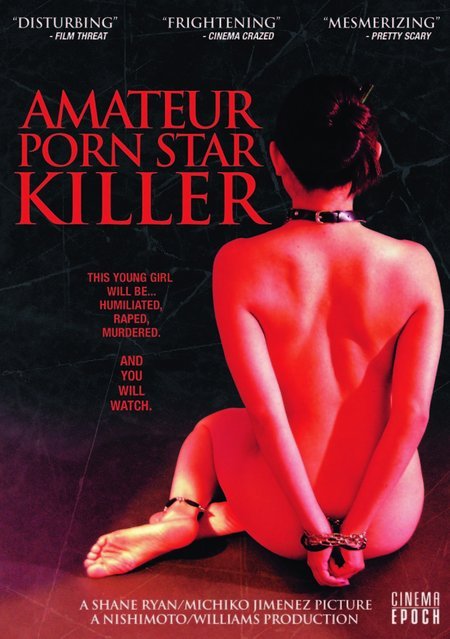 Brandon picks up Stacy, who claims to be eighteen, standing on the street and takes her back to his motel room. He films everything he is doing and asks her to be in the movie he is making. Gradually, Brandon persuades Stacy (who appears to be sixteen and may be as young as thirteen) to take off her clothes and have sex with him. What she is not aware is that Brandon is making a snuff movie.

Amateur Porn Star Killer essentially consists of one 71-minute long seduction. This proves far more captivating than one would think possible. Particularly good is Michiko Jimenez who plays with just the right degree of quiet shyness. (About the one major credibility hole the film has is that when Jimenez undresses she is clearly not the thirteen-year-old she claims to be at one point). We see very little of Shane Ryan who is operating the camera for most of the running time but what does come through is his comforting and reassuring presence from off-screen. The relationship between the two seems naturalistic and convincing. In any real world setting, you keep wondering what a teenage girl is doing out on the streets at night (unless she is on the game, which the film gives no indication she is), why she so trustingly gets into the car with a total stranger and why she never freaks out and runs when he starts repeatedly intimating what kind of movie he wants to make and then starts persuading her to undress. However, the performances of the two make these scenes extremely convincing.

The raw realism of the film makes for uncomfortable viewing. The caption on the dvd cover spells out the film’s intent with a crystalline clarity: “This young girl will be … humiliated, raped, murdered. And you will watch.” The fact that for the majority of the running time the camera is held by the male has the effect of literally making the viewer a co-participant. It is like sitting in someone else’s shoes throughout the process of an incredibly intimate seduction. The initial nervousness and tentative edging around the issue without clearly stating things comes with an authentic realism.

Of course, when it comes to the what are clearly unsimulated sex scenes, the effect is the same as if we are watching a pornographic film – but one where the camera has placed us in the eye of the male participant. Moreover, at the same time as we are watching and responding to this as one would a porn film, you are aware that the girl is supposed to be an underage girl, which immediately makes one’s involvement in watching into something taboo. Not to mention that the dvd cover and opening comments about the making of snuff movies has clued us into what her eventual fate will be. The upshot of this is to make us a guilty participant in what is happening by the very act of watching.

The interviews that accompany the dvd offer scanty information as to how the film was made. Interviewing each other, Shane Ryan and Michiko Jimenez tell how the whole film was shot in essentially one night. (One presumes the $45 budget was the cost of renting the motel room). The one thing that is not mentioned is how much of this had been scripted/rehearsed and how much was improvised in camera, or for that matter how many takes it took. Certainly, if the two were essentially making it up as they went along and doing it all in one take, it shows some phenomenal acting on their respective parts.

It is hard not to draw some similarity between Shane Ryan and Alfred Hitchcock with Psycho (1960). Both are making films about highly eroticised murders taking place in motel rooms where the viewer is made into a voyeur. You cannot compare the two in terms of style, as both are almost at opposite ends of the spectrum – Hitchcock was an exacting control freak in the way he staged shots, Shane Ryan shoots raw and on the fly. Hitchcock biographers have accused him of enacting a misogyny towards his leading ladies and that his films often acts as their symbolic rape and degradation. This is not an argument I necessarily agree with. Here though, Shane Ryan seems to go well beyond what Hitchcock ever (supposedly) did in terms of enacting an assault on his lead actress – he places himself into the frame as actor, where he is literally playing both the cameraman and the killer. Imagine the equivalent where Hitchcock not only plays Norman Bates himself but also has sex with Janet Leigh and then picks up the camera and knife to film himself stabbing her in the shower.