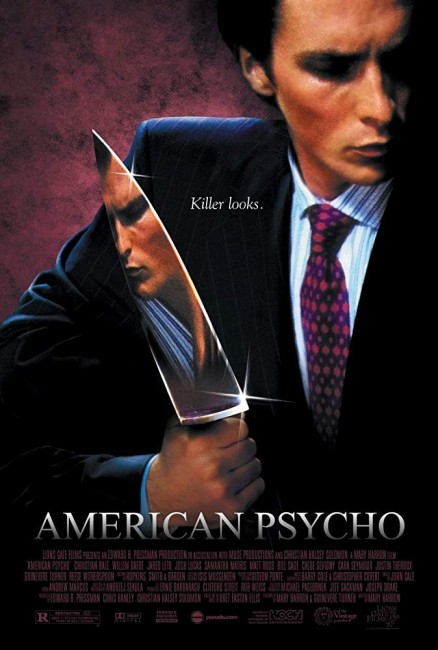 Patrick Bateman, the vice-president of a Wall Street banking firm, is obsessed with maintaining the luxury of the yuppie lifestyle but at the same time believes that he has no emotions other than greed and contempt. He starts to kill those he regards most contemptuously from the homeless to the less socially sophisticated to those who are able to earn privileges he does not have.

Bret Easton Ellis’s novel American Psycho (1991) was an enormously controversial work when it came out. It attracted attention after feminist groups obtained gallery proofs of the book and protested its violence against women, forcing its original publisher to dump the book. Bret Easton Ellis’s defence was that he was writing satire, that the book was an attack on the excesses of yuppie greed of the 1980s, although this tended to be a point that became somewhat lost in the book’s repetitiveness.

The film version of American Psycho shaped up to be no less controversial. The producers smartly critic-proofed themselves against any accusations of misogyny by hiring a female director and writing team. The production however proved problem ridden. First, there was the bickering between director/writer Mary Harron and the producers who wanted to cast Leonardo DiCaprio to ensure box-office appeal. Then came Mary Harron’s firing and reported replacement by Oliver Stone, Stone’s denial of such and then Harron’s abrupt rehiring. There was a big censorship debacle just prior to American Psycho‘s release with the MPAA demanding the cutting surprise, surprise, of not any of the film’s violence but several seconds from the lesbian mock porno film that Christian Bale sets up. Unhappy with this, the filmmakers released the censored clip via the web.

Bret Easton Ellis wrote American Psycho as a satire of New Right economics of the 1980s. On one hand, the book comes littered with lists of designer items deliberately placed to indicate an excess of conspicuous consumption. Contrasted against this comes the extremely sadistic slaughter of those who were seen as socially disposable (the homeless, prostitutes) and the less socially sophisticated. (Bret Easton Ellis and Mary Harron are not the only ones to make such connections – the film The Banker (1989) also had a yuppie financier on the rampage, albeit with less startling use of the metaphor, while the action films Hard Target (1993) and Surviving the Game (1994) show a bored elite hunting the homeless).

In the film, Mary Harron and screenwriter Guinevere Turner effectively strip the sado-pornographic excesses of Bret Easton Ellis’s novel, while also remaining remarkably faithful and indeed more subtly refining the book’s bite. In fact, you could more than reasonably argue that American Psycho emerges as a better film than it does a book. Harron and Turner even remain faithful to Bret Easton Ellis’s atmosphere of mid-1980s yuppiedom – the cellphones are all big, clunky 80s models; Ronald Reagan attempts to whitewash Iran-Contra on tv; and of course Ellis’s lectures on Huey Lewis and the News, Phil Collins and Whitney Houston are all preserved in toto from the book. (With seeming lack of awareness that they are being satirically skewered, both Huey Lewis and Phil Collins allow tracks from their albums to play on the soundtrack. The sole dissenter is Whitney Houston, although her rendition of The Greatest Love of All is replaced by a symphonic interpretation).

The film has a genuine minatory bite. Mary Harron has a sense of black humour that lurks and unexpectedly lunges, ducking around the audience and delivering blows when you least expect it. Harron looms her camera into unnerving closeup on Christian Bale – you are never sure when he or the film is going to explode into psychotic violence or say something hysterically deadpan or both at once. There is an hilarious scene where Bale brings Jared Leto back to his apartment then puts on a plastic raincoat over his suit, brings out a shining, brand-new axe and hacks Leto up screaming “You got a reservation at Dorsey’s,” all the while offering an appreciative critique of Huey Lewis.

There is a marvellous scene where Christian Bale invites Chloe Sevigny back to his apartment and Mary Harron keeps throwing pop-up effects at us – heads in the fridge when Bale goes to get her a sorbet, he placing a nailgun up against her head from behind as she sits unaware – and then turning away from expectation – they being interrupted by a phone-call from his fiancee, which visibly deflates Sevigny’s hopes that this is something more, ending on a wonderful dialogue that takes place on two levels of meaning simultaneously where she talks about not wanting to be hurt by him. Mary Harron and Genevieve Turner also write a mesmerizing series of voiceover monologues from Christian Bale.

The film’s oddest addition to the book is the suggestion near the end that none of this is real – that Patrick Bateman is only a fantasy of someone’s inadequacy complex – and that no killings occurred. It is a disorientating revelation that strongly resembles the one that came at the end of Fight Club (1999) with its surprise revelation that Brad Pitt was a figment of Edward Norton’s imagination. Indeed, both American Psycho and Fight Club are very similar films – they both hammer away with a satiric attack on conspicuous consumerism and seem to show frustrated yuppies developing violent alter egos to compensate for their own inadequacies. The two films would make for a perfect double-bill. In Fight Club the surprise revelation about the alter ego was disorientingly left field and it is no less so here – indeed even more so for Mary Harron’s uncertainty about it, with she leaving one never entirely sure at the end whether the title character was real or not. This aside, the film is a splendidly roguish piece of savagery.

American Psycho was followed by an infuriatingly bland sequel American Psycho II: All American Girl (2002) wherein Mila Kunis plays the woman who killed Patrick Bateman as a child and becomes psychopathic herself while at college.

Mary Harron had previously made the fine, incisive I Shot Andy Warhol (1996) based on the life of Valerie Solanas and went onto make The Notorious Bettie Page (2006), the vampire film The Moth Diaries (2011) and Charlie Says (2018) about the Manson Killings.

Bret Easton Ellis’s works have also been adapted as the films Less Than Zero (1987), The Rules of Attraction (2002) and The Informers (2008), while he has also written the original screenplays for The Canyons (2013), the horror film The Curse of Downers Grove (2015) in which a teenage girl has her life terrorised by a revenge-seeking jock and Smiley Face Killers (2020) supposedly based on a true-life group of serial killers.