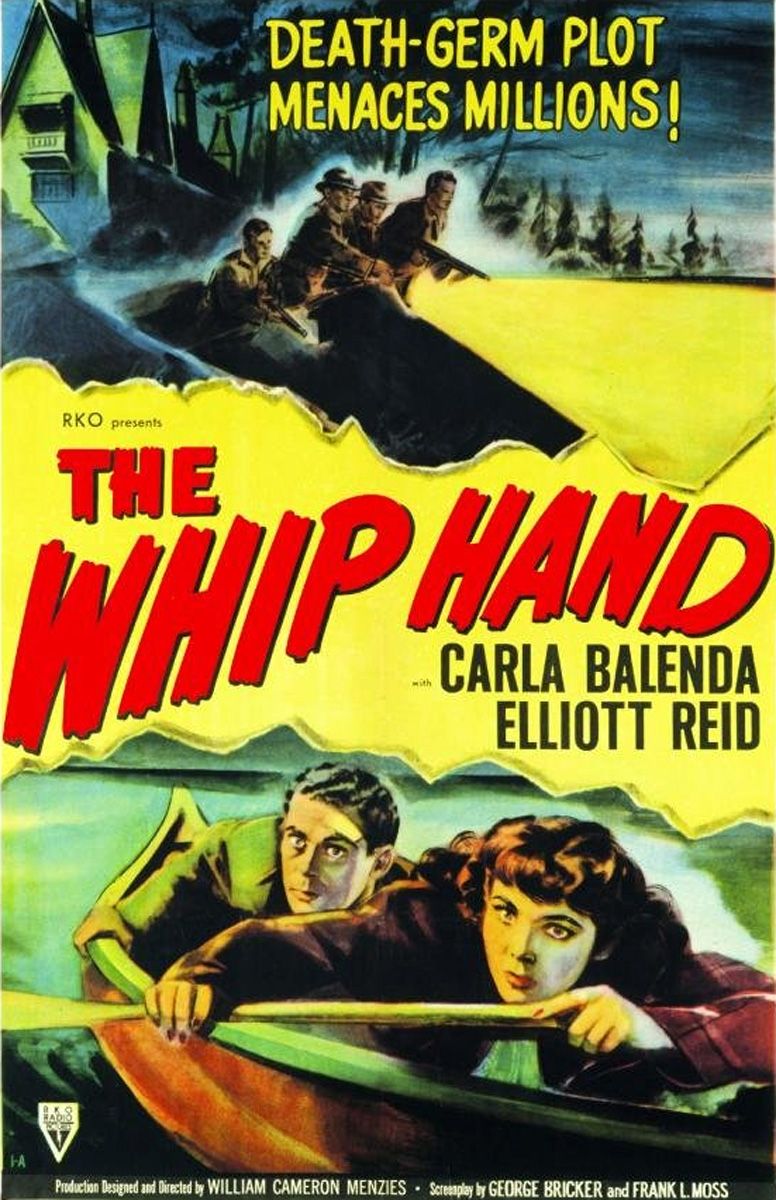 After receiving a minor contusion while on a fishing trip, Matt Corbin stops off at the small town of Winnoga to get medical attention. However, the locals seem eager to be rid of him by the next morning. This pricks Corbin’s curiosity and he decides to stay on. He is followed everywhere and then shot at when he strays onto a private estate, while all attempts for him to leave or call out are blocked. He then makes the discovery that a former Nazi bacteriologist who defected to the Communists is conducting germ warfare experiments in the town.

The Whip Hand is directed by William Cameron Menzies. Menzies was a former production designer on films like The Thief of Baghdad (1924) and Gone with the Wind (1939) who then became a director, making a number of noted genre works such as Chandu the Magician (1932), Things to Come (1936), Invaders from Mars (1953) and The Maze (1953).

This was one of the first films of the 1950s to broach the threat of the perceived Communist menace. It is borderline science-fiction, nevertheless is an important and interesting entry in the genre. William Cameron Menzies directs with the customary sense of style he brought to all his works. He is strongly reliant upon film noir stylistic effects – the generation of a world of shadowy paranoia and perpetual suspicion and distrust. The frame is always filled with threatening ambiguity, of sinister foregrounded faces meaningfully staring at one another.

In fact, what Menzies does with The Whip Hand is lay down what became the tropes that would be taken up by a subgenre of 50s science-fiction films – the alien takeover genre with the likes of It Came from Outer Space (1953), Invasion of the Body Snatchers (1956), I Married a Monster from Outer Space (1958) and of course Menzies’s own Invaders from Mars.

Menzies lays down the subgenre’s essential themes of a small archetypal American town being overtaken by an emotionless menace (be it alien or Communist) that has the semblance of everyday life, but is alien and intending to overthrow the nation from behind its mask of normalcy. The familiarity of style between The Whip Hand and these other films is remarkable, all the more so for the fact that this film seems to come out and give a name – Communism – to the unnamed threat that these other films seemed to fear so greatly.