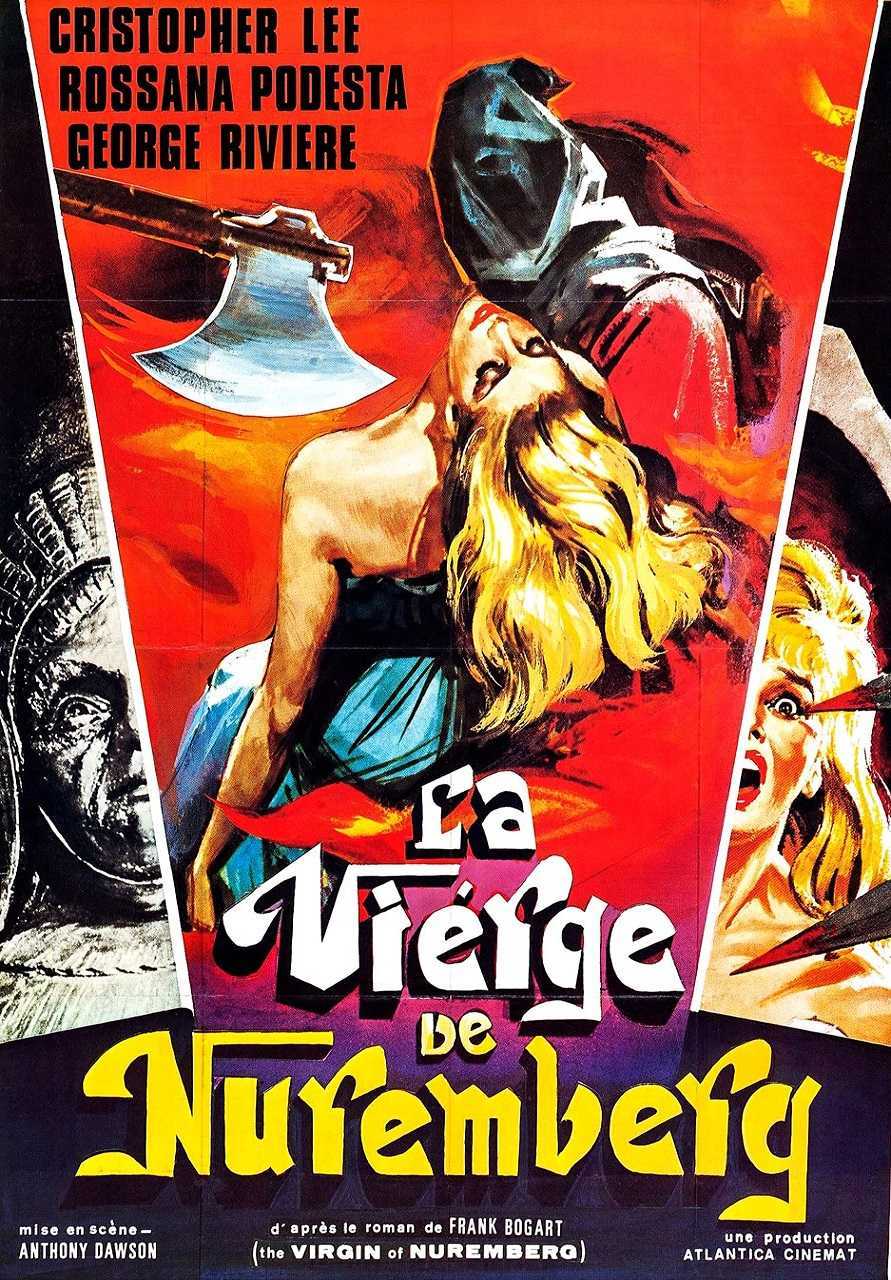 Mary has married Max Hunter and returned to his family castle in Nuremberg. His ancestor was a notorious  tyrant known as The Executioner who employed an iron maiden that was nicknamed The Virgin of Nuremberg. The dungeon has now been turned into a museum. However, Mary finds that the scarlet-hooded figure of The Executioner is prowling the halls of the castle at night seeking new victims.

The Continental Gothic is a term applied by this site to a certain group of films that emerged principally from Italy during the 1960s. The genre was kicked into high gear with Mario Bava’s Black Sunday (1960), which was the most influential work of the genre (although was not the first) and set the style. The Continental Gothic drew on the undeniable influence of Hammer Films and Roger Corman’s Edgar Allan Poe adaptations but created their own unique style – all shot in moody black-and-white, featuring supernatural retributions and resurrected witches in beautiful decaying castles and old houses. Many of the films also featured British actress Barbara Steele whose haunting wide-eyed beauty became an indispensable fixture of the genre.

Most of these Continental Gothic films hide under a plethora of alternate and English-language titles or dvd/video retitlings. The Virgin of Nuremberg is the English-language translation of the Italian title and the film is known under that name in many places. It is also variously known as The Castle of Terror, Horror Castle and Terror Castle. This is highly confusing given that it is one of no less than three similarly titled films that all came out within the space of two years, including Nightmare Castle (1965) and Castle of Blood (1964), also from Antonio Margheriti.

The film opens well with a full flight of the genre’s tropes. The opening scene has newlywed wife Rossana Podesta waking up in the midst of a lightning storm outside her bedroom. She moves out into the rest of the castle, which is draped in visually stunning scarlet red curtains, hangings and carpet, before she enters the torture chamber where husband George Riviere introduces the iron maiden that proves to be the titular Virgin.

The film is visually ornate – the grounds are lush, the balustrades even come with gargoyles leering over the top. There are dungeons with figures in scarlet hooded robes lurking through the shadows. The surprise about the film is when we exit the house some way in and see a car drive off and realise that the setting is contemporary 1960s – so successful does Antonio Margheriti establish the Gothic mood that we automatically assume the film has a 19th Century setting.

Antonio Margheriti creates some fine scenes throughout. The severe maid (Laura Nucci) warns Rossana Podesta to stay in her room overnight and to lock the door and not open it for anyone. She does but then comes the voice of her husband calling to her to open up. As she wavers, the black gloved fist of The Executioner starts smashing through the panel and trying to force his way in. There is also a nasty scene where The Executioner abducts a woman (Anny Degli Uberti) and brings her to his torture chamber where he places a cage over her head and opens it to unleash a rat that start gnawing at her face.

When revealed, The Executioner has a suitably hideous face. Indeed, along with his Nazi background origin story, you cannot help but think of Red Skull of Marvel’s Captain America fame. Much of the plot was ripped off by the subsequent The Bloody Pit of Horror (1965), which had a figure known as The Crimson Executioner, and there are surprising similarities to the subsequent Stuart Gordon film Castle Freak (1995).

The one novelty the film has is that it manages to import Christopher Lee who was at the height of his fame at the time thanks to Hammer Films. Unfortunately, the film dubs Lee’s voice with another actor thus robbing us of his magnificent basso tones. The voice he is given certainly comes close to what Lee is like but is no substitute. One of the other downsides of the film is that it employs an iconic actor like Lee and then wastes him in a nothing supporting role as a servant. Even then, the end of the film leaves you unclear whether Lee is a good guy, has sinister intent or is just a loyal servant to the deranged madman stalking the halls of the castle.

Hidden behind his common English-language pseudonym of Anthony Dawson is Italian director Antonio Margheriti. Antonio Margheriti’s other genre films are:- the space opera Assignment Outer Space (1960), the space opera Battle of the Worlds (1961), the Gothic Castle of Blood (1964), the peplum Devil Against the Son of Hercules (1964), the peplum Hercules, Prisoner of Evil (1964), the Gothic The Long Hair of Death (1964), War of the Planets (1965), the space opera The Wild, Wild Planet (1965), the spy film Lightning Bolt (1966), the space opera War Between the Planets (1966), the space opera The Snow Devils (1967), the giallo The Young, The Evil and the Savage (1968), the giallo The Unnaturals (1969), the invisibility comedy Mr Superinvisible (1970), the Gothic Web of the Spider (1971), the giallo Seven Dead in the Cat’s Eye (1973), the gonzo Western comedy Whiskey and Ghosts (1976), the cannibalistic Vietnam Vets film Cannibal Apocalypse/Cannibals in the Streets (1980), the adventure film Hunters of the Golden Cobra (1982), the post-holocaust barbarian film Yor, The Hunter from the Future (1983), the adventure film The Ark of the Sun God (1984), Treasure Island in Outer Space (mini-series, 1987), the alien nasty film Alien from the Deep (1989) and the sf/action film Virtual Weapon/Cyberflic (1997).