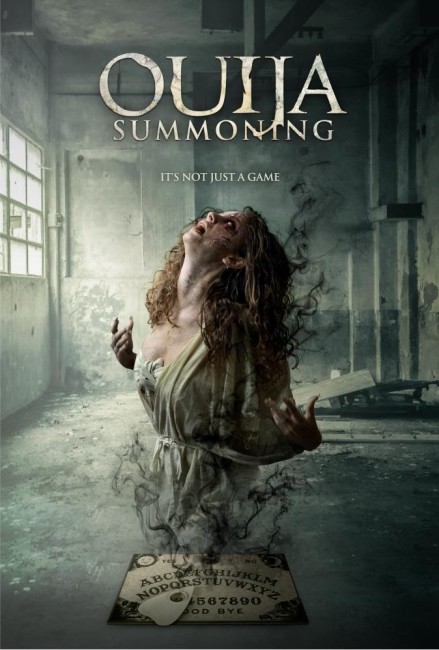 aka You Will Kill; Ouija: The Devil’s Game

Sara Thompson goes camping with her boyfriend Brian but is irritated to find he has brought along his friend Santiago on what was supposed to be a weekend away for the two of them. Santiago picks up an ouija board from a house they stop at on the way. Before they go to sleep at the campsite, they play with the board but Sara becomes scared. Things happen in the night and Sara gets up to find Santiago dead. Back home, she is troubled by visions of a ghostly woman who tells her that Sara is going to kill her grandmother and others. Soon after, Sara finds the people predicted in her vision are being killed.

You Will Kill is a film that is completely unmemorable in every way. Its cast and its crew are/were all unknowns. The only notice the film received was when it was retitled Ouija Summoning (Ouija: The Devil”s Game in the UK) in an attempt to capitalise on the release of Blumhouse”s Ouija: Origin of Evil (2016). Even then, the only real relevance the ouija aspect of the title has is that a board is picked up by Richard Muller during the stopover at cordoned-off murder house and is used while they are at the camp. However, for all its being promoted to being in the title, the ouija board never reappears again after that scene.

You Will Kill/Ouija Summoning is utterly generic in every respect. In fact, it so disappears into forgettability, I am struggling to remember details as I write it up a couple of days after watching it. Director Marwan Mokbel does all the things that make horror tedious – long drawn-out scenes that seem to be pumping atmosphere up far more than it needs to be; fake jumpshocks like people banging on a car window. Certainly, I do have to commend Marwan Mokbel as there are one or two scenes where he does manage to make us jump with shadowy figures abruptly running at people or suddenly appearing behind them.

However, that brings us to the largest problem that exists with the film. And that is that it is never clear what is going on. There’s a prologue with a woman coming to the house and being attacked by her knife-wielding mother but, despite the fact that the three friends visit the house early in the show, it is not clear how this relates to anything that happens subsequently.

There is the seance at the camp and thereafter Tara Shayne is suddenly cursed or develops the ability to foresee the deaths of the people around her. Why her and those she knows (as opposed to the two guys who actually participated in the seance) is never made clear. There is also the figure of a woman with hair across her face not akin to something out of the Japanese Ring and Ju-on films, although it is never explained who this person is and why she is killing members of Tara Shayne”s family.

You Will Kill/Ouija Summoning was a directorial debut for Marwan Mokbel. Mokbel subsequently wrote the script for the Found Footage horror film Junoon (2020).