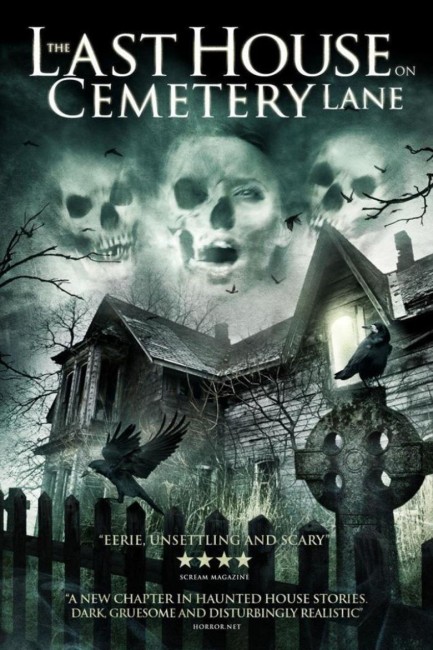 John Davies rents Oakwood House in rural Wales for several weeks in order to work on a screenplay. He is told by the realtor that there is another tenant, the blind and elderly Agnes who lives on the third floor. He is not happy with this but accepts the situation. He soon befriends and develops an attraction to neighbour Cassie Konrad. At the same time, John begins to experience increasingly haunted and mysterious things happening in the house.

The title of the film suggests something along the lines of one of several copies of Wes Craven’s The Last House on the Left (1972) that we had in the late 1970s/early 1980s. In actuality, The Last House on Cemetery Lane is nothing more than a standard haunted house show. This modern ghost story is a genre that has reached a point of market glut especially down the low-budget end of the scale where most efforts end up being delivered these days – see Hauntings and Ghost Stories. The blind lady in the attic also harkens back to something of The Sentinel (1977).

Andrew Jones delivers a haunted house film that is slow going – about the most spooky it ever gets for a large chunk of the running time is a record player that keeps turning itself on late at night. About three-quarters of the way through, Jones does deliver an eerie scene where Lee Bane conducts a seance with an ouija board.

This is followed by an unexpected twist where [PLOT SPOILERS] we learn that one of the characters throughout is not alive. It is a familiar twist that has been overused in recent years but is effectively delivered. The rest of the film though has little that is interesting happening.