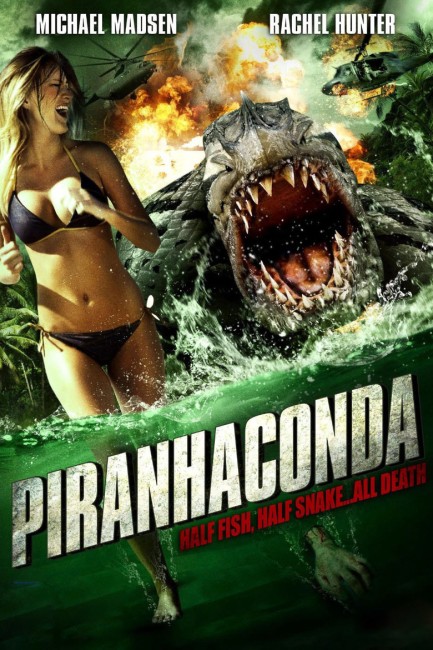 Herpetology expert Professor Robert Lovegrove heads into the jungles of Hawaii in search of a mythical giant snake, nicknamed a ‘piranhaconda’. He is then abducted by Pike and his armed men who decide to demand a ransom. Meanwhile, the B movie ‘Head Chopper 3’ is shooting in the area when the film crew start being devoured by the piranhaconda. The director, lead actress and several of the crew are then abducted by Pike and his men. As they make an escape, they must also deal with the attacking piranhaconda.

The success of Mega Shark vs Giant Octopus (2009) created a fad for increasingly tongue-in-cheek monster movies. This led to the popular hit of Sharknado (2013), along with a host of other absurdly titled shark films. Amid this there was a spate of monster movies that served up ridiculous hybrid creatures – see the likes of Dinocroc (2004), Dinoshark (2010), Mega Shark vs Crocosaurus (2010), Sharktopus (2010), Mega Python vs. Gatoroid (2011) and Cobragator (2018).

Piranhaconda was one of these hybrid monster movies from Jim Wynorski who has a long career making B movies since the heyday of the 1980s. Wynorski started out just as the video market arrived and has made over a hundred films since then. (See below for a full list of Jim Wynorski’s other genre films). He almost always works within genre material, making horror, action and science-fiction films, often with tongue planted in cheek. Most common has been Wynorski’s dabbling in softcore erotica – all of his films make a virtue of their T&A content and he was one of the directors prominently associated with the late 1980s/early 90s Scream Queen fad. He has been a frequent contributor to the softcore parody film beginning with the popular The Bare Wench Project (1999) and has put out titles such as The Witches of Breastwick (2005), The Breastford Wives (2007), The Da Vinci Co-ed (2007) and Cleavegefield (2008), among others.

I am not much of a fan of Jim Wynorski’s films. In comparison to his nearest contemporary (and sometimes collaborator) Fred Olen Ray, Olen Ray at least makes films with many of the basics – plot, technical competence, a passable respect towards drama. When it comes to Wynorski, you get the impression that he either lacks the skill or no longer cares. The films – of which Piranhaconda is a perfect example – seem churned out with an indifference towards whether they are any good.

Within moments of opening, Piranhaconda sinks down to the incredibly bad. We first get to see the title creature emerging out of a pool in some really bad digital effects. Its appearance in this scene is conveniently hidden by having the camera covered in a red haze that one guesses is meant to be spilt blood. We then come to the scene where it plucks a helicopter down in its jaws where none of these effects are hidden and the result is painful to behold. Much of the rest of the film is dependent on these cheap digital effects.

The one area where Wynorski seems uncustomarily restrained is when it comes to his usual line-up of incredibly well stacked bimbos. They are there but he has chosen to deliver a PG-rated film and so we never get to see any of them undressed beyond bikinis or closeups of butts. Most of the cast are unknowns, although Rib Hillis has since gone on to develop a moderate B movie career. The two names the film headlines are Michael Madsen and Rachel Hunter, neither of whom are present much. With craggy voice and tattooed wrists showing, Madsen is a great actor to cast as a tough guy. On the other hand, you feel that his rugged macho persona is badly out of place here when it comes to him playing a scientist.

New Zealand-born Rachel Hunter was a super-model in the 1980s and 90s after appearances on the cover of Sports Illustrated. Since then, she has struggled to maintain a career as an actress but has so far failed to appear outside anything that has been released only to cable and/or video. Here you get the impression she was paid for only a few days or else quit the production part way through. She has a handful of scenes as Michael Swan’s girlfriend, gets to speak barely half-a-dozen lines and wave around a machine-gun before being abruptly killed off part way through the film during one of the piranhaconda’s attacks.