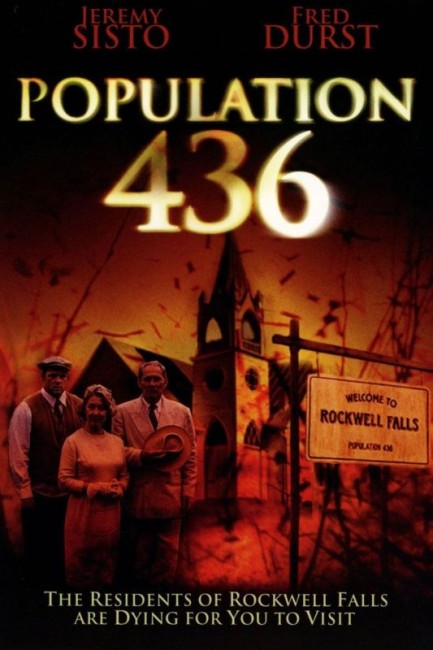 US Census Bureau worker Steve Kady travels from Chicago to the small nowhere town of Rockwell Falls to poll the townspeople. He is puzzled to find that every record since the 1860s shows that the town’s population has been exactly 436. Steve also finds the locals acting oddly, insisting that he now lives there and treating anyone who wants to leave as though they have a mental illness. Steve then learns that the locals have struck a deal with The Almighty that means that the town is always perfect but only as long as the population remains exactly 436. Having spent the night there, the locals now consider Steve a member of the community. He finds that this means that somebody has to be hung in a public ceremony in order to balance the numbers. Steve considers them to be crazy and makes all effort to escape the town.

Population / 436 is an interesting minor direct-to-dvd release from Destination Films. It is a venture into the theme of the sinister small town. Genre cinema has frequently offered up visions of small town normalcy being infiltrated by sinister forces a la the likes of Invasion of the Body Snatchers (1956), Village of the Damned (1960), The Stepford Wives (1975) and Salem’s Lot (1979). In recent years, the theme has evolved into the idea of the Canker in Utopia – an outsider arrives in a small town that seems like an idyllic vision of the perfect life only to discover that the cost of this is something diabolical – as we see in the likes of The Spring (2000) and Black River (2001).

Population / 436 keeps one watching by sole dint of trying to work out what is going on (although, a close viewing of the opening scene gives the game away). As with these abovementioned films, there is the image of a small town that seems idyllic and perfect – it is even named Rockwell Falls, presumably after artist Normal Rockwell who created idealised paintings of ordinary America. The main problem is that Michelle MacLaren directs the film with a laidback and indifferent pace, exactly like it was a tv movie. She never does much to make us feel involved in Jeremy Sisto’s nightmare.

The film picks up somewhat after the first hour with the eminently out there moment where Jeremy Sisto is told that a festival has been arranged for him and then a tarpaulin is whipped away to reveal a set of gallows where a woman happily allows herself to be hung for the sake of balancing the population numbers. This is followed by scenes where we see Jeremy Sisto being held down and ECTd for wanting to escape from town, as well as images of a family being kept in a jail cell until they learn to become the perfect nuclear family unit. The film arrives at a nicely ironic ending.

The problem is that Population / 436 takes such a long time to pick up a head of steam that by the time it arrives at anything interesting one has switched off. It is solely the desire to work out what is going on that keeps one there. Although, even the ending fails to give much of an explanation as to the agency that is keeping the town in this state. It is suggested that this was a deal with The Almighty, but surely only some kind of deranged Old Testament prophet could possibly see the idea of a town where the people have to murder one of their number every time a new person arrives in town as being divinely blessed.

Population / 436 stars Jeremy Sisto, who has been an actor full of promise ever since his appearance as the disturbed brother in tv’s Six Feet Under (2001-5). Sisto gives an okay, although hardly standout, performance here.