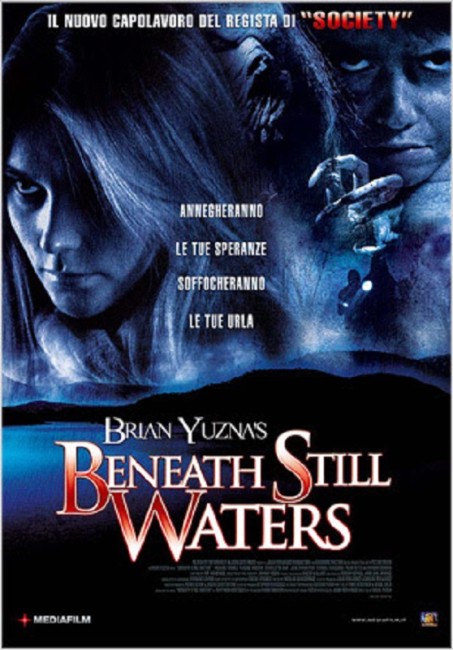 In 1965, the Spanish town of Marienbad was flooded as part of a dam construction project by the people of the nearby town of Debaria. Forty years later, the dam is completed and about to be opened. Photojournalist Dan Quarry arrives in Debaria to take underwater photos of the sunken town. At the same time, people start turning up dead in the lake and covered in black ichor. Dan teams up with tv reporter Teresa Borgia, whose father was the mayor who led the construction of the dam, and they set out to investigate. As they discover, Marienbad was inhabited by occultists led by Mordecai Salas who conducted abominable rituals and the town was flooded to be rid of them. The undead Salas now rises to claim the lives of the townspeople.

Brian Yuzna first emerged as a producer for Stuart Gordon with Re-Animator (1985), From Beyond (1986) and Dolls (1987). From there, Yuzna went on to make his directorial debut with the perversely entertaining Society (1989) followed by a string of films that included Bride of Re-Animator (1990), Silent Night, Deadly Night 4: The Initiation (1990), Necronomicon (1993), Return of the Living Dead III (1993), The Dentist (1996), The Dentist 2 (1998) and Progeny (1999). These all came with strikingly perverse and fetishistic imagery and an instinctive flair for the use of makeup effects.

I liked Yuzna’s films throughout the 1990s but I don’t think the works that he directed during his Spanish sojourn are that good – the only of these films that stands out above average is Beyond Re-Animator. Equally, the films he produced during this time are largely undistinguished with the exception of the standout Romasanta. What these films are better remembered for is introducing or given wider exposure to names that have since gone on to become major genre directors such as Paco Plaza, Jaume Balaguero and The Mo Brothers.

Beneath Still Waters is an unremarkable Brian Yuzna film. His direction throughout is middle of the road with little that is standout. Also off-setting many of Yuzna’s Spanish films is that he casts them with predominantly Spanish actors some of whom are not fully conversant English speakers, giving the dialogue a stilted and non-naturalistic feel. The menace is a not particularly distinct – occultists who were drowned in the submerged town emerging to take revenge, led by a leader who you keep thinking resembles a vampire and a black ichor that causes people to melt down. The film only really has some novel effects every so often driving it.

As is always the case in a Yuzna film, there are some excellent makeup effects. There is a very creepy thin creature that appears in the bowels of the dam. Or the scene where the plants come out of the water and completely cover Diana Peñalver. The film is occasionally peppered up by some of Yuzna’s perverse imagery. In one scene, Pilar Soto strips her top off to go swimming in the lake in her boyfriend’s memory only for his zombie to emerge out of the water and to hump her on the sand before tearing her throat out. The film does climax with an orgy amongst the townspeople that comes with plentiful nude bodies, nun sex, goat sex, assorted whippings and others smeared in food.

Beneath Still Waters is adapted from a 1989 novel by Matthew Costello, mostly a writer of film and videogame novelisations, plus several original works and children’s books. Costello also works as a scriptwriter for numerous videogames.