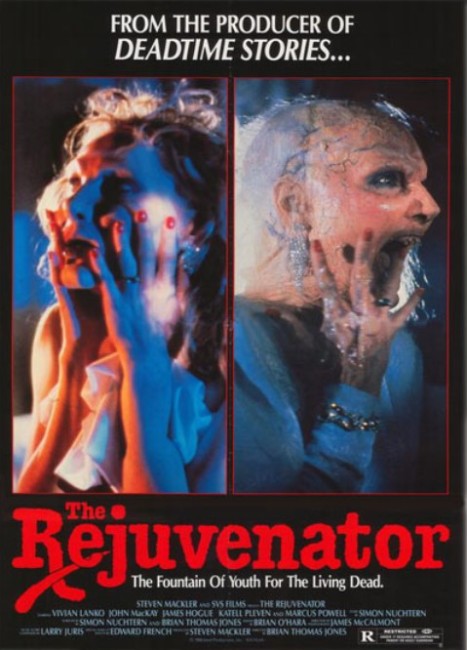 Dr Gregory Ashton is conducting experiments to create a rejuvenation serum using fluids drawn from the brains of cadavers. He is being financially backed by Ruth Warren, an aging movie star who is desperate to regain her youth. At Ruth’s urging, Ashton injects her with the untested serum. The results are remarkable – Ruth emerges from the bandages looking like a young woman again. She makes immediate plans to pass as her niece Elizabeth while saying that Ruth has gone touring internationally. However, after Ashton spends the night with her, Ruth awakens an old woman again. She requires stronger doses of the serum to become young again. However, Ashton’s sources of brain fluid are running out and he can only obtain more supplies by illicit means. At the same time, as each dose wears off, Elizabeth turns into something monstrous that starts attacking people and drinking their brain fluids direct.

The Rejuvenator/Rejuvenatrix was a classic work from the heyday of the 1980s vhs horror release. Nobody involved seemed to much go on to do anything else of note. Indeed, the only real name of note present is makeup effects artist Edward French who produced effects for a good many films of this era including C.H.U.D. (1984), Breeders (1986) and Creepshow II (1987), among others.

The Rejuvenator/Rejuvenatrix essentially takes the plot of the 1940s rejuvenation film such as The Man in Half Moon Street (1945) and tricks it out with 1980s-era makeup effects. As such, the film is a fairly typical makeup effects vehicle of the period, based around a series of entertainingly absurd set-pieces and gory meltdowns. There is a fairly impressive scene where Vivian Lanko turns into goo-dripping monster at the end of the show. The rest of the film is on the passably cheap side. In terms of plotting, everything heads in predictable directions.

Brian Thomas Jones made his directorial debut here. He went on to make half-a-dozen other films, including the obscure sf film Escape from Safehaven (1989) and the slasher film Posed for Murder (1989).