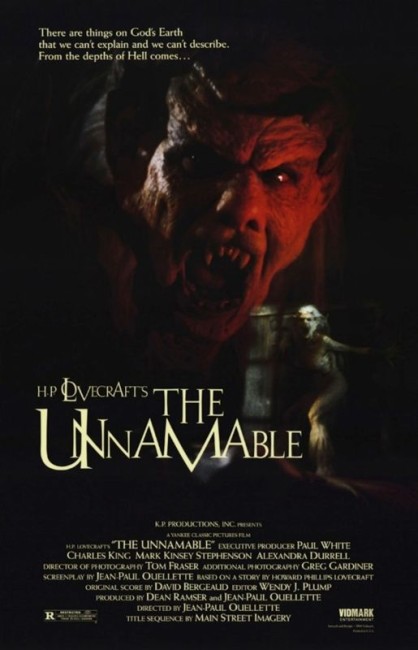 At the Miskatonic University in Arkham, Joel Manton ridicules Randolph Carter, who is obsessed by occult lore, when Carter tells him how 200 years before local Joshua Winthrop was killed by a demon in his attic. To prove Carter wrong, Joel decides to spend a night in the Winthrop house. When Joel fails to return, Carter and mutual friend Howard Damon go to investigate. At the same time, two fraternity jocks take two girls to the house for a supposed initiation rite, only to disturb the thing that lurks in the attic.

The Unnamable gives the appearance of having been slung together by student filmmakers looking for a big break and feels amateurishly made. Most of the performances seem to be given by non-professionals. There is not much to the film – the bulk of it consists of people wandering around the house and being killed.

The plot that holds all this together is exceedingly slim. There is little explanation of what is going on – it is never explained why Winthrop’s daughter is a demon, for instance. The original Lovecraft story, published in Weird Tales in 1925, is almost as slight. It is actually more of a ghost story – most of it is about two friends sitting in a graveyard discussing a house where something sits at the window and whether its presence has inhabited the window. The story ends with the two friends being attacked by the creature. As a result, the film has to invent the entire backdrop about the Winthrop family.

Director Jean-Paul Ouellette does a fair job at times – some of the attacks are okay – but fails to pump up the atmosphere much elsewhere. One thing to be said in Jean-Paul Oullette’s favour is that he makes a moderate stab at taking his H.P. Lovecraft seriously – which would make The Unnamable one of the few films of the whole post-Re-Animator cycle to do so. There is some effort made to attain a Lovecraftian mood by keeping the demon in the house unseen until right up to the end. In the end though, it is hard to swallow a contemporary Miskatonic University that has been taken over by fraternities, Ivy League snobs and jocks on the prowl.

Jean-Paul Oullette and star Mark Kinsey Stephenson returned for a sequel The Unnamable II: The Statement of Randolph Carter (1993). The only other film Jean-Paul Oullette has made is an obscure martial arts film Chinatown Connection (1990).