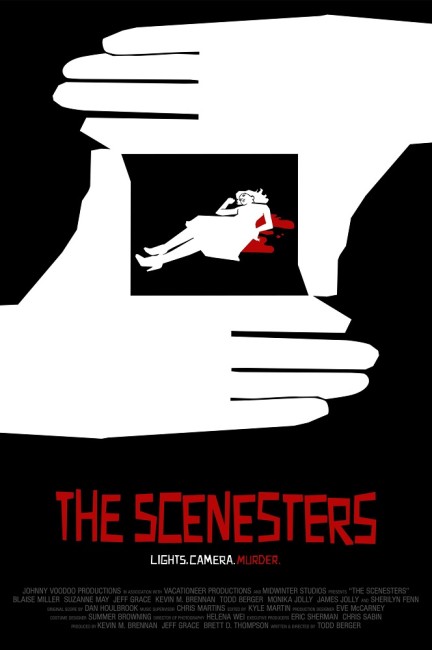 At a trial taking place in Los Angeles, District Attorney Barbara Dietrichson seeks to determine what happened. Filmmaker Wallace Cotten tells how he was hired by the LAPD as a crime scene videographer. During the course of their work, crime scene cleaner Charlie Newton discovered that someone had left cryptic clues in the arrangement of cd racks at several murder scenes. Wallace, his producer Roger Graham and Charlie realised they were dealing with a serial killer. Wallace immediately decided that rather than hand this evidence over, they should make a documentary about it. As they set about doing so, Roger decided they needed to create a romantic arc for Charlie as the film’s hero and tried to push him to reunite with his ex, tv news reporter Jewell Wright. At the same time, the killer became aware that they were making the documentary and began to contact Wallace offering to help.

The Scenesters was the first film from writer-director-actor Todd Berger. Berger is a member of the comedy troupe Farce Force 5 and had previously worked as an actor in minor parts in various films. Berger has made several short films as director and wrote the scripts for various Kung Fu Panda and Smurfs short films, before making his feature-length directorial debut here. Subsequent to this, Berger went on to direct the comedy It’s a Disaster (2012) in which four couples gather for lunch as the End of the World happens outside and the non-genre multi-point-of-view film Cover Versions (2018), as well as to write the script for the very adult puppet film The Happytime Murders (2018).

The Scenesters came out just before the Found Footage film gained a whole new boost with the release of Paranormal Activity (2007) in 2009 – the major influence at the time would have been The Blair Witch Project (1999), although more likely Todd Berger was taking inspiration from a whole series of CSI-reality tv shows. Berger makes the funniest spoof of the Found Footage format to date. The film adeptly switches between footage shot by the video crew, a court tv show (with former David Lynch ingénue Sherilyn Fenn as the prosecuting DA), tv news reports and stylishly-shot black-and-white footage mimicking a serious art film.

One of the appeals of The Scenesters is the whiplash adeptness of Todd Berger’s sense-of-humour where whatever is going on is constantly being pulled back from to reveal something else or the scene is turned on its head. A production meeting held by producer Jeff Grace is revealed to be him seemingly recruiting for a rival film using Todd Berger’s office. Grace then decides to shoot his competing film and comes to the conclusion “Your character needs a love life” and pushes Blaise Miller to reconcile with tv news reporter ex-girlfriend Suzanne May. The film comes with hilariously one-liners – Todd Berger’s director is overcome with admiration upon seeing the killer’s footage: “His composition is amazing. He’s like the Janusz Kaminski of serial killers” – (Kaminski being the regular cinematographer for Steven Spielberg).

Berger is constantly piling on even more appealingly absurd twists. Like when Blaise Miller confides what they are doing to ex-girlfriend Suzanne May and they find their big scoop all over the news and then that the police have brought in a Danish film crew to shoot the real investigation. The film becomes positively hilarious about the point that Todd Berger’s director receives phone calls from the killer offering help and is then contacted by a man claiming to be The Soloist. We then see Berger’s director auditioning actresses for the role of the next victim and then Berger stopping the killer and telling him that he is not threatening them menacingly enough, all before the rival film crew walk in and reveal that the killer is no more than a wannabe actor who is faking the part.

(Nominee for Best Original Screenplay at this site’s Best of 2009 Awards).