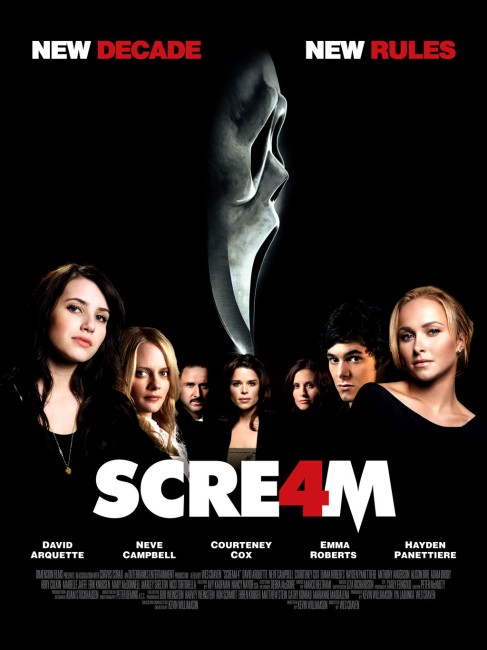 Sidney Prescott returns to Woodsboro for the first time in several years on a signing tour for the book she has written about her experiences in which she has determined to reclaim her role from being a permanent victim. It is the anniversary of the original Ghostface killings and Dewey Riley, now the sheriff and married to Gail Weathers, must deal with a spate of copycat killings. Sidney goes to stay with her aunt and is witness as the new Ghostface targets her teenage niece Jill and friends. Gail determines to investigate the killings on her own, using the high school’s cinema club to try to find what the new rules of the horror movie are in the 2000s. As they discover, the unexpected is now the new rule and new Ghostface is attempting to reboot the ‘Stab!’ movie franchise and do one better by broadcasting the killings on the internet.

Scream (1996), based on an ingenue script by Kevin Williamson and directed by genre legend Wes Craven, was a hit that became one of the most influential horror films of the late 1990s/2000s. The then unknown Kevin Williamson had written Scream as a spec script and this immediately became subject to a bidding war. Williamson’s ingenuity was to pay tribute to the favourite horror films of his youth, in particular to the 1980s era of the Slasher Film – Halloween (1978), Friday the 13th (1980) et al – but at the same time winding the homage into an ingenious meta-fiction where characters were constantly comparing their situation to how characters in horror movies acted.

Scream was a considerable success and Wes Craven and Kevin Williamson quickly teamed up for Scream 2 (1997) and Craven minus Kevin Williamson went onto make Scream 3 (2000), both featuring return performances from Neve Campbell, David Arquette and Courteney Cox. Subsequent to this, the premise was reworked by Williamson as the tv series Scream: The Series (2015-9). More than that, Scream created the template for the 1990s/00s horror and slasher film. Other films came out seeking to replicate Scream‘s motifed killings or featuring characters comparing their situation and referring to other horror movies – see the likes of Urban Legend (1998) and sequels, Cherry Falls (2000), Final Destination (2000) and sequels, and Valentine (2001).

Following the Scream trilogy, neither Wes Craven and Kevin Williamson seemed to do much for the rest of the 00s. Wes Craven only directed two other horror films – the Kevin Williamson-scripted werewolf film Cursed (2005) and My Soul to Take (2010), both of which were regarded as big disappointments, as well as the okay non-genre thriller Red Eye (2005). Indeed, during this decade we saw more in the way of remakes of Wes Craven’s films – The Hills Have Eyes (2006), The Last House on the Left (2009) and A Nightmare on Elm Street (2010) – than he has spent time making original horror material.

Kevin Williamson wrote a couple of other successful scripts with I Know What You Did Last Summer (1997) and The Faculty (1998), both in the same wryly mocking genre in-referential style, then had a flop with his directorial debut Teaching Mrs. Tingle (1999) and abandoned cinema screens for a time. Williamson’s greatest success since Scream has been in television, as creator/producer of Dawson’s Creek (1998-2003), The Vampire Diaries (2009-17) and The Following (2013-5), although even here he has had a couple of never-ran series with the short-lived likes of Wastelands (1999), Glory Days (2002), Hidden Palms (2007) and Time After Time (2017). There is the sense that both Wes Craven and Kevin Williamson felt a need to return to the Scream franchise to rediscover what they did so well back in the beginning.

It is immediately apparent from the opening scene of Scream 4 – or Scre4m as it is known on the opening credits (which is always taken as the official title of a film by this site) – that Kevin Williamson still has the same dazzling ingenuity and meta-fictional playfulness that he showed on the first Scream. Indeed, the cleverness of the opening scene alone propels Scre4m to being the best of the Scream sequels. We start off as two girls (Lucy Hale and Shenae Grimes) prepare to watch Saw IV (2007), which becomes the chance for Kevin Williamson to launch into dissecting the Torture Porn fad and stand up for character-driven drama. They then receive a Ghostface call and are attacked, before this becomes a pull-back to two girls (Anna Paquin and Kristen Bell) watching a dvd where the scene we have just watched is the start of Stab! 6 and they debate the cliches of the series before Kristen Bell states that “the unexpected is the new rule” and turns and stabs Anna Paquin, saying “Now, that was unexpected,” before this becomes yet another pullback to two girls (Aimee Teegarden and Brittany Robertson) watching this on dvd and this is the opening of Stab! 7 and they are then attacked.

The playful ingenuity that Kevin Williamson engages in with these multiple nested pullbacks and characteristically wry monologues makes this one of the funniest and most entertaining opening sequences that one has seen in a film in a long time. Kevin Williamson pushes the meta-fictional irony to the point that he even has the characters in the film commenting on the postmodern fad for characters comparing their actions to other horror films, creating a film that operates at so many levels of self-aware recursion as to be downright mind-spinning.

Scre4m is perfectly aware that not only has the horror genre changed in the fifteen years since the original film came out, but so also has the nature of media and telecommunications. In 1996, the internet was only just starting to change peoples lives, while cellular technology was still at the level of clunky brick-shaped phones and texting had yet to hit the public paradigm. Scre4m smartly updates itself to not only make reference to these and have the new Ghostface taking advantage of social networking services like Facebook and Twitter, but builds an entire theme out around how the killer is driven by seeking the instant fame and celebrity offered on the internet. Equally, Kevin Williamson makes a number of digs at the mountain of horror remakes we have seen in the 00s beginning with The Texas Chainsaw Massacre (2003). The end of the film is swung around to have the new killer attempting to conduct a ‘reboot’ of the Stab! franchise with themselves as the star before a downed Neve Campbell gets up to fight back with the line “The rule of remakes is ‘Don’t fuck with the original’.”

Wes Craven and Kevin Williamson put on a highly entertaining show, even if nothing else in the film quite matches the ingenuity and meta-fictional playfulness of the opening scene. The references to classic horror movies are slightly the less this time, although Kevin Williamson still has fun creating a new set of rules for the 00s – he even creates a drinking game for watching the series. There are wryly amusing lines: “Everywhere she [Sidney Prescott] goes, people end up dying. Stab! is the wrong franchise for her, she should be in the Final Destination series.” There is an equally amusing scene where two deputies debate the rules of cop movies.

Throughout Williamson introduces the running theme of “the unexpected is the new rule” and talks about how the modern trend is reversal of expectations and topping the original, Despite such, it should be noted that Scre4m eventually stays with the expected and never does anything truly off the page. There is a reasonable surprise to the revelation of the identity of the killer but Scre4m never goes so far as to be totally unexpected with this – I kept expecting by about the halfway point the film would end killing off Neve Campbell or even reveal that she was the killer.

Like the other Scream films, Wes Craven does a competent job directorially His work here lacks the directorial elan with which he imbued other classics such as A Nightmare on Elm Street (1984) and The Serpent and the Rainbow (1988). That said, the film is largely at the service of the writing and characters – the scene-stealer is Alison Brie as a publicity assistant.