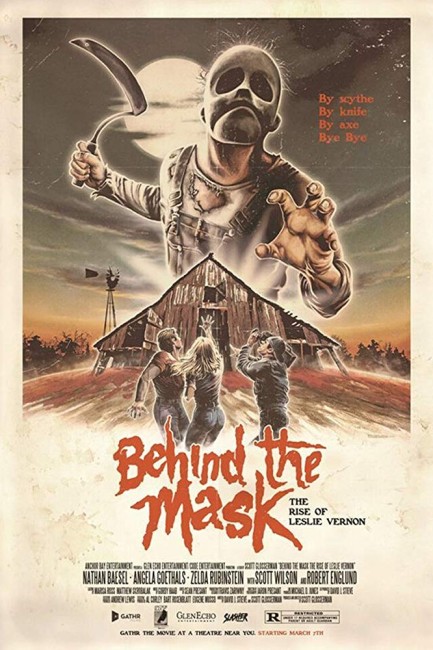 A student camera crew fronted by Taylor Gentry come to sleepy Glen Echo, Maryland to interview and make a documentary about Leslie Vernon. Vernon tells them how he has planned an elaborate show, stalking virginal Kelly Curtis with the intent of killing her and her friends. As they watch, he creates a series of spooky appearances and plants newspaper articles to manufacture the story he claims is his own about being a child who was drowned in the falls and has returned seeking vengeance. During the course of this, the film crew meet the psychiatrist Doc Halloran who is determinedly pursuing Leslie and warns them that Leslie is not who he says. Leslie shows them the farmhouse where he has staged everything in order to get Kelly and her group of friends there where he will taunt and slaughter them, before preparing Kelly to become the Survivor Girl who eventually snaps and fights back. However, as the big event gets underway, things do not quite turn out as planned.

As it starts in, Behind the Mask: The Rise of Leslie Vernon seems to be a variant on the mockumentary/Found Footage film that took over the genre in the latter half of the 2000s. It came along a little too early for the meteoric escalation of the Found Footage genre following Paranormal Activity (2007) and draws more on what came after The Blair Witch Project (1999). Although, if anything, the scenes where we are introduced to a smilingly friendly killer who happily talks about his trade reminds of the earlier hilariously black Belgian mockumentary Man Bites Dog (1992). This however does nothing to let one in on just what a clever, genre-busting film that Behind the Mask is.

Fairly soon in as the narrator (Angela Goethals) starts talking about the spate of killings at Crystal Lake, Haddonfield and on Elm Street – and moreover referring to them as they were actual events – Behind the Mask: The Rise of Leslie Vernon becomes something that is far more than just a mockumentary about a killer. It becomes readily apparent that what we have is like some conceptual collision between Man Bites Dog and Scream (1996), Kevin Williamson and Wes Craven’s meta-movie tribute to the 1980s slasher genre that had characters construing their actions according to the cliches of the genre.

In fact, Behind the Mask rapidly becomes one of the cleverest of these horror movie deconstructions, certainly the most original of several that came out attempting to copy Scream and matched in originality only by The Final Girls (2015) a few years later. Indeed, one would go so far as to say that this is far cleverer in its playing with and deconstructing of genre tropes and cliches than The Cabin in the Woods (2012) was.

There are a number of extremely clever pieces of meta-film. There is a witty scene where we see Nathan Baesal selecting victims, looking for a group of students that contains a mix of jocks, party girls, nerds and what he calls a Survivor Girl (which clearly becomes evident is meant as the genre trope of the Final Girl, a term that was invented by American film studies professor Carol Clover). In subsequent scenes, we see Nathan Baesal obtaining Angela Goethals’ help in staging a scene where intended victim Kate Lang Johnson emerges from her workplace so that she can get a glimpse of him standing sinisterly looking on from the shadows, and others where he elaborately sets up a red herring with a planted newspaper article. We even get Robert Englund introduced as an obsessed psychiatrist obviously modelled on Donald Pleasence in the Halloween series where Nathan Baesal then gets all excited about how he now has ‘an Ahab figure’ hunting him.

Some of the funniest scenes are when the film is jibing at the sexual/feminist interpretations of the slasher film where clearly co-writers Scott Glosserman and David J. Stieve have allowed Carol Clover’s book Men, Women and Chainsaw: Gender in the Modern Horror Film (1992) to serve as a blueprint for the film. Nathan Baesal goes through the tool shed, talking about the heroine finding her empowerment, the need to stage things so she can find a very phallic tool to employ and even how her passage through a grove of trees as descending down the birth canal into symbolic rebirth. Or when he shows them through the house and is asked why he simply doesn’t reach in and open the door when someone is hiding in the closet: “We have a code of ethics. The closet is a sacred space. It’s symbolic of the womb.”

The film gets even funnier when the camera crew abandon their mission and enter the house to try and save the victims whereupon they start disrupting the conventions, including finding the supposed virginal Survivor Girl bouncing atop one of the jocks in the midst of sex, and the clever subsequent twist on everything that comes thereafter.

Disappointingly, Scott Glosserman doesn’t keep the Found Footage look clean and forgets about it whenever he needs mood to set the stage such as the scene at the library when Zelda Rubinstein narrates her story and Robert Englund’s psychologist appears, while of course there is the entire ending where the documentary crew abandon their cameras and the film drops into standard dramatic staging.

Nathan Baesal plays the title role with a wonderfully eager deadpan charm. The film has also wound in a cast of genre regulars that includes Robert Englund, alias Freddy Krueger in the A Nightmare on Elm Street series, playing the obsessed psychologist, and with Kane Hodder, who played Jason Voorhees in several Friday the 13th films, making a small cameo at the door of the house when the documentary crew visit Elm St. There is also Zelda Rubinstein, the pint-sized actress who was most known for her role as the spooky parapsychologist in Poltergeist (1982), playing the role of the librarian in what was her last screen appearance.

Scott Glosserman and co have announced a sequel B4TM and are currently trying to obtain crowdsource funding. Glosserman subsequently went onto direct the documentary Truth in Numbers? Everything, According to Wikipedia (2010) and the non-genre drama The Truth Below (2011).