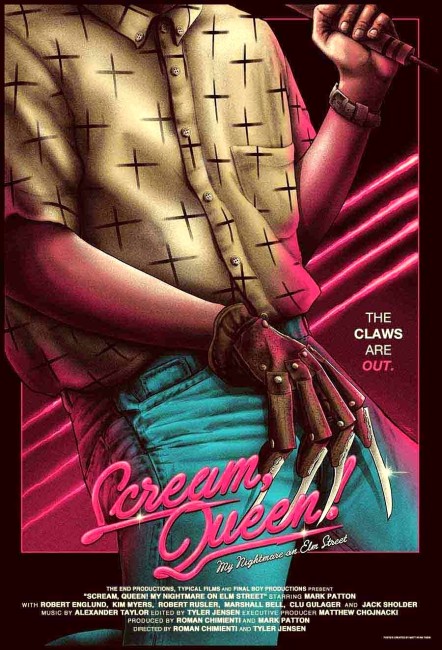 Scream Queen! My Nightmare on Elm Street is a documentary devoted to analysis of the gay subtext (or considering how overt it is perhaps super-text) in A Nightmare on Elm Street Part II: Freddy’s Revenge (1985). In the film, hero Mark Patton visits a gay bar where he meets his coach (Marshall Bell) and takes him to the school locker room where he ties him up for a bondage session. This element has been a talking point ever since the film came out. Now we have a documentary devoted to discussing it.

As though realising that discussion of the film’s gay content is fairly limited, most of Scream Queen is focused on Mark Patton, the actor who played the hero in Freddy’s Revenge. (The documentary is also produced by Patton). The bulk of this depicts Patton’s life story – his growing up in a conservative Baptist family in Kansas; his Coming Out and travelling to New York City in the early 1980s to make it as an actor; his success on stage as a trans character in Robert Altman’s Come Back to the Five and Dime, Jimmy Dean (1982) and the resulting film version; and then his going to Hollywood, moving in with boyfriend Timothy Patrick Murphy and then his big film role with A Nightmare on Elm Street Part II: Freddy’s Revenge.

This is mildly interesting. I can’t say that Mark Patton was ever a name that registered on my radar so I didn’t have any particular unfulfilled need to watch a documentary about his life story. As such, his story feels as though it could be any of a hundred other star biopics/Coming Out stories that appear on various entertainment channels and there is little about here that offers anything remarkable. Much more interesting is when the film gets to discussion of Freddy’s Revenge.

The interesting contention Patton makes is that Freddy’s Revenge caused him to quit Hollywood. He does briefly talk about how the film typecast him as gay and various agents subsequently pressured him to try to play more straight. That aside, the film does not make it entirely clear what led to such a meltdown on his part that he felt he had to quit Hollywood entirely and go into seclusion, nevertheless that is what happened.

It was not until the making of the documentary Never Sleep Again: The Elm Street Legacy (2010) where the filmmakers had to hire private detectives to track him down that Patton finally emerged back on the radar. As a result, he has been rediscovered and now spends time on the convention circuit and making in-person appearances at revival screening of Freddy’s Revenge. The other interesting thing that the film reveals about halfway through is that Patton came out as HIV+ a few years ago and has now become an advocate for such causes.

The most interesting parts of the film is when it gets to discussing Freddy’s Revenge. What becomes rather remarkable is how both the principal creative talents involved in Freddy’s Revenge actively deny any knowledge of the gay subtext. Director Jack Sholder claims to have completely oblivious of it even to the extent of filming the bar scenes in an actual gay bar without any awareness that that was what it was (he offers up the excuse that he went location scouting during the day when it wasn’t open). Screenwriter David Chaskin issued denials that such elements were there and blamed everything on Patton’s acting, although later made conflicting claims. Sholder comes across as having demonstrated a genuine naivete about the gay element in the film but it leaves you wondering how someone could direct a film in which it is so open and remain entirely oblivious about what they are making. Is it credible to believe that a film with such overt gay content is something that only came about by accident?

The latter sections of the film are taken up by a reunion of the principal people involved in Freddy’s Revenge at a convention in Texas (all except for Robert Englund). There is a feud between Mark Patton and David Chaskin over Chaskin’s comments to an Elm Street website where he blamed the gay content of the film on Patton’s acting. The feud was such that Chaskin declined to attend the reunion. There is even a scene on the last day of the convention where Jack Sholder sits down with Patton and tries to convince him that everything happened 35 years earlier and to get over it.

In the concluding section of the film, Patton travels to New York State to meet David Chaskin in his home. Patton goes there wanting an apology. Chaskin offers one and agrees that the gay content was intended by him all along – he says he did so because he thought it the most horrific thing that a WASP kid could experience back in the day. (The film never delves into asking why Chaskin felt he had to deny it was there, which is one of the questions I wish Patton and the filmmakers would have pushed him on). Patton, who is seeking some kind of redress for what he sees as having ruined his career as an actor, obviously finds the closure he needs from this and goes away happily.