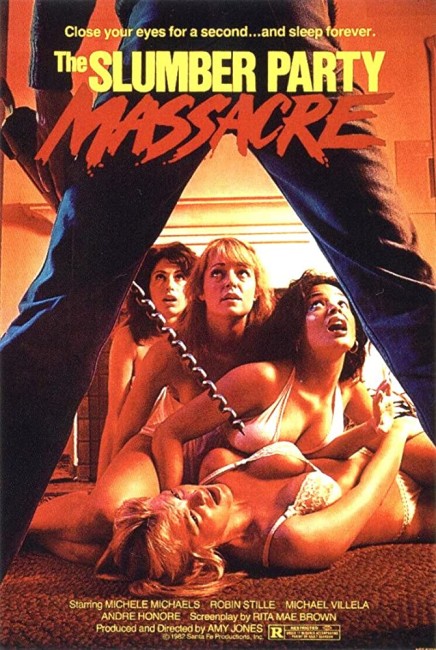 Venice, California. When teenager Trish Devereaux’s parents go away for the weekend, she decides to throw a slumber party for several of her girl friends from high school. However, escaped serial killer Russ Thorn is lurking nearby and begins killing the girls and other assorted bystanders with a power drill.

The Slumber Party Massacre was one of the numerous films that came out amid the slasher fad of the early 1980s following the success of films such as Halloween (1978) and Friday the 13th (1980). The Slumber Party Massacre was released via Roger Corman’s New World Pictures. Perhaps the most intriguing and controversial aspect that dogs the film is the name of novelist and feminist/gay political activist Rita Mae Brown on script. Nowadays, Rita Mae Brown is best known for the classic semi-autobiographical coming-of-age lesbian novel Rubyfruit Jungle (1973), as well as a series of murder mysteries that she co-writes with her cat Sneaky Pie Brown.

For a number of years, the Rita Mae Brown name combined with the presence of a woman director in Amy Jones led many to read The Slumber Party Massacre as a feminist parody of the slasher film. The film’s use of slasher movie cliches was seen as parodying of the genre’s excesses, while others have read all manner of feminist/Freudian symbolism into the killer of the piece wielding a phallic-looking power drill and the climax dependent on group girl power.

However, in watching The Slumber Party Massacre, it becomes difficult to sustain such a theory. Even granting the validity of these arguments, far more of the film seems to buy into the same sexist cliches that are said to be being sent up – there are various shower scenes with the camera focused on the girls in a state of undress, or shots of them taking their tops off to go to sleep that surely seem intended to play into the very gratuitous titillation that the feminist camp slammed the slasher movie for.

Even more so, these scenes come without any discernible trace of irony upon Amy Jones’s part. I watched the whole of The Slumber Party Massacre in vain hoping to find something that signalled that it was a parody. Unfortunately, it feels like an occasion where the line between parody of the genre and mere imitation of it is indistinguishable. The real question is – were one watching the film and it had male names listed as writer and director or no names at all, would one still come to the same conclusion that it was sending the genre up? I doubt it. This leaves one with no recourse but to regard The Slumber Party Massacre as simply a slasher movie that does not operate on any other discernible level than exactly what is up there on screen.

Even as a slasher film, The Slumber Party Massacre is generic and predictable. Amy Jones throws in numerous cliche shots – the camera taking the point-of-view of someone stalking people, red herring shots with cats jumping out and screeching loudly, bodies swinging down from above, even silly red herring shots with the neighbour creeping up behind one of the girls with a blunt object but it turning out that he has only come to batter a snail. Every shot, every suspense set-up feels like a cliche where one can predict exactly where it is going to go.

There are some gory effects with power drills going through bodies and the film reaches an entertainingly bloody climax. There is a tacky shot that cuts from a head being severed to the girls mixing strawberry daiquiris in a blender or schlock shots like the girls opening the front door to find the pizza delivery boy there with his eyes gouged out. This latter does lead to one of the few intentionally funny moments in the film where, following the appearance of the dead pizza boy, we next see the girls sitting around eating pizza on top of the corpse and shrugging “Life goes on”.

Amy Jones (also often credited as Amy Holden Jones) went onto direct three other films, none of which attained much notice. These include the Jamie Lee Curtis vehicle Love Letters (1984), the light fantasy Maid to Order (1987) and the thriller The Rich Man’s Wife (1996). Amy Jones has had greater success as a screenwriter with works like the early Julia Roberts film Mystic Pizza (1988), the children’s film Beethoven (1992), Indecent Proposal (1993), the remake of The Getaway (1994) and the monster movie The Relic (1997), as well as creating the tv series Black Box (2014).

The only cast member to go onto any kind of recognition was Brinke Stevens, who plays the girl killed in the high school. Stevens made her first credited screen performance here and became one of the so-called Scream Queens of the 1980s going on to numerous other parts usually involving her in a state of undress.