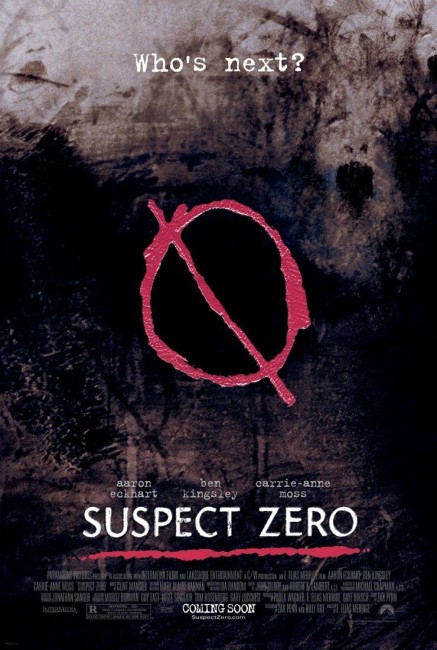 FBI agent Thomas Mackelway is transferred from Dallas to an office in backwater Albuquerque, following a high-profile arrest that became an embarrassment over to his failure to follow proper procedure. Soon after he arrives, Mackelway is again harassed by a serial killer who sends him taunting faxes that contain pictures of people that have been killed all over the country. The latest killing occurs nearby and this allows Mackelway and the FBI to follow clues that show the killer is an unbalanced man named Benjamin O’Ryan. Further investigation shows that O’Ryan has a theory he calls Suspect Zero – that a serial killer can remain undetectable by criss-crossing the country and always changing his methods. Faced with this, Mackelway is baffled as to how they can find O’Ryan. At the same time, O’Ryan leaves Mackelway further clues and messages, urging him to look deeper and see that things are not as they appear.

Suspect Zero was the third film from E. Elias Merhige. Merhige first appeared as director with the incredibly strange art film Begotten (1990) and a number of weird shorts and music video clips before finding critical acclaim with Shadow of the Vampire (2000), which posited the amusing notion that Max Schreck was a real vampire during the shooting of Nosferatu (1922). Shadow of the Vampire received much attention and a number of award nominations for Willem Dafoe’s performance.

It is a surprise after making a number of films and shorts that show an intensely weird arthouse ethic, as well as the intelligent and conceptually challenging Shadow of the Vampire, that for his third film E. Elias Merhige turns to make a disappointingly generic serial killer thriller. Suspect Zero is not entirely uninteresting, certainly not as much as the outright hostility it was greeted with by US critics when it premiered – but it is a comedown on what one expected from Merhige after Shadow of the Vampire (even if it comes produced by no less than Tom Cruise’s own production company).

Merhige certainly offers up a captivating opening – a bespectacled middle-aged man sits at a booth in an ordinary diner in the middle of a desert highway, Ben Kingsley appears out of nowhere dressed in black, showing the man some pictures that we never see and taunting him, before reappearing in the backseat of the man’s car as he drives away. The scene and especially seeing Gandhi himself Ben Kingsley in such a threatening role bodes well for what is to come.

Alas, Merhige seems to lose it after that point. The script for the better part never puts the grips on us in terms of tightly wound contortions or in providing a puzzle to work out. Merhige never develops the suspense. There is the odd scene – the sinister cool of the truck creeping up behind children playing in a playground and the casually understated image of an overturned child’s bicycle left with its wheel spinning as the truck departs.

In the constant jumps away to scenes seen in black-and-white or through a partial colour filter and of Ben Kingsley doing drawings and scrawling cryptic notes, it feels like E. Elias Merhige is too absorbed in stylistic affect to draw the audience into what is going on (even if what is going on does eventually become clear in retrospect). Suspect Zero is a film that asks a lot of an audience. It keeps them at a cool arm’s length for a large part – both in terms of telling us what is going on and in terms of involving us in the suspense – and the eventual payoff is not quite worth it.

Certainly, the talk in mid-film about serial killers hunters, FBI psi ops agents and the Suspect Zero theory do put some whacked spins on what seems like a standard serial killer story and make one wonder where on Earth it is all going. In the last half, the film develops a surprising twist [PLOT SPOILERS] – that Ben Kingsley is not a serial killer at all but a psychic (trained by the FBI) who follows intuitive flashes and that he is actually hunting down and eliminating serial killers.

The concept of the serial killer hunter has proven of fascination to Hollywood before – there was the lame Red Team (2000) and in particular the novel Thinning the Predators (1996) by Daina Graziunas and Jim Starlin, which has been optioned as a film property for some years and bears striking plot similarities to Suspect Zero.

It is after this revelation, where much of what has been happening is turned on its head, that Suspect Zero picks up somewhat. Merhige does develop a quite reasonable suspense sequence with Aaron Eckhart pursuing the truck on the highway and to the fairground. However, the end is hokey and not the show capper that one expected. It is only here that the revelations throughout the film start to seem contrived – all the taunting faxes to Aaron Eckhart and the zeros left drawn on victim’s bodies prove to be red herrings that have been created for the sole purpose of misdirecting the audience. This is especially so in the case of the title and the Suspect Zero theory. The Suspect Zero concept is a novel idea and one that gives an intriguing insight into the possibility of a new type of serial killer, but unfortunately proves to have been a total red herring that has nothing whatsoever to do with the rest of the film.