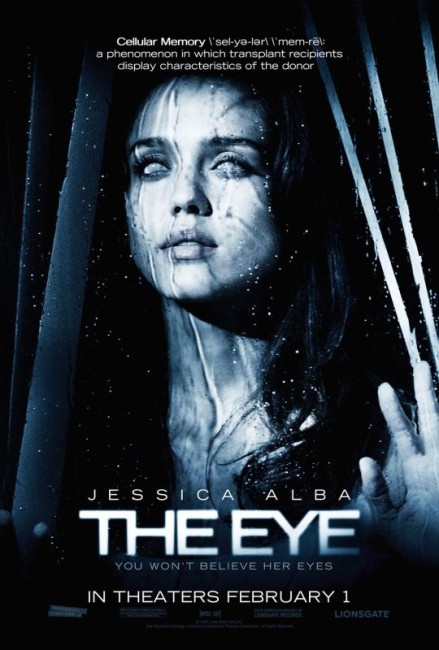 Sydney Wells has been blind since the age of five. She is now given a set of corneal grafts and emerges from the operation able to see for the first time in many years. Almost immediately after the bandages are taken off, she starts to see shadowy figures that are not there. As these figures persist and start to affect her sanity, she realizes that what she is seeing is the dead. She comes to believe that the visions have been inherited from the donor of the corneas. She heads on a quest to a village in Mexico in search of a girl with second sight who committed suicide after being persecuted as a witch and whose spirit Sydney now believes is calling to her to help prevent a disaster.

The Thai/Hong Kong-made The Eye (2002) was one of the most successful films to emerge out of the modern Asian horror fad. It had a genuinely unsettling and spooky atmosphere and proved a hit at international film festivals. It also served to bring to the fore Thailand’s The Pang Brothers, Oxide and Danny, who are in this author’s opinion two of the finest genre directors at work in the world today. The Pang Brothers sequelised The Eye with the even better The Eye 2 (2004) and then The Eye 10 (2005).

The directors assigned are French newcomers David Moreau and Xavier Palud who previously emerged with the low-budget digital-shot Backwoods Brutality effort Them (2006). The script comes from Sebastian Gutierrez, director of horror efforts like She Creature (2001), Rise (2007) and Elizabeth Harvest (2018), as well as scripter of Gothika (2003) and Snakes on a Plane (2006).

To his credit, Sebastian Gutierrez follows The Eye 2002 very closely, almost scene for scene, adding and removing very little from the original. There is slightly more embellishment and emphasis on the story of the dead cornea donor, as well as the expansion of the scene where Lee Sin-Je sees ghostly figures in a restaurant that now turns the entire restaurant into a ghost building. Oh, and Jessica Alba lives in her own apartment, rather than with her grandmother as in the original. Other than that, the two films are almost identical. Although sometimes Sebastian Gutierrez follows the original too closely in areas where one wished that the remake might have departed, like the tired plot in the second half about trying to track down the donor of the corneas.

David Moreau and Xavier Palud closely replicate all the various scares from the original. There is the young boy looking for his report card, the neighbour in the hospital bed and the young cancer patient who get taken away, the room that keeps changing into another room, the girl that Jessica Alba meets in the street walking away from her own dead body at an accident scene, the body in the elevator, the scene where Alba does not recognize her own face in a mirror and the big-scale climactic explosion.

It is all there and maybe for anybody who has not seen The Eye 2002 these scenes might hold a frisson. However, for anyone who has, The Eye 2008 is like a pallid copy of the original that lacks any sting. Case in point being the scene with the man hovering a few inches off the ground in the elevator – in the original, the scene started with the man facing the wall and circling the entire way around the small enclosed space before turning to Lee Sin-Je. There was an unbearable sense of dread to the scene, which must surely count as one of the spookiest moments in any horror film of the 00s. Here the man does nothing more than briefly creep across the elevator towards Jessica Alba and the scene fails to provide much of a scare.

Part of the problem is also that The Eye is being made for an American PG 13-rated audience, something that has necessitated that other Asian horror remakes like The Grudge have had to soft pedal their horrors for the all-important teenage demographic. Almost all of the above-listed English-language remakes are tepid copies of their far spookier Asian originals – indeed even when the Pang Brothers were imported to the US to make the original English-language The Messengers (2007), their unearthly style seem swallowed up by the Hollywood machine.

The other thing that David Moreau and Xavier Palud do that considerably weakens the atmosphere of the original is to add a host of unnecessary effects. We get the addition of ghostly figures that never seem to not do anything more than turn up and howl unearthly screams at the camera. After about the fourth time these figures appear, this in an effect that starts to tire. A good many of the new scare scenes have also been signposted by sound effects to the point of obvious overkill. The Pang Brothers had neither of these and created an unsettlingly unearthly mood that made The Eye 2002 into a genuine classic. By comparison, the remake is one where the horror has been watered down and every scare having a red flag held up to announce it by the sound effects department.

Xavier Palud and David Moreau appeared to part ways after The Eye with Palud returned to France for the thriller The Blind Man (2012) and Moreau went on to make the Last People on Earth film Alone (2017).