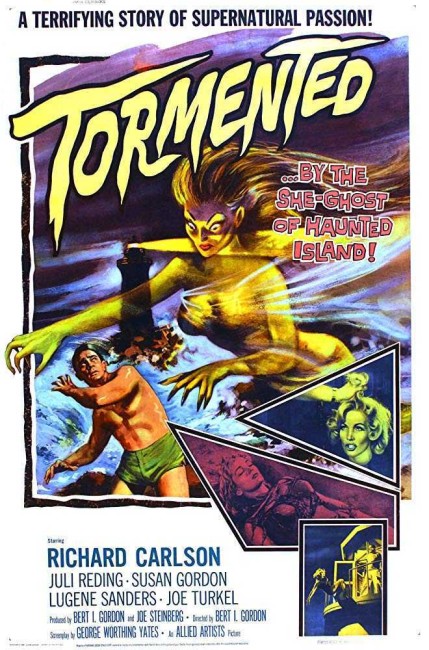 Jazz pianist Tom Stewart has been hiding away in a lighthouse on an island. He is tracked down there by Vi Mason, a singer that he has been having an affair with. Tom is about to marry Meg Hubbard and wants nothing more to do with Vi. Vi promises to expose the affair, swearing that nobody will marry Tom but her. However, as Vi leans against the rail of the lighthouse, it gives way beneath her. Tom declines to come to her aid and she falls to her death in the sea below. Afterwards, as he prepares to marry Meg, Tom is haunted by Vi’s ghost who appears to him everywhere, even stealing his wedding ring, all the while insisting that he will marry nobody but her.

Director, screenwriter, producer and virtual one-man band Bert I. Gordon emerged in the 1950s and soon gained a reputation for making low-budget giant bug (and occasionally big and little people films) with the likes of King Dinosaur (1955), The Cyclops (1957), The Amazing Colossal Man (1957), Beginning of the End (1957), Attack of the Puppet People (1958), Earth vs the Spider (1958), War of the Colossal Beast (1958) and Village of the Giants (1965), as well as latter day revivals such as The Food of the Gods (1976) and Empire of the Ants (1977). These were B films and with them Bert I. Gordon (or Mr B.I.G. as he was nicknamed) developed a reputation for painfully impoverished special effects, which he usually conducted along with his wife Flora. In the 1960s and beyond, Gordon began to branch into other genres making fantasy films like The Boy and the Pirates (1960) and The Magic Sword (1962); ghost stories such as Tormented and Picture Mommy Dead (1966); the hilariously sleazy psycho film The Mad Bomber (1972); and several occult films with Necromancy (1972), The Coming/Burned at the Stake (1981) and Malediction/Satan’s Princess (1990).

Tormented was Bert I. Gordon’s first venture into supernatural horror after the 1950s giant bug and person cycle began to dry up. The ghost story was, hard to believe, a relatively new concept in American cinema at the time, not having much in the way of a history. Up until The Uninvited (1944), most American ghost stories were of the Old Dark House variety that always revealed what happened to be of mundane origins.

Bert I. Gordon’s handling consists of crudely atmospheric pop-up effects – Richard Carlson hearing gulls squawking his name; footprints appearing alongside his in the sand; the record made by Vi that keeps reappearing on the turntable after he takes it off and throws it away; he thinking he finds a body in the surf, which turns out to be a shape formed by seaweed; he throwing out what he thinks is Juli Reding’s talking head but it turning out to be a bowl of flowers. This reaches a rather funny point during the wedding scene where the doors of the church burst open, the flowers start wilting and the minister’s Bible turns from the Wedding Ceremony to the Burial of the Dead.

Bert I. Gordon’s direction is static and unimaginative throughout most of this – it is important to note that Tormented exists on the level of crude pop-up effects rather than the generation of any atmosphere. Gordon does manage to create one reasonable scene – young Susan Gordon (Gordon’s own nine year-old daughter) asks to see Richard Carlson’s wedding ring, he puts it on her finger, only for her to insist that she doesn’t have it a moment later and for Carlson to see that he has placed the ring on a phantom hand, which keeps trying to crawl out as he tries to prevent Susan from going underneath the piano to look for the ring.

Tormented is, when it comes down to it, a variant on an Edgar Allan Poe story like The Black Cat (1843) or The Tell-Tale Heart (1843) about a guilty murderer being supernaturally haunted by his conscience. The film arrives at a peculiarly touching ending where Richard Carlson and Juli Reding’s bodies are found washed up on the beach, wrapped around each other and with the missing wedding ring on her hand.