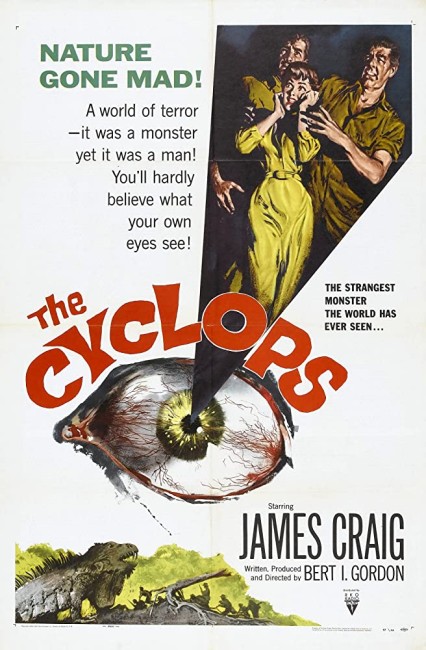 Susan Winter arrives in Mexico in search of her fiance Bruce Barton who has been missing for three years. She is joined by bacteriologist Russ Bradford, a friend of Bruce; Marty Melville, a prospector searching for uranium; and pilot Lee Brand. She asks the local governor for permission to fly into the Tarahumare Mountains. The governor disapproves of the expedition and tries to insist that one of his men goes too but Marty knocks the man out and they take off. However, once over the valley, turbulence forces them to make a landing. Melville finds the area to be rich in uranium and urges Lee to abandon the others and head back so that he can stake a claim. Meanwhile, Russ and Susan discover the valley is inhabited by animals grown to giant size by the radiation. They then encounter a giant deformed human and realise that it is the mutated Bruce.

Bert I. Gordon gained a reputation as a director in the 1950s for his giant animals and people movies. Gordon first appeared with King Dinosaur (1955) and The Cyclops was his second film. Gordon went onto make other B-movies of the era such as Beginning of the End (1957), The Amazing Colossal Man (1957), Attack of the Puppet People (1958), Earth vs the Spider (1958) and War of the Colossal Beast (1958), all featuring giant animals and/or people.

Gordon would return to giant animals repeatedly over the next two decades with other efforts such as Village of the Giants (1965), The Food of the Gods (1976) and Empire of the Ants (1977), although it became apparent that while filmmaking had become vastly more sophisticated since the 1950s, Gordon had not. In the same period that Spielberg turned out Jaws (1975), for instance, Gordon was still making films involving cheap optical blow-ups of standard insects and animals. Gordon dabbled with other genres – fantasy, the psycho-thriller, the occult, the nudie (see below for a full list of his genre films) – but it was the giant animals film that remained his trademark such that he earned the nickname Mr B.I.G.

The Cyclops sets in with all the trademark aspects of a Bert I. Gordon film. There is the crude direction and photography. The drama is dreary going. Even when the party encounter the cyclops, all that we get is a scene of them trapped in a cave and blinding the cyclops and then the film is over (the entire show only runs to 66 minutes in length). And naturally, there is Gordon back at his old standby of trying to persuade us that regular optically enlarged animals, birds and insects are giants. To his credit, Gordon does an okay job of convincing us we are in a remote valley when in fact the film never even ventures beyond Bronson Canyon in L.A.’s Griffith Park, the famous location used in numerous B Westerns and serials to Robot Monster (1953) and episodes of Star Trek (1966-9).

The Cyclops also has Gordon readily tapping into the atomic monster fad that had begun only a few years earlier with the successes of The Beast from 20,000 Fathoms (1953) and Them! (1954). Gordon’s one clever idea is to take the Greek myth of the Cyclops – Polyphemus by name who was encountered by Odysseus and his men in The Odyssey, imprisoning them in a cave before they escaped by plunging a stake into its eye – and transport it into the age of the atomic monster, making the cyclops an actual mutated human monster and retelling everything as a lost valley story.

The same idea also informed the earlier, much better budgeted Dr Cyclops (1940) – although there it was miniaturised people up against an ordinary-sized (giant) scientist. The giant with the deformed face was an image that Gordon returned to in War of the Colossal Beast, although here it is a much more rudimentary figure. Certainly, Gordon gave the atomically mutated giant in The Amazing Colossal Man far more pathos than he does the cyclops here.

The only recognisable name present in the cast today is Lon Chaney Jr, who had come to fame as The Wolf Man (1941) in the previous decade and maintained a genre career before a slide into Z-budget films a few years later. He has a supporting role as one member of the party who is ruthlessly determined to obtain uranium where Chaney at least animates his usual jowly, hangdog presence with more fierce determination than usual.

The other actors fade into the scenery. Gloria Talbott did play the lead in Daughter of Dr Jekyll (1957), which was released on a double-bill with The Cyclops, and the next year went onto her best-budgeted and final genre role as the wife who was able to make the title claim that I Married a Monster from Outer Space (1958). The top-billed name of the film is actually James Craig who had appeared as the lead in a number of B Westerns throughout the 1940s, although is a forgotten name today.