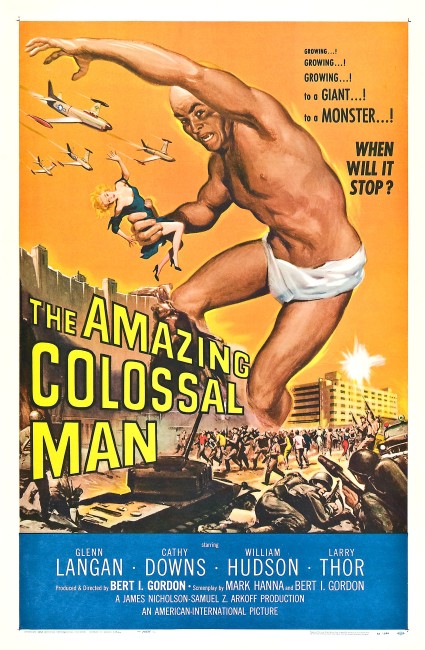 A plutonium bomb test is being conducted at Desert Rock in Nevada. The bomb is detonated but the explosion fails to go off. As the military try to figure out what happened, a small civilian plane crashes in the target area. Colonel Glenn Manning rushes out to save the survivors but is caught up in the delayed explosion as it finally goes off. He is taken to hospital in critical condition. Manning’s fiancee Carol Forrest is frustrated by the military in her attempts to get in to see him. She manages to sneak into the base and is shocked to discover that Manning is now a giant as a result of exposure to the radiation, which is causing him to grow eight to ten feet a day. However, the increase in size is also causing Manning to become megalomaniac. He escapes from the base and goes on a giant-sized rampage through Las Vegas as the military attempt to bring him down.

Looking back, director/producer Bert I. Gordon must have found the acronym his initials bequeathed him a remarkable coincidence – as a filmmaker, he quickly earned the acronym of Mr B.I.G. There are few people whose names are more appropriate to their artistic output. The greater portion of Bert I. Gordon’s films falls into themes dealing either with giantism or miniaturisation of either humans or insects with the likes of The Cyclops (1957), Beginning of the End (1957), Attack of the Puppet People (1958), Earth vs the Spider (1958), and of course The Amazing Colossal Man and its sequel War of the Colossal Beast (1958), as well as the subsequent likes of Village of the Giants (1965), The Food of the Gods (1976) and Empire of the Ants (1977).

Gordon’s two greatest influences during the 1950s appear to have been Them! (1954) – the first giant atomic insect film – and The Incredible Shrinking Man (1957) – about a man shrunken to miniature size by an atomic cloud. The two of these inform almost all of Bert I. Gordon’s above-listed films. Indeed, The Amazing Colossal Man was rushed into release only eight months following The Incredible Shrinking Man.

Most of Bert I. Gordon’s output is not particularly good and The Amazing Colossal Man is probably the best of his films from the 1950s. His single best film is the mind-boggling The Mad Bomber (1973). That said, even a better-than-average Bert I. Gordon film still makes for only a barely passable B movie. Gordon’s direction is static. The special effects are not that special – Gordon does make economic use of A-bomb test footage and some of the scenes with the giant-size Glenn Langan are okay, but most of the effects shots have a profusion of matte lines around them.

The script is routine – Gordon co-writes with Mark Hanna who also wrote Attack of the 50 Foot Woman (1958) the following year, one of the worst B movies of the 1950s (and another effort trying to copy The Incredible Shrinking Man). There are several moment of silliness such as Glenn Langan’s heart failing to grow at the same rate his body does for no clearly defined reason.

That said, The Amazing Colossal Man has moments where it transcends being a typical Bert I. Gordon film. There are wonderful little throwaway images like where Glenn Langan picks up a tiny Bible to read. Or his rampage through Las Vegas, which has been chosen with great appropriateness as a location – we watch him picking up crowns off buildings and finding shoes that are his size, as though to say that Las Vegas is a fantasy city, one place where a giant might seem perfectly at home.

On the other hand, Gordon fails to give any pathos to the scenes of Glenn Langan being shot down – he should have but The Amazing Colossal Man is ultimately too much of a B movie. Glenn Langan gives an okay performance of unstable sanity, although Cathy Downs is terribly wooden as his wife.

Bert I. Gordon later made a sequel War of the Colossal Beast (1958) where Dean Parkin took over the title role from Glenn Langan. Homages to The Amazing Colossal Man can be found in Honey I Blew Up the Kid (1992) and Monsters vs Aliens (2009).