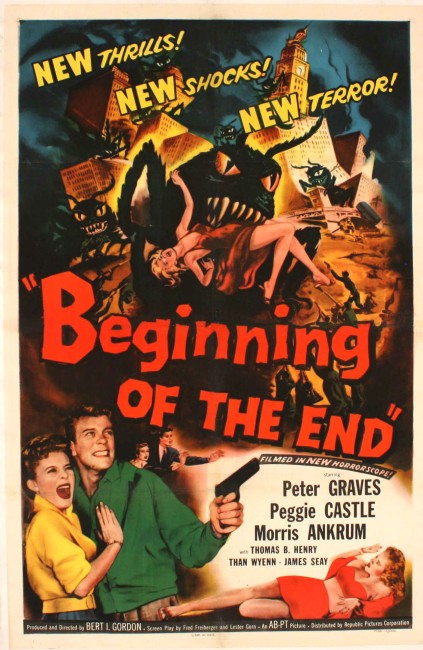 Journalist Peggie Castle is heading to Ludlow, Illinois when she is stopped by a military roadblock that refuses her entry into the town. Heading to the military command post, she learns that an unknown force has obliterated Ludlow and caused all its people to vanish. She goes to Ed Wainwright, an entomologist who is working on a project to create giant-size plant food at a nearby botanic research centre. As she investigates with Ed, they encounter giant grasshoppers. Ed theorises that the grasshoppers ate some of the radioactive pesticides the centre was experimenting with, which caused them to grow to giant size. The military now try to deal with the onslaught of hundreds of giant grasshoppers as they head towards Chicago.

The 1950s was the great era of the atomic monsters and giant bug movies. Everything began with The Beast from 20,000 Fathoms (1953) with its atomically revived dinosaur. Them! (1954) came shortly after offering up atomically mutated giant ants. After that, the way was open and numerous revived dinosaurs marched across the streets. So in equal numbers did giant animals and insects where atomic radiation was almost always employed as the explain-all. The genre would soon run the gamut of the zoological spectrum from giant octopi – It Came from Beneath the Sea (1955), spiders – Tarantula (1955) and Earth vs the Spider (1958), crabs – Attack of the Crab Monsters (1957), scorpions – The Black Scorpion (1957), mantises – The Deadly Mantis (1957), molluscs – The Monster That Challenged the World (1957), leeches – Attack of the Giant Leeches (1959), lizards – The Giant Gila Monster (1959), moths – Mothra (1962), to humans – The Amazing Colossal Man (1957) and even a radioactive possessed tree – From Hell It Came (1957).

Bert I. Gordon was a director who found his calling in the giant animal movie of the era. Beginning with King Dinosaur (1955), Gordon made his name with a series of films involving entertainingly cheap effects. The greater portion of Bert I. Gordon’s films throughout the 1950s falls into themes dealing either with gigantism (or occasionally miniaturisation) of either humans or insects with the likes of The Cyclops (1957), The Amazing Colossal Man and its sequel War of the Colossal Beast (1958), Attack of the Puppet People (1958), Earth vs the Spider, and subsequent to the 1950s the likes of Village of the Giants (1965), The Food of the Gods (1976) and Empire of the Ants (1977). (See below for Bert I. Gordon’s other films).

Beginning of the End is a sterling example of the 1950s giant insect film. It is not long into the show before Gordon is wheeling out atomic radiation as explain-all – in this case, in the form of radioactive pesticides. As with many of the films of the atomic era, the giant bug onslaught is quickly seen in terms of Biblical analogies. The dialogue throws around ominous portents: “the time will come when the beasts will inherit the Earth” and the inevitable “this is the beginning of the end.” The film also manages to establish what I believe is the first use of the cliche of scientists racing against the clock to perfect an experimental solution to the problem before the military threaten to obliterate an inhabited area to wipe out the requisite menace.

Bert I. Gordon was notoriously cheap and corner-cutting when it came to his effects. Aside from a few montage scenes of military attack, we see very little of the giant grasshopper onslaught as they move across Illinois – most of this happens off-stage and is something that is only described from the military command post. The initial devastation of the town looks exactly like Gordon had either managed to go out and film or more likely obtained some stock footage of a town that had been devastated by a tornado.

The giant grasshoppers are represented by photographically enlarged insects, as was the case with many films in the giant bug cycle of the 1950s. Almost all of their scenes interacting with humans and soldiers come with thick matte lines or else the grainy footage of optical inserts. When it comes to the military combat scenes, the grasshoppers have simply been optically inserted into stock footage of military manoeuvres.

Nevertheless, most of these scenes work passably well for what was accepted back in the era. There are some not bad effects of the grasshoppers climbing the skyscrapers of Chicago, although in later shots it becomes clear that they are simply crawling across a photographic blow-up rather than models. In other shots, like where Peter Graves and a soldier encounter a grasshopper in a back alley, the insect has simply been superimposed.

The weakest scene is the grasshoppers’ final despatch where they are lured into the lake with a mating signal where all that we get are some brief and very unconvincing shots of them milling about on the sand and then floating dead in the water, which hardly feels dramatically adequate. Also the means of despatching the grasshoppers is wildly uneven – in the military scenes, they continue on despite being held off by armed soldiers with flamethrowers and tanks, while in the later scenes Peter Graves and the others are able to easily eliminate them with ordinary machine guns.