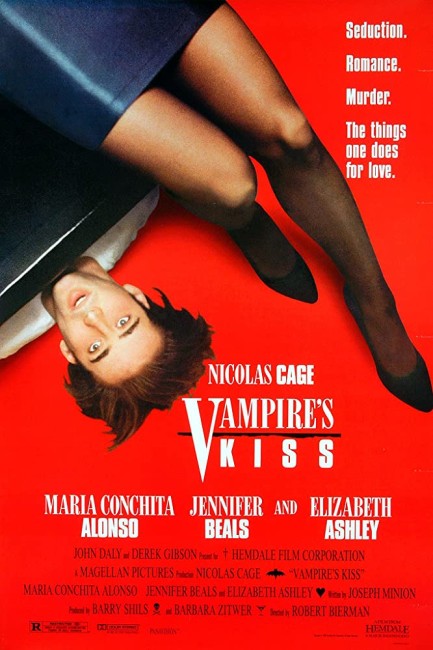 Peter Loew, a literary agent in New York City, meets the strange Rachel in a nightclub and takes her home for the night. In bed, she sinks her teeth into his neck but afterwards mysteriously vanishes. Believing Rachel to be a vampire and that she has infected him with her bite, Loew becomes increasingly mentally unstable. He terrorises his secretary Alva with an obsession over finding a copy of an old contract that has been lost in the office files. Eventually, he buys plastic fangs and starts drinking blood, before begging people to stake and kill him.

In a genre that has managed to incarnate its central dinner-suited, be-canined figure everywhere from the Harlem disco to Swinging Sixties London scene, to Bikini Beach, trailer parks, up against cheerleaders and kung fu, and as a figure animated by aliens to take over the Earth, Vampire’s Kiss could still manage to come top contender in any future award for the silliest vampire movie ever made.

Vampire’s Kiss has the impression of being one of those films that everyone seemed to think was a good idea at the time. Screenwriter Joseph Minion was a hot name on the back of writing Martin Scorsese’s urban anxiety comedy After Hours (1985) and had also written the obscure Julia and Julia (1987), which has Kathleen Turner slipping between lives in two alternate worlds. British director Robert Bierman was a relative newcomer who had directed the D.H. Lawrence adaptation The Rocking Horse Winner (1983) and the serial killer tv movie Apology (1986) but has made little else subsequently.

Vampire’s Kiss gives the impression that everyone who wrote the cheques thought the combined talents would produce a gonzo or edgy indie hit. Instead, the result left most audiences scratching their hands. Critics were divided with Vampire’s Kiss received as many good as bad reviews, while audiences reacted largely indifferently. That said, there have been some efforts in the 2010s to revive Vampire’s Kiss as a cult film.

Vampire’s Kiss sits just between the admittedly amusing and the unrestrained lunacy that is usually the province of either extremely pretentious or extremely bad movies. There are some very funny moments parodying the vampire film – the giddily silly sight of Nicolas Cage running about trying to talk with plastic fangs in his mouth, chasing pigeons with his fangs in (whereupon Robert Bierman delightfully cuts to him giving a loud burp in an apartment strewn with pigeon feathers), sleeping under an overturned couch as a makeshift coffin, begging passers-by on a street to stake him with a fence-post and his despairing attempts to kill himself with a gun unaware that it is loaded with blanks and then believing he is unkillable. The film toys with letting us not be sure if the idea of the vampire is all in Nicolas Cage’s head or not – which is certainly a unique perspective that only the audacious Martin (1976) had conducted before – eventually coming down on the side that it is.

However, the point of Vampire’s Kiss seems to elude one. Its’ big joke seems to be in having Nicolas Cage pop up every two minutes to roll his eyes, scream his head off and psychotically intimidate mousy Latino secretary Maria Conchita Alonso. With Nicolas Cage, who was then at the early point in his career and had not quite found fame as an A-list name, Completely Over-The-Top was merely warming-up territory for a role. Cage gives an astonishingly silly performance that is surely one of the most bizarrely lunatic pieces of acting ever conducted to film. Alas, five minutes of this performance renders any eventual weirdness that the film is building up to an inconsequentiality.

In failing to reign Nicolas Cage in, Robert Bierman allows him to dominate the film – Cage is so far gone even a third of the way into the story that there is nowhere left for the film to go to from there. You could easily imagine a much more normal film that started with an average actor and built up to the lunacy we have here. We are not even sure what the bullying and intimidation of Maria Conchita Alonso is about other than more opportunity for Nicolas Cage to go nuts. Jennifer Beals, a talented and underrated actress, does little more than deliver a silly role while strutting about in lingerie (you can visibly see the pasties she is wearing in bed with Cage) and snarling with her fangs.